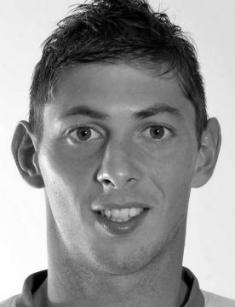 The Argentinian soccer player Emiliano Sala used to be a forward in his country’s clubs and France Ligue. The young man’s results were promising, and his career would definitely improve if it had not been for the tragedy that happened in January 2019.

The would-be sportsman was born in Cululú, Santa Fe, Argentina on October 31, 1990. The boy’s father was a truck driver. Soon, the family moved to Progreso located in 600 km. from Buenos Aires. Emiliano had two siblings, the brother Dario and the sister Romina.

Sala was dreaming about a soccer career since his childhood and passionately supported the Argentinian club Independiente; Gabriel Batistuta was his icon. Emiliano began to play at four and joined the youth club San Martín de Progreso. In 2005, the young man was invited to Proyecto Crecer and spent there four years.

The athlete started his career in French FC Girondins de Bordeaux and debuted at the beginning of 2012. He could not become a permanent member of the first lineup and spent some time in Orléans and Niort on loan for two seasons. Emiliano’s performance was excellent: before he returned to Bordeaux, the sportsman participated in 74 matches and scored 39 goals.

Despite his talent, Sala failed to settle in the team; when half of the season 2014/2015 was over, Emiliano went to Caen. The club wanted to get him before, but Bordeaux stood against it. In February 2015, the player debuted in the new lineup and scored the first goal in the third match.

Six months later, Emiliano transferred to Nantes participating in French Ligue 1 and stayed there until the beginning of 2019. He went to the field when the season 2015/2016 was opened and scored his first goal in December, during the game against Ajaccio. Although the season brought only six goals to the athlete, he finished it as the top goal scorer of his club.

The second season with the same team was better: the young man’s results were twice as much as before, and he was named the top scorer again, just like in the season 2017/2018. Emiliano became the record-breaker of his club.

Further on, the main coach of Nantes changed. Miguel Cardoso introduced some novelties, and Kalifa Coulibaly was appointed the first-lineup forward. At that time, the Turkish club Galatasaray tried to buy Sala but failed.

Sala continued to score goals, and Cardoso often had him step in for other players; when he saw the sportsman’s results, he decided to return him to the starting eleven. In fall 2018, Miguel was fired, but Emiliano did not lose his position with a new coach and proved to be the player of the month in October.

At the beginning of 2019, fans learned the news about Emiliano’s transfer to Cardiff City; the administration of Nantes earned about $20 million on this deal. Sala’s salary was €30 000.

Few facts are known about the athlete’s personal life: he preferred to keep the details secret. Emiliano dated the Argentinian model Berenice Schkair.

Although Emiliano was often busy, he was in touch with his fans and regularly posted photos from games and practice on Instagram. Besides, there were personal pictures with friends or alone.

As long as Sala signed a contract with the new club, he had a medical examination in Cardiff and then returned to Nantes. The young man wanted to take his belongings and say good-bye to his former teammates; he was supposed to go to the new home on January 21 and have the first training with the team in the morning.

Nothing foretold troubles. On January 21, 2019, the athlete left France for Wales. The soccer agent Mark McKay provided him with the plane; only Emiliano and a pilot were on board. However, something went wrong. The pilot asked permission to land near the Guernsey island; a flight operator lost the contact with the plane at the height of 700 m.

A rescue team started looking for the sportsman immediately; there was a theory about a possible air crash: the plane was going low, and there were 24 km. to the nearest island.

Coaches, teammates, and the family were shocked by the tragedy. The scheduled training was canceled, and people brought flowers to the stadium. Everybody was praying and hoped for the better; athletes were cheering up each other in social networks.

Five helicopters and three planes were used; a large territory was explored, but no signs of the plane, pilot, or passenger were found. Experts analyzed all the date and decided to stop the search: they believed there was a crash, and the chances to find a survivor were too little.

Relatives and fans did not accept that and tried to persuade the officials to continue: they believed the athlete was alive and needed medical help. Even Lionel Messi appealed to the police in an interview and asked them to go on.

Besides, Sala’s girlfriend expressed her doubt about the accident on Twitter and asked the police for a thorough investigation. Soon, the search was renewed. On February 4, 2019, the media reported that the plane pieces were finally found at the bottom of the English Channel. When the island police refused to seek for the plane, private teams stepped in. The marine scientist David Mearns represented the player’s family and controlled the operation. It was discovered that both Sala and the pilot died immediately after the crash. Today, colleagues and relatives are mourning; they cannot believe the tragedy happened.

Emiliano Sala’s net worth was $5 million by the moment of his death.