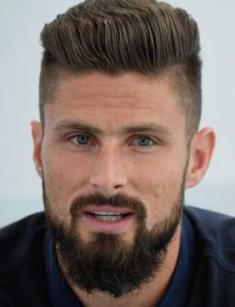 The sports press nicknamed Olivier Giroud “the charm striker” in 2012. However, the young man is famous not only for his professional achievements and personal charisma but also the scandal that almost destroyed his family.

According to the athlete, what happened made him stronger. It was true: Giroud was named one of the best attacking players in France along with Zinedine Zidane.

The future player was born in Chambéry, France, on September 30, 1986. Soon after the boy was born, the family moved to Froges.

Similar to many boys, Olivier liked to play soccer in the yard. As the parents noticed their son’s enthusiasm, they took him to a local soccer club, Olympique Club de Froges.

The boy spent five years in the youth team and transferred to the youth academy of the professional club Grenoble before his 13th birthday.

Giroud debuted as a professional soccer player in March 2006. However, his endeavor was not enough to settle in the first eleven of the team.

The next year, Grenoble sent the sportsman to Istres on loan and sold him to Tours by the end of the season. The young man proved to be a notable figure in the new environment and brought many benefits to his new teammates; he participated in 24 out of 44 matches.

Giroud’s career was developing gradually. In 2010, he signed a contract with Montpellier and scored a goal in the debuting game against Győr; it gave the club a beautiful victory.

In 2011, the invitation to the France national team followed. Olivier scored his first goal for his homeland in the third match; he was included in the UEFA Euro 2012 players’ list.

The same year, the man moved to England. Chelsea and Arsenal were ready to welcome him; the agreement with the latter was reached. Olivier’s contract implied four years with the club.

English fans were skeptical about the newcomer and his specific approach. Unlike the majority of strikers, Giroud did not play in the whole field but concentrated on particular segments instead. As a result, there were no gaps between opponents’ lines, but classic soccer lovers were not used to it.

In 2014, the athlete began to collaborate with various companies and participate in their commercials; he had advertised only sports goods by Puma before. His advertising interests expanded: one could see the man in Hugo Boss perfume and Carlsberg beer campaigns.

The same year was marked with the first severe trauma: Giroud got his ankle injured during the Premier League match against Everton. Doctors suspected a fracture, and a thorough examination proved the diagnosis. The athlete was supposed to recover in ten weeks, but he managed to do that earlier. Nevertheless, the coach of Arsenal did not let him play so that Giroud’s condition would not deteriorate.

In UEFA Euro 2016, Olivier scored the first goal of the France national team; the Romanian could not do anything. The game against Germany was notable for Giroud’s support of Antoine Griezmann who proved to be the star of the championship.

January 2018 turned over a new leaf in the athlete’s career. Arsenal agreed to sell the striker to Chelsea; rumors had it the club paid approximately €18-20 million. Giroud’s contract was supposed to last for a year and a half; his weekly earnings were £ 90 000. By the moment Olivier left Arsenal, he had played in 252 matches and scored 105 goals.

The sportsman married his old friend, Jennifer, in 2011; their daughter Jade was born two years later. Fans believed that Giroud’s marriage was strong and happy, but a scandal broke out in 2014.

The press revealed that a woman entered Olivier’s hotel room before the match against Crystal Palace. It was the lingerie model Celia Kay. They kept denying their affair, even though they were caught red-handed: The Sun published a picture where both of them were naked.

Giroud had nothing to do but admit his guilt. He did not participate in matches for a while and took a family therapy to save the marriage. The spouses overcame the challenging period; their son Evan was born in 2016.

In February 2018, the player debuted as a Chelsea member against West Bromwich. Thanks to Oliver’s assistance, his colleague Eden Hazard scored a goal. The club’s coach mentioned in his interview he was delighted with Giroud’s work.

In March 2018, the athlete celebrated his 30th goal in the friendly match against Columbia and was included in the top seven attacking players in the history of the France national team. Nevertheless, the team lost with the score 2:1. Giroud and the American defender Matt Miazga collided during the event, and Olivier had to leave the field due to head trauma.

In summer 2018, Giroud and the France national team participated in FIFA World Cup in Russia. On July 15, 2018, Luzhniki Stadium held the final match. The Croatia national team found itself there for the first time but lost to France; the score was 2:4.

Today, the sportsman has little free time and spends it with family or participating in charity events. Although Giroud has no official Instagram page, he shares a lot of information on Twitter. One can see the man’s pictures from a teenager’s oncology center or Beardilizer commercials: he had signed a contract with the beard care brand at the end of 2017.