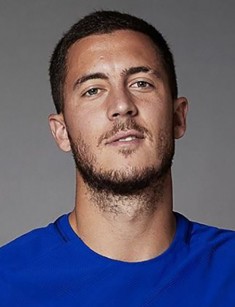 Eden Hazard is a Belgian football player, the midfielder of the English Chelsea F.C. and the national Belgium team. Hazard has become popular due to his creative approach to the game, high speed, and excellent skills. Football commentators have entitled the football player as "fearless, explosive attacking midfielder capable of changing the game course at one pass". Also, the Belgian player got the nickname of "the nightmare of defenders" for his rough and unpredictable style of play.

The sportsman was born in the Belgian province of Hainaut located in the Walloon region. Here French was the primary language of communication. But Eden spent only his early childhood in the town of La Louvière. The football player grew up in another city of Walloon region – it was Braine-le-Comte with the 20-thousand population.

Eden has three brothers - Thorgan, Kylian, and Ethan. They have Belgian roots from their father's side and African roots from their mother’s side. Carine Hazard originated from Morocco. His mother belonged to Muslim confession, and Eden chose the same religion for himself.

It seems that the boys from Hazard family hadn't got another choice but to become football players. Both of their parents dedicated their lives to this kind of sport. Their father Thierry Hazard spent most time of his sports career in Louviers F.C. where he played as a defensive midfielder. He played in the Belgium Second Division, and his wife Carine played as a striker in the Belgian Women's First Division.

Carine had to stop playing when she was three months pregnant with her firstborn Eden. Thierry left the football field in 2009 as his four sons and his wife needed attention and care of the head of the family. Today Eden Hazard's parents are sports coaches.

The family of Hazard was living close to the stadium. By the words of Eden, their house situated in three meters from the field, and it was possible to get her through the hole in the fence. Hardly could the boys walk, they started to kick a ball. It isn't surprising that all Azar boys have become football players. Thorgan played in Lens F.C., Kylian was a member of Lille F.C. What about Ethan, he stayed in Belgium and joined Tubize F.C. where his elder brother Eden began his sports biography.

Eden Hazard made his first steps in football at the age of 4 in Royal Stade Brainois. Eight years later the gifted football player was accepted to Tubize football club. Already then the midfielder Hazard was classified as a halfback - so-called flank midfielder playing closer to the sideline.

The 14-year-old football player from Tubize F.C. was noticed by the scout of the French professional Lille F.C. at the local tournament. The management invited the father of Eden to the meeting at which the parties discussed the youth contract. Carine and Thierry agreed to the transfer of their son as considered the Belgian training system of football players less professional. The close location also played its role.

In such a way, in 2005 Eden Hazard got to the sports school of Premier League. After he had finished it, he continued to study at Lille F.C. Academy. In 2007 the Belgian football player concluded the contract with the French club for three years. A year later Eden Hazard already played for the primary structure of Lille F.C, having debuted in the match against Sochaux team.

The midfielder scored his first goal to the gate of Auxerre, and in November of 2008, he signed the new contract for three years on better terms. Soon, the football commentators and fans of the club entitled Eden Hazard as the most perspective football player in the world. And it was right, the progress of the football player for only a couple of years turned out to be amazing. In Lille F.C. Hazard became the team leader.

In 2012 the most significant English football clubs fought for the midfielder: Chelsea, Arsenal, Manchester United, Spanish Barcelona and Real Madrid wanted to get Eden as their player. The nationality of the midfielder didn't matter for them, but his professionalism was crucial.

In summer of 2012 Eden Hazard defined with the choice of the football clubs which were competing for him. He announced that he would leave to the future leader of UEFA Champions League. The London Chelsea F.C. won the Champions League, and Hazard concluded the long-term contract with the football club. French Lille F.C. received 30 million pounds sterling for the transfer of the player No. 10. In the new team, Eden changed his number for the 17th.

The brilliant halfback debuted in Chelsea at the end of summer of 2012. In August the team took part in the match for The Football Association Community Shield with Manchester City F.C., but they were defeated with the score 3:2. But in the first match at the national championship, Eden Hazard got a penalty which was successfully scored by Frank Lampard. Also, Eden distinguished with the goal pass to Branislav Ivanović.

The midfielder had scored a debut goal with a penalty in the match against Newcastle United F.C. In the first season for the club the Belgian football player became a star of Chelsea F.C. – with the help of Eden Hazard the team won UEFA Europa League. Next year the football player became the top striker of the team, but in Premier League, Chelsea F.C. had no trophies. Eden Hazard was called the best young player of Premier League.

During the season of 2013-2014 Azar was playing under the supervision of José Mourinho: from the first training, the midfielder became the key member of the team. The coach placed his hopes on Eden as on the most perspective player. In 2013 the half back together with the team won the UEFA Europa League. The midfielder was called the player of the year of the team according to the results of the season.

In 2014 there were rumors about Eden Hazard's return to France, but this didn't happen. The midfielder still plays for Chelsea F.C. and the national Belgium team. The football player is 1,73 m high.

The club statistics of the halfback for February 2018 is following - 85 scores for 283 games of Chelsea F.C.

The football player leads activity in social networks and regularly delights his fans with his new photos on Instagram where he has millions of subscribers. But his pictures are somewhat professional - Eden doesn't share facts and events from his private life.

By rumor, Hazard has a happy and united family. His wife is not a model, an actress or a singer, as wives of most of his colleagues. An ordinary girl called Natacha Van Honacker became the spouse of the football star. The football player married a young Belgian beauty when she hardly had graduated from the school. Their relationship was able to stand the test of time: Eden Hazard met his beloved at the age of 14.

His young wife left Belgium and moved to live with Eden in France. In December 2010 Natacha gave birth to their firstborn called Yannis. Two years later the spouses who were living in a civil marriage registered their relations. Today their three sons grow up in their family: Yannis has two younger brothers – Leo and Samy.

Natacha avoids publicity and keeps in the background of her famous husband. The spouses seldom appear at secular events. Natacha Hazard brings up children of the star football player and supports home comfort. It isn't so difficult to succeed in it, as the wealth of the midfielder of Chelsea F.C. reaches $13 million.

Under the conditions of the new contract which the midfielder concluded till 2020 his salary per week increased to the record €340 thousand. For today Eden Hazard is the highest paid football player of Premier League.

During the season of Premier League of 2017-2018, the midfielder played in the majority matches for Chelsea football club. At the end of the season, people began to talk more and more that the football player was going to transfer to Real Madrid. The journalists compared Hazard to Lionel Messi and Cristiano Ronaldo, but Eden refused from these comparisons with the famous forwards. He said that he didn’t reach the level of these football stars. 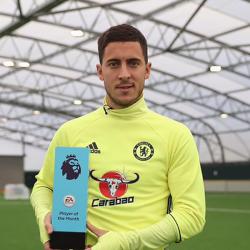