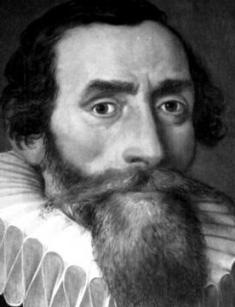 Johannes Kepler is an outstanding astronomer and mathematician whose scientific genius advanced his time. He described three laws of planetary motion and discovered that orbits were elliptical; the scientist foresaw many discoveries.

Johannes Kepler was born on December 27, 1571, on John the Evangelist’s day. The future scientist’s father was a mercenary in the Spanish Netherlands and left the family when the boy was five. He is believed to have died in the Netherlands during The Netherlands War of Independence. The mother, Katharina Guldenmann, was an inn owner and herbalist; she also worked as a fortune-teller. By the moment Johannes was born, there were two sons and a daughter in the family while the financial condition was far from being good.

The boy took got acquainted with astronomy early and fell in love with it immediately. He witnessed the Great Comet of 1577 at the age of six thanks to his mother and admitted a lunar eclipse in 1580.

The young man received a primary education and then entered a theological school, Tübinger Stift. As a student, Kepler proved to be an excellent mathematician and a skilled astrologist: Johannes was extremely fond of the “pseudo-science” and cast horoscopes for his groupmates. At the age of 23, the young man graduated and received the position of a math and astronomy teacher in a protestant school in Graz.

Kepler’s worldview formed on two basic principles: science and theology. Thus, he paid much attention to the understanding of life through the spiritual, never putting it higher than scientific principles, though.

When Johannes was a student, he defended the idea of the heliocentric system in his arguments with coursemates; he examined ‘s model from the astronomical and theological points of view. In 1596, the scientist presented his first significant work, Mysterium Cosmographicum. Although it was not much popular, the book made Johannes more respectable in his colleagues’ eyes.

Further on, Kepler was allowed to study planetary movements. He was going to write four more books about the sun, stars, planets, and their movement; the physical nature of planets and geography; the influence of the heaven on Earth, including the optical perspective; meteorology and astrology.

As Kepler was looking for a companion among his colleagues, he wrote the famous astronomer Tycho Brahe. The Danish scientist engaged a serious dispute, but the correspondence continued. The scientists were discussing astronomical problems in the Copernicus’s framework; it was viewed as compatible with theology. However, Kepler had no opportunity to study many issues: he had no exact data that Brahe had thanks to the high-tech observatory.

By 1599, Johannes realized finally that his research was limited with inaccurate data, and the religious tensions in Graz were threatening to his work. Tycho invited his colleague to Prague in December, and Kepler began his journey on January 1, 1600, hoping that Brahe’s protection would be beneficial for him in science and finances.

The researchers met in February. Kepler was a guest for two months and analyzed Brahe’s observing of Mars. By spring, they agreed to collaborate officially, and Johannes came back home in summer to take his family and move to Prague.

The scientist had to face many political and religious ordeals. On August 2, 1600, Kepler and his family were driven out of Graz because they had refused to convert to Catholicism; they moved to Prague. In 1601, the astronomer worked for Tycho and observed planets; he was also writing the tractate against Reimarus Ursus, Brahe’s old rival.

Tycho Brahe died suddenly in October 1601, and Johannes was named his successor as the emperor’s mathematician. He was obliged to have Brahe’s research on Mars and the Rudolphine Tables finished. The next eleven years were the most fruitful time in Kepler’s career.

In 1603, the researcher remembered the weird visual effects during lunar and solar eclipses and focused on the optical theory. On January 1, 1604, he presented his manuscript Astronomiae Pars Optica to the emperor.

The scientist described the Inverse-square law and even extended his conclusions to the human eye description. Today, neurobiologists believe that Kepler was the first who realized that a picture is projected on a retina in the reversed way. Astronomiae Pars Optica became the fundament of the modern optics, even though there is no light refraction research there.

In October 1604, a bright star (SN 1604) appeared in the sky. Kepler did not believe the rumors at first but then saw it personally. The astronomer began to observe it systematically and wrote the book De Stella Nova two years later, talking about the new objects’ astronomical characteristics.

Kepler’s contributed to the science reached its peak in Astronomia nova where he formulated two laws of planetary movement. Johannes began the analysis with the data that Brahe had collected observing the orbit of Mars. However, the scientist believed the conclusions were not precise enough and realized that its orbit was elliptical, not circular.

Besides, the astronomer created the formula: a planet movement speed was inversely related to its distance from the Sun. However, it took much time to find the evidence. To make the task simpler, Kepler adjusted the proportion geometrically and revealed that each planet was moving in the plane that came through the center of the Sun. At the same time, the radius-vector that connected a planet and the Sun made the same area at regular intervals.

In 1611, Kepler created the manuscript Somnium; it was published after his death. This work dealt with the astronomy described from another planet and encouraged to give up the geocentric system for good. It was the allegoric and sci-fi story about a journey to the Moon. In 1615-1621, the scientist wrote three volumes of Epitome astronomiae Copernicanae and described three laws of the planetary movement.

Apart from astronomy, Kepler was a remarkable mathematician. He explained how to find the volume of rotation bodies; the methods he used were similar to those with integrals. Johannes also studied the symmetry of snowflakes. The research led to the idea that the maximum density of sphere positions was in pyramids. The hypothesis was verified 400 years later.

Physics and mechanics also enjoyed Kepler’s contribution. He was the first to use the term “inertia” and formulated the first law of mechanics, like Galileo Galilei. Another discovery almost took place: Kepler was close to describing the law of gravitation, although his approach was not mathematical. Johannes noticed that similar objects tended to unity; the physicist believed it was caused by magnetism and planets’ rotation.

Kepler assumed that the sea level was rising and falling because of the lunar influence. Isaac Newton came to the same conclusion only a hundred years later.

Johannes married his first wife, Barbara Müller, in 1597. The 25-year-old woman was a widow and had a daughter from the previous marriage. The first two children died in infancy; later, the spouses had three kids.

In 1611, Barbara was infected with Rocky Mountain spotted fever. She recovered, but the disease led to complications: epileptic seizures. Besides, Kepler’s children fell ill with smallpox, and six-year-old Friedrich died. Barbara caught another disease soon and passed away.

On October 30, 1613, the scientist married Susanna Reuttinger. Six children were born in this union; three of them survived. All in all, Johannes’s life Susanna was happier: the wife was a kind and friendly woman who warmly accepted the stepchildren.

Kepler was always anxious about his mother. Neighbors did not like that Katharina was an herbalist and fortune-teller, and her aunt had been burned as a witch.

In 1615, when the woman was accused of sorcery, lawyers helped Kepler; the woman was acquitted on all charges. The son took his mother to Linz, but she moved to Leonberg four years later and got arrested again. Katharina was chained near the city gates but refused to plead guilty under the threat of tortures. Once again, Johannes protected his mother; she was released in 1621. However, her health had been destroyed by imprisonment; she had also reached a senior age and died in April 1622.

In his last years, Kepler was frequently traveling. One day, when he arrived to Regensburg to receive his salary, the scientist died of the cold he had caught on the way. Successors received a little cash, dozens of manuscripts, and 29 000 of florins that the emperor owed to Johannes.

Johannes’s grave did not survive to the present days: the Swiss army destroyed the cemetery where the astronomer had been buried. Only the epitaph created by Kepler himself is known:

The mind belonged to Heaven, the body’s shadow lies here).

Many of Kepler’s portraits endured centuries: artists gladly pictured the popular scientist whose works were valuable from his first publications.