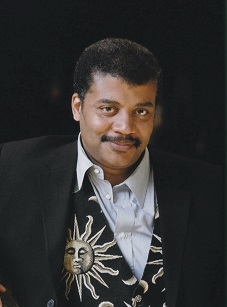 The American astrophysicist with a Ph.D. degree in physics, writer and science communicator is a famous personality with bright thought and numerous fields of interest. DeGrasse appeared on the screen as a host of various documentaries and an actor of TV movies. He became famous science communicator thanks to his unique manner to talk accessibly and clear about complex concepts.

He is the second child in the family, his father was a sociologist, and his mother was gerontologist.

The boy had an interest in science, especially in astronomy, was chief-editor of school scientist magazine. His passion for science made him a quite popular young man who became a lecturer at the age of 15. The scientist mentioned that his love for astronomy appears in his early ages when one day he looked at Moon through binoculars.

He graduated from school and became a student at Harvard University. Besides science, he had plenty of leisure activities such as rowing and tackling. Moreover, he practiced dancing in different styles – jazz, ballet, Latin, and Caribbean Dance. He won the Gold medal in Latin dances in the national contest.

In 1995 he became a writer of the scientific journal and one year later went to work for the planetarium. Additionally, he is a host of the show and the radio podcast. He remains a famous TV science expert and has millions of followers on Twitter.

In the 2000s he became a national advisor of the president in the questions of exploration space.

He has a unique manner of communication with people. The scientist talks in an accessible way about complex concepts, he has splendid oratory skills and sparkling sense of humor. In 2019 Tyson appeared on the YouTube channel "StarTalk" and introduced "ghost-like" aerogel, the porous ultralight material in which the liquid component has been replaced with a gas leaving a low density solid.

Sometimes the scientist surprises people with unlikely collaborations and topics, for example, he became a guest on Joe Rogan's podcast, the mixed martial arts commentator and podcast host.

There is an exciting podcast where Tyson considers the famous movie "Avengers: Endgame" from the scientific point of view.

He firmly believes in the progress of humanity through the pursuit of scientific knowledge and understanding. Neil denies antithetical views like climate change denial and encourages policies that support the development of renewable energy and sustainable transport. Tyson is a supporter of space exploration, particle physics research, astronomical observations and all other forms of scientific endeavor.

Many people consider that he is an atheist, but the scientist stated that he is prone to have agnostic views. Tyson is an author of numerous inspiring quotes, one of them:

As a director of the planetarium, he contributed to the renovation of facilities and helped to find the necessary sum of money. This time he had decided to remove Pluto from the display of planets. He stated that Pluto is a dwarf planet. Many people didn't support this idea.

His vital aim is to break boundaries between scientists and ordinary people. He had done much to improve the scientific literacy of general public as a host of documentary series. Besides he wrote many publications and books, "Astrophysics in a Hurry" became a bestseller, more than a million copies were sold.

Neil is married and is the father of two children. He met his wife in 1988 at the university. Tyson is a famous vine enthusiast whose collection featured in the Wine Spectator. At the end of 2018, the scientist met sexual misconduct allegations. Four women accused him of sexual misconduct.

He denied rape accusation and said that his actions were misinterpreted and apologized for the offense. In 2019 there were lengthy investigations, but Tyson continues his serving for the Hayden Planetarium.

At present, Neil deGrasse Tyson has a net worth of $5 million dollars.

The scientist has full recognition not only in science. Nine universities gave Neil his Ph.D. degrees, in 2005 he got the most prestigious award in the world of American science - Public Welfare Medal. In 2008 the journal "Discover" included him in the list of 50 most important, influential and Promising People in Science, in 2007 "Time" called him one of the most influential people of the year. He appeared on different shows as an expert and stared on the final season of "The Big Bang Theory."

The scientist published various books and research articles, among them: