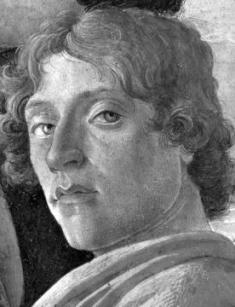 Sandro Botticelli is a remarkable figure in the Florentine painting of the Quattrocento epoch. After his death, the master faded into obscurity until the mid-19th century. Today, both experts and ordinary people remember the artist’s name as long as a conversation about the early Renaissance art is held.

Alessandro di Mariano di Vanni Filipepi was born on March 1, 1445, into the family of the Florentine tanner, Mariano di Vanni d'Amedeo Filipepi. Sandro was the youngest child and had three brothers: Giovanni and Simone devoted their lives to trade, and Antonio worked as a jeweler.

There is no consensus about the painter’s pseudonym. The first theory connects it with his elder brothers’ activities – “Botticelli” means “a keg”. According to the second theory, Giovanni gave his brother this nickname because he was plum. There is also the theory that the new name came from Antonio (“battigello” means “a silversmith”); Sandro used to be a jeweler’s apprentice for two years.

The exact dates when Sandro’s paintings were created are unknown; experts can only analyze the painter’s style and give approximate years. The first canvas known as Botticelli’s independent work is Allegory of Strength (Fortitude) made in 1470 for the Florentine court. Today, it is stored in the Uffizi Gallery.

Various pictures of Madonna became the artist’s debuting work; Virgin and Child with an Angel (c. 1470) is the most famous of them. At this period, Botticelli got his own studio, and the son of his former mentor, Filippino Lippi, became his apprentice.

After 1470, the master’s peculiar traits manifested themselves to the full extent: the bright color array and intense ochre shadows to portray carious skin hues. The painter vividly revealed dramatic plots and made figures expressive, feeling, and moving. The early diptych about Judith’s deed (1470-1472) was a brilliant example of that. Botticelli found inspiration in the Old-Testament story about the woman who beheaded the Assyrian invader, Holofernes.

The first nude body appeared in St. Sebastian. The canvas was presented to citizens on the saint’s day, January 20, 1474; the painting was hung at a pillar of Basilica Papale di Santa Maria Maggiore.

In the mid-1470s, Sandro drew his attention to portraits; Portrait of a Man with a Medal of Cosimo the Elder is one of the most popular works. The identity of the model remains unknown. Some people believe it was a self-portrait while others are convinced it is either the artist’s brother, Antonio, or the Medici family member.

The artist got close to the powerful family and their circles in the 1470s. On January 28, 1475, Giuliano de’ Medici, the brother of the Republic of Florence Lorenzo the Magnificent, participated in a tournament with the banner that Botticelli had decorated. In fall 1478, he made a portrait of Giuliano.

The famous painting Adoration of the Magi illustrates almost the entire Medici family with their escort. Botticelli’s figure may be found in the right corner.

On April 26, 1478, Giuliano was murdered during the unsuccessful plot against the Medici. Lorenzo survived and ordered the fresco above the gates to Palazzo Vecchio. The illustration of the conspirers did not exist for long; when the less successful leader, Piero di Cosimo de’ Medici, was kicked out, the work was destroyed.

By the late 1470s, Sandro became popular outside Toscana. Pope Sixtus IV invited him to lead the wall decoration in the newly-built chapel in Rome, and Botticelli collaborated with many painters. He also created three frescos, including Temptations of Christ and eleven portraits of Popes. 30 years later, Michelangelo frescoed the ceiling of the Sistine Chapel, and it gained much fame all over the world.

As long as the man returned from the Vatican in the first half of the 1480s, he created his most outstanding masterpieces. They were inspired by the ancient culture and humanist philosophy; Sandro communicated with Neoplatonists at that period.

Primavera (1482) is the most mysterious painting by the artist; it has no clear interpretation today. Perhaps, Botticelli created it after Lucretius’s On the Nature of Things, particularly, the extract:

“For the Spring and Venus begin their course, and the winged zephyr, the harbinger of spring, walks before, near whose footsteps maternal Flora, preparing the way, covers the whole path with richest flowers and perfumes”.

Lorenzo di Pierfrancesco de’ Medici, the second cousin of Duke of Florence, owned this painting, as well as two other genius works: Pallas and the Centaur and The Birth of Venus. Fine art experts emphasize these works’ plastic lines, lyricism, rhythm, and harmony through tiny details.

In 1490-1500, the teachings of the Dominican monk Girolamo Savonarola had a significant impact on the painter. Savonarola criticized the church order of the epoch and secular life luxury. Sandro absorbed the ideas of asceticism and redemption and began to use darker, more modest colors.

Landscapes and interior elements disappeared from his paintings, for instance, in Portrait of Dante (c. 1495). Judith Leaving the Tent of Holofernes (1490-1500) and Lamentation over the Dead Christ (1490) became typical.

Lorenzo de’ Medici’s death, Savonarola’s accusations of heresy and his execution, and following political disturbances shocked Sandro and added even more mysticism and darkness to his works. The Mystical Nativity (1500) is the most significant artifact of that time and the last important painting in Botticelli’s life.

There is little information about Botticelli’s personal life. The painter was not married and had no children. Some researchers believe he was in love with Simonetta Vespucci, the first beauty of the city and the ladylove of Giuliano de’ Medici.

She posed for many paintings by Botticelli and died in 1476, at the age of 23.

The last four years and a half brought poverty and no work. The master was buried at the Ognissanti Church, Florence, on May 17, 1510.