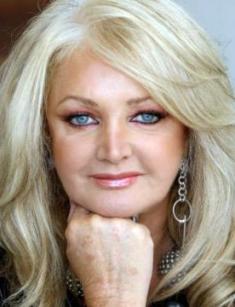 Bonnie Tyler earned her fame in the late 1970s. The owner of the unique voice, she had to go through a vocal cord disease; it could cost her the whole career. However, the slight imperfection turned out to be the musician’s zest; soon, she recorded the ballad that continues to be popular today, 40 years after the release.

Gaynor Hopkins was born in Skewen, a small town in South Wales. The family was large: four sons and four daughters.

The Hopkins regularly attended the Protestant church and respected various music. Little Gaynor showed her artistic talent early; she performed a religious hymn for the first time. However, church singling was more like a boring duty rather than a hobby. She preferred different music and listened to rock’n’roll and blues at home.

After graduation, the young woman worked in a grocery store; other sources claim she sang in a nightclub. At the age of 18, Hopkins participated in a low-level music competition; amateurs from the provincial town were her opponents. Without strong rivals, Gaynor won the second place without great pains and felt inspired to become a singer.

The first thing the young woman did was looking through newspaper advertisements. She found a vacant place of a backup vocalist and succeeded at the auditions, becoming a member of the youth group. The pseudonym “Bonnie Tyler” appeared at this period: Gaynor did not want to be mixed up with the pop singer Mary Hopkins. However, there is another theory of the stage name appearance: it happened in 1975, when Roger Bell noticed the 24-year-old artist. The producer invited her to London and then helped her invent a bright name.

April 1976 brought the debuting single, but it was not a success. Producers decided to launch a campaign before the second single, and it was effective: British critics appreciated “More Than a Lover”. However, Europe did not know the musician until 1977.

In 1977, the artist was diagnosed with a vocal cords disease and needed surgery. Doctors prohibited her from speaking for a month, but the young woman could not stand it and violated the recommendation. Thus, Bonnie’s clear voice gained some husky tone. She was desperate: the defect could destroy her career. Still, the success of “It’s a Heartache” proved the opposite. Gaynor’s dream came true after the single release: she was finally recognized.

In 1978, the singer recorded two albums. Diamond Cut was popular in Sweden and Norway and reached the 145th position in Billboard 200. In 1979, the British vocalist participated in a music festival in Tokyo and won.

Tyler wanted to change something after the fourth disc. She got a new producer, David Aspden, but he failed to satisfy the singer’s expectations. Bonnie was looking for a new style and tried to contact Jim Steinman. Today, the producer is known as the creator of Tyler’s famous songs in the 1980s, but he was almost impossible to reach at that period.

The woman managed to meet him, though. Steinman listened to her old songs, and none of them impressed him. However, the producer felt Tyler’s potential and agreed to work with her. “Total Eclipse Of The Heart” became an international hit in 1983. The rock ballad appeared in the musical Dance of the Vampires and other movies; Russell Mulcahy created the video for the hit. Filming took place in a 19th century building near Virginia Water. Fans were convinced for a long time that the soccer player Gianfranco Zola was shaking hands with the vocalist at the end of the video. In 2012, the athlete debunked the myth and said he had not participated there.

Jim Steinman and Bonnie Tyler created several albums together; their song “Holding Out for a Hero” appeared in the 1984 melodrama Footloose. In 1988, the collaboration finished with the album Hide Your Heart.

In the early 1990s, the British singer worked with Dieter Bohlen: the German producer called her one day and offered to cooperate. The singer did not accept the invitation at once. 1991 brought the album Bitterblue. Critics’ reaction was ambiguous.

Bonnie participated in Eurovision in 2013. Before the new album release, she sent her songs to the BBC and received an offer to represent her country with the third track. Tyler was reluctant at first but then changed her mind: it was a good promotion step. The artist took the 15th place in the competition; the audience appreciated the album. However, music fans still associate the name of the singer with the 1980s rock in the first place.

Gaynor married the sportsman and real estate agent Robert Sullivan in 1972. The singer and businessman’s marriage had nothing to do with scandals and intrigues, which was unusual for celebrities.

The spouses purchased a house in Albufeira in 1988; this is where the future star was working on the first disc in the 1970s. In 2005, Bonnie participated in the Polish show about famous people’s luxurious villas; the vocalist had much to boast. It was only a small part of the couple’s property.

Robert and Gaynor’s happy pictures have been pleasing fans for more than 40 years. The woman met her husband before she became a star.

There is a theory that Tyler would not have earned her fame if it had not been for Sullivan, who sponsored his wife’s career. The woman met the businessman in the early 1970s when she was a backup vocalist. Robert noticed the young singer, helped her find a proper producer, and married her in the end.

Since 1999, the couple has owned agricultural lands in New Zealand and Portugal, as well as 22 houses in London and Berkshire.

The lovers’ life was not all about happiness and joy. The dreams of a child never came true. Bonnie tried to conceive for many years.

In 1990, Gaynor got pregnant but miscarried during the third month. The singer found some comfort in caring about her siblings and their children.

Bonnie Tyler gladly participates in charity events. At the beginning of her career, the artist recorded a single supporting the fight against drug addiction. In the 2000s, she took part in the concert that sponsored oncology research.

In 2015, the celebrity participated in the German TV show Die schönsten Disney Songs aller Zeiten and sang “Circle of Life” from The Lion King. The next year, she organized a tour in Germany and included her most popular hits there.

2017 was marked with the news about the upcoming release of the single “Love’s Holding On” with the guitarist Axel Rudi Pell. The same year, Tyler appeared at an unusual concert on board a cruise in the day of an eclipse and performed her hit from the 1980s.

In March 2019, fans enjoyed the singer’s new disc, Between the Earth and the Stars.