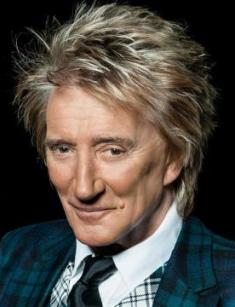 It is hard to imagine but the world of music could be without Rod Stewart. The singer wanted to become a football player as a child and he had all capabilities for that. However, it did not happen. The musician deals with different genres masterfully. There was a place for blues, rock, pop and rhythm-and-blues in his songs. Rod changed a lot of musical groups and became famous as a solo artist. The English magazine Q included the man in the list of one hundred great singers.

Roderick David Stewart was born in the capital of Great Britain, where his family moved from Scotland shortly before his birth. Parents raised four children, young Rod became favorite. The boy studied well at school. He liked history very much. He was fond of models of the railway and started to play the guitar for the first time at the age of 11.

His father and brothers were football fans, the future star also joined this sport and even dreamed of making a career as a player. He was a member of the youth team at Brentford F.C. His parents were sure that he would be a star football player but he became a musician.

The young man worked at the cemetery and mastered the guitar in the evenings. One day he finally realized that music was a business of his life. He quit his job and went to travel around the world together with his friend, the folk singer Wizz Jones. The guys planned to go around Europe but their trip ended in Spain. This country expelled the young men, mistaking them for vagabonds.

Rod Stewart found his first fans in nightclubs, pubs, he played and sang even on the streets. The young man was taken in different groups and he wanted to create his music band. And his desire came true. He built his group "The Ray Davies Quartet" in 1962, it changed its name to "The Kinks."

However, he became famous, when the musician joined the team " The Jeff Beck Group," which was organized by Jeff Beck. The guys traveled around England and gave their fans a couple of platinum records. The debut album "Truth" immediately became a hit. But the band broke up in the late 1960s and Rod began performing with the group "The Faces."

The artist tried to make his solo career, having received an offer from the recording company to release his "personal" record at the same time. The solo album "An Old Raincoat Won't Ever Let You Down" turned out to be unusual, folk, country and rock were mixed in the album.

The breakthrough in the creative biography of Rod Stewart happened with the release of the album "Every Picture Tells a Story." The touching and funny song " Maggie May " was very popular at that time, in which the young man lost his virginity.

The basis of the single was formed of the real facts of the singer's life. The performer pleased his fans with the songs, which became hits. Rod found a sponsor and went on a world tour for the first time. He was even in Australia.

Stewart finally started to make his solo career after the collapse of the group "The Faces." He changed his place of residence, he was in America and then he moved to another country to evade British taxes. The artist was warmly greeted there and he thanked his fans with such songs as - "Sailing," " Tonight’s The Night" and " The Killing of Georgie."

The singer was at the peak of his popularity until the early '80s but then he faced a creative crisis for six years. It was impossible for him to create something fresh and exciting. He managed to return his former love only in 1988. The singles from the record " Out of Order " were in the charts at the radio stations. Rod Stewart began to arrange bright light shows, which appeared in different parts of the world.

Rod was in memorable duets with well-known colleagues. He sang with Tina Turner and there is a composition in the movie The Three Musketeers, which was performed by Bryan Adams and Sting. He was in the TV show, where there was his old friend Ronald Wood on the set.

His performance on the Copacabana Beach became very famous, where there were 3.5 million music lovers. In 1994, his name even appeared in the Rock and Roll Hall of Fame.

In 2002, Rod Stewart pleased his fans with new ideas in his work. The musician presented to the public his album "It Had To Be You," in which he shared his vision of jazz standards of the 1930-1960s. The album was the first of four discs, which formed the series "The Great American Songbook." It was a success.

The artist had only three albums after such hard work, which were released until 2015. His fans especially liked his song "Love Is." In 2016, the singer "gave" vocal parts to Frankie Miller. The English performer included the singles in his album.

Stewart admits that he is happy in family life. In 2007, Rod got married for the third time. His chosen one was the model Penny Lancaster, with whom the star performer lived together for eight years before the wedding. The singer admits in an interview:

"Penny's my angel. She was my inspiration and my protection, my Berlin Wall. If we hadn't met, I wouldn't be the person I am now."

The couple met at a Christmas party. A woman made the first step, she asked him for an autograph. A couple managed to maintain their relations, the model and musician hold hands when they go for a walk.

Rod is a father with many children. He experienced the joy of fatherhood for the first time at the age of 18, the illegitimate daughter Sarah was raised by adoptive parents. When Rod got married the actress Alana Hamilton, they had their daughter Kimberly and son Sean. He had another wife, Rachel Hunter. She gave birth to the girl Renée and the boy Liam. His daughter Ruby recalls him his relationship with the model, Kelly Emberg. He has heirs Alastair and Aiden in the current marriage.

In 2000, the performer had a terrible disease. Doctors diagnosed with thyroid cancer. The operation gave him a chance for life.

You can only envy the physical form of the artist. In 2018, Rod celebrated his 73rd birthday, although he does not think to retire. He had concerts in Canada, visited the Russian capital. He shone at a jazz festival, which was in New Orleans. Rod Stewart has a net worth of $235 million.

Performer`s character remained the same. He is a troublemaker and a bully, who likes to criticize his colleagues. Sting, Madonna, Lady Gaga received criticism from him. In the spring of 2018, he attacked Elton John with criticism.

Sir Elton announced the last tour of his life, deciding to end his career, which lasted for 50 years. The musician was going to say goodbye to fans three years in a row.

Stewart ridiculed the idea of a farewell tour, accusing John of a commercial approach to music. Rod said:

"When artists talk about their farewell retirement tours, they just want to create a stir and sell more tickets."

Also, he noted that the stars usually do not think to leave, then they come back and earn even more money than before. A striking example of this is the group "Scorpions," this group had three farewell tours. However, Elton John did not say anything, ignoring the attack of his colleagues.