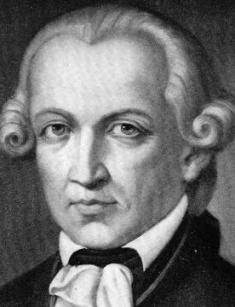 Immanuel Kant was a German thinker, the founder of classical philosophy and the theory of criticism. Kant's immortal quotations have gone down in history, and the scientist's books are the basis of philosophical teaching throughout the world.

Kant was born on April 22, 1724, to a religious family in the suburb of Königsberg in Prussia. His father Johann Georg Kant worked as a craftsman and made saddles, and his mother Anna Regina Reuter ran the household.

The Kant family had 12 children, and Immanuel was born the fourth, many of the children died in infancy from illnesses. Three sisters and two brothers survived.

The house where Kant spent his childhood with a large family was small and poor. In the 18th century, the building was destroyed by fire.

The future philosopher spent his youth on the outskirts of the city among workers and artisans. Historians had long debated to what nationality belonged Kant, some of them believed that the ancestors of the philosopher came from Scotland. Immanuel himself suggested this in a letter to Bishop Lindblom. However, this information had not been officially confirmed. It is known that Kant's great-grandfather was a merchant in the Memel region, and his maternal relatives lived in Nünberg, Germany.

Kant's parents provided their son with spiritual; they were adherents of a particular branch of Lutheranism-pietism. The essence of this teaching is that everyone is under God's eye, so personal piety is preferred. Anna Regina taught her son the basics of faith and instilled in little Kant a love for the world around him.

The devout Anna Regina took her children to sermons and Bible studies. Franz Schultz, a doctor of theology, was a frequent visitor to the Kant family, where he noticed that Immanuel excelled in the study of Scripture and was able to express his thoughts.

When Kant was eight years old, on Schultz's instructions, his parents sent him to one of the leading schools in Königsberg – the Friedrich Gymnasium. They wanted the boy to receive a prestigious education.

Kant studied at school for eight years, from 1732 to 1740. Classes in the gymnasium began at 7 am and ended at 9 pm. The students studied theology, the Old and New Testaments, Latin, German and Greek, geography, etc. Philosophy was taught only in high school, and Kant believed that the subject was taught incorrectly. Classes in mathematics weren't free, and the subject was considered an additional one.

Anna Regina and Johann Georg Kant wanted their son to become a priest in the future. However, the boy was impressed by the Latin lessons taught by Heydenreich, so he wanted to become a literature teacher. Kant did not like the strict rules and morals of the religious school. The future philosopher was in poor health, but he studied diligently due to intelligence and inquisitiveness.

At the age of sixteen, Kant entered the University of Königsberg, where the student was first introduced to the discoveries of Newton's teacher Martin Knutzen, a pietist and Wolffian. Isaac's teachings had a significant impact on the student's worldview. Kant was diligent in his studies, despite the difficulties. The philosopher's favorites were natural and exact sciences: philosophy, physics, mathematics. Kant went to a theology class only once because of his respect for pastor Schulz.

The historians have not found any evidence of the statement that Kant studied in Albertina. Therefore, one can only guess that there, he was a student of the theological faculty.

When Kant was 13 years old, Anna Regina fell ill and soon died. The large family had to make ends meet. Immanuel had nothing to wear, and did not have enough money for food; his wealthy classmates fed him. Sometimes the boy did not even have shoes and had to borrow them from friends. However, the young man looked at all difficulties from a philosophical point of view and used to say that things obeyed him and that it should never be the other way around.

Scholars divide the philosophical work of Immanuel Kant into two periods: pre-critical and critical. The pre-critical period was the formation of Kant's philosophical thought and the slow liberation from the school of Christian Wolff, whose philosophy dominated Germany. The critical time in Kant's work was consideration of metaphysics as a science, as well as the creation of a new doctrine that was based on the theory of the activity of consciousness.

Immanuel wrote his first essay Thoughts on the True Estimation of Living Forces at the University under the influence of teacher Knutzen. The work was published in 1749 thanks to the financial assistance of his uncle, Richter.

Kant failed to graduate due to financial difficulties. Johann Georg Kant died in 1746, and Immanuel had to work as a home teacher to support his family. He taught children from the families of counts, majors, and priests for almost ten years. In his spare time, Immanuel wrote philosophical papers, which became the basis of his works.

In 1755 Immanuel Kant returned to the University of Koenigsberg to defend his thesis Meditations on Fire and obtain a master's degree. In the fall, the philosopher received his Ph. D. for his work in the field of theory of knowledge A New Exposition of the First Principles of Metaphysical Knowledge and began to teach logic and metaphysics at the University.

In the first period of Immanuel Kant's activity, the cosmogonic work Universal Natural History and Theory of the Heavens in which Kant focused on the origin of the Universe attracted the interest of scientists. In his work, Kant relied not on theology, but physics.

Besides, during this period Kant studied the theory of space from the physical point of view and proved the existence of a Higher Mind, from which all the phenomena of life originated. The scientist believed that if there was matter, then there was God. According to the philosopher, humans must recognize the necessity of the existence of someone who stood behind material things. Kant described this idea in his central work The One Possible Basis for a Demonstration of the Existence of God.

A critical period in Kant's work arose when he began teaching logic and metaphysics at the University. Immanuel's hypotheses did not change immediately, but gradually. At first, Immanuel changed his views on space and time.

It was during the period of criticism that Kant wrote outstanding works on epistemology, ethics, and aesthetics: the works of the philosopher became the basis of the outstanding teaching. In 1781 Immanuel expanded his scientific biography by writing one of his significant works, Critique of Pure Reason, in which he detailed the concept of the categorical imperative.

Kant was not handsome; he was short, with narrow shoulders and a hollow chest. However, Immanuel tried to keep himself in order and often visited the tailor and hairdresser.

The philosopher led a reclusive life and never married. In his opinion, love affairs would interfere with scientific activity. For this reason, the scientist never started a family. Kant, however, loved and enjoyed the beauty of women. In his old age, Immanuel was blind in his left eye, so during dinner, he asked some young beauty to sit on his right.

It is unknown whether the scientist was in love: Louise Rebecca Ballath, née Fritz in her old age recalled that Kant was fond of her. Borowski also said that the philosopher was in love twice and intended to marry.

Immanuel was never late and kept his daily routine to the minute. He went to a café every day for a cup of tea. And Kant always came at the same time: the waiters didn't even have to look at their watch. This peculiarity of the philosopher applied even to ordinary walks, which he loved.

The scientist was weak in health but developed his hygiene of the body, so he lived to old age. Every morning of Immanuel began at five in the morning. Without taking off his nightclothes, Kant went to his study, where the philosopher's servant Martin Lampe was preparing his master a cup of green tea and a smoking pipe. According to Martin, Kant had a strange peculiarity: while in the study, the scientist wore a cocked hat directly over the cap. Then he sipped his tea slowly, smoked his tobacco, and read the plan of the lecture. Immanuel spent at least two hours at his desk.

At 7 am, Kant dressed and went down to the lecture hall, where he waited for loyal listeners: sometimes there weren't even enough seats. He read lectures, slowly mixing the philosophical ideas with humor.

Immanuel paid attention to even minor details in the look of his interlocutor; he would not communicate with a student who was sloppily dressed. Kant even forgot what he was telling his listeners when he saw that one of the students was missing a button on his shirt.

After a two-hour lecture, the philosopher would return to his study and change back into his pajamas, cap, and cocked hat. Kant spent 3 hours and 45 minutes at his desk.

Then Immanuel prepared for dinner and told the cook to lay the table: the philosopher hated to eat alone, especially considering that the scientist ate once a day. The table was full of food; the only thing missing at the table was beer. Kant was not fond of this malt liquor and believed that beer, unlike wine, had a bad taste.

Kant dined using his favorite spoon, which he stored with his money. At the table, he discussed the news happening in the world but never philosophy.

The rest of his life, the scientist, lived in a house, being in prosperity. Despite careful health monitoring, the 75-year-old philosopher's body began to weaken: first, his physical strength left him, and then his mind began to blur. In his last years, Kant could not lecture and invited to the dinner table only his close friends.

Kant had to give up his favorite walks and stayed home. The philosopher tried to write an essay The System of Pore Philosophy, but he did not have the strength.

Later, the scientist began to forget the words, and life began to fade faster. The great philosopher died on February 12, 1804. Before his death, Kant said: "Es ist gut" ("It is good").

Immanuel was buried near the Cathedral of Königsberg, and a chapel was built over Kant's grave.