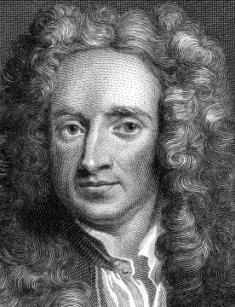 Isaac Newton was born on January 4, 1643, in a small British village, Woolsthorpe-by-Colsterworth, Lincolnshire. The boy’s father died before his son was born. The child was premature and weak; he was not even baptized for a while. However, Newton survived and lived a long life for the 17th century – he died at the age of 84.

The future scientist’s father was a small-scale farmer, yet he was quite wealthy. After the man’s death, the family received several hundred acres of fertile land and forests and a lot of money, £500.

Soon after her husband’s death, Isaac’s mother married again and gave birth to three children. Hannah Ayscough paid more attention to the younger kids, and Isaac was brought up by his grandmother and, later, the uncle Rev William Ayscough.

Newton was fond of painting, poetry, and invented water clocks, windmills, and paper kites. At the same time, he was a sicky and unsociable child who preferred his lone hobbies to cheerful games with peers.

When Isaac went to school, his physical weakness and poor communicative skills led to an unpleasant experience: he was beaten severely. Newton could not stand the humiliation. Of course, he could not become athletic in a snap, so the boy decided to boost his ego in a different way. His academic performance had been low before that, but the student began to excel and surpassed his classmates soon. Newton became best in his class and took even more interest in sciences and wonderful phenomena in nature.

At the age of 16, the mother took her son back home and tried to delegate him some domestic responsibilities; her second husband had passed away by that period. Still, the young man was only creating sophisticated mechanisms, devoured books, and wrote poetry.

Newton was a sizar student: he did not pay for his education but had to do odd jobs at the university or rendered services to wealthier students. The young man bore this test courageously, even though he did not like to feel oppressed and could not make friends.

Famous Cambridge still used Aristotle’s framework in philosophy and natural science at that time, despite the fact that Galileo Galilei’s discoveries, Pierre Gassendi’s atomic theory, and Nicolaus Copernicus’s and Johannes Kepler’s works had been presented to the public. Isaac Newton absorbed every piece of information he could get: mathematics, astronomy, optics, phonetics, and even the theory of music. He often forgot about food and sleep.

In 1664, the scientist began his independent research and created a list of 45 unsolved problems in nature and human life. At that period, he met the talented mathematician Isaac Barrow who had just started working at the college mathematics faculty. Later, Barrow became Isaac’s teacher and one of his few friends.

Thanks to the mentor, Newton got even more interested in mathematics and made the first splendid discovery in this sphere: the binomial expansion for any rational property. The same year, the young man earned his Bachelor degree.

In 1665-1667, when England suffered from plague, the Great Fire of London, and expensive war against Holland, Newton settled in Woolsthorpe for a short while. He focused on optic studies and tried to find out how to relieve refractive telescopes from chromatic aberration. Thus, the scientist came to the phenomenon of dispersion. Isaac’s experiments were aimed at understanding the physical nature of light; some of them are still conducted in academic institutions today.

Following the results of his work, Newton created the corpuscular model of light: according to the physician, it could be viewed as a flow of particles coming out of some source of light and moving straight ahead to the nearest impediment. Although the model itself cannot describe things objectively, it became a fundamental part of the classical physics that made the modern understanding possible.

The most famous discovery – the law of universal gravitation – pertains to the same time. However, the results of the research were published many years later: Newton did not yearn popularity. Many people believe that the scientist formulated the main law of classical mechanics after an apple hit his head. In fact, Isaac was moving toward the truth step by step; his notes prove that. It was the philosopher Voltaire who spread the apple legend.

In the late 1660s, Isaac Newton returned to Cambridge and became the Master; he received his own room and even a group of students to teach. However, teaching was never his cup of tea; the researcher’s lectures were not attended carefully. Besides, the physicist invented a reflecting telescope that made him famous and gave the opportunity to join the Royal Society. This invention made many astronomic discoveries possible.

In 1687, Newton presented his most significant work, Mathematical Principles of Natural Philosophy. Although the researcher had had other publications before, this one became the fundament of rational mechanics and the whole mathematical natural science. The well-known law of universal gravitation and three laws of motion were included there. Newton introduced the key terms; he did not doubt Copernicus’s heliocentric model.

The book was a level higher than other scientists’ studies: no metaphysical ambiguity, no groundless laws, no unclear definitions that Aristotle’s and Descartes’s works were abundant in.

In 1699, when Newton took administration work, his system started to be taught in Cambridge.

Women showed no interest to Newton, and he was never married.

The great scientist died in 1727. The whole London attended his funeral to pay the last respects.