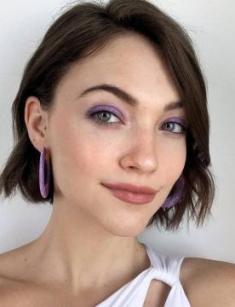 Although the young actress has not an extended filmography, fans of American series know her. Violett Beane started her career with the series The Leftovers and earned her fame as the superheroine Jesse Quick in The Flash. Since 2018, the artist has been busy with several simultaneous projects.

The would-be celebrity was born on May 18, 1996, in St. Petersburg, Florida. She grew up with the elder brother, Jackson McGovern.

When the child turned ten, the parents settled to Austin, Texas; Beane considers it to be her home city today. The family was deeply religious and belonged to a Quaker community; they attended church every Sunday.

As soon as Violett saw her first performance, she fell in love with the theater. The young talent attended drama classes when she was a middle- and high-school student; she decided to become an actress at that period and moved to her goal step by step. Beane found an agent before graduation and went to auditions; her persistence was awarded soon.

In 2015, the young woman received her debuting role in HBO’s series The Leftovers. The audience liked the mystic thriller and won the Critics’ Choice Television Awards for Most Exciting New Series in 2014.

The story is set in the world where 140 million people disappeared, and new religious cults are formed; many families of an imaginary town are involved there. Many weird things happen, and people keep disappearing; people’s panic is growing. Violett personified one of the missing girls, Taylor, and participated in five episodes. She collaborated with prominent Hollywood stars: Justin Theroux, Liv Tyler, and Amy Brenneman.

The series The Flash turned over a new leaf in the artist’s career. She gained the secondary role of Jesse Quick, the daughter of the legendary superhero Johnny Quick and the first Liberty Belle. Jesse can fly and possesses superspeed; she fights as a Teen Titans member thanks to her incredible strength.

The project was incredibly popular and enjoyed many prestigious prizes: People’s Choice Awards, Kids’ Choice Awards, Saturn Awards, and others. In the second season, Beane became a permanent member of the cast but continued to participate in other projects as well. In 2016, one could see her in an episode of the series Chicago P.D. and the comedy Slash; Violett also contributed to the animated documentary Tower about the tragic events in the University of Texas in 1966.

2018 became the most fruitful year for the artist. She appeared in the medical drama The Resident and collaborated with Manish Dayal, who personified the resident internist Devon Pravesh. Beane got the part of his patient, Lily Kendall, fighting against cancer. Her boyfriend left her in the darkest moment, and the whole hospital personnel felt worried about her.

Another role in the fantasy series Legends of Tomorrow followed soon.

The same year, Beane debuted in the new genre, horror. Jeff Wadlow’s thriller Truth or Dare pictures a group of students going to Mexico on vacation. They are having fun when a casual acquaintance invites the company to an abandoned church; they have to play the game where lives are at stake. Violett personified one of the students, Markie Cameron.

In 2013, the actress was dating the musician Paul Grant. Rumors had it she had a romance with her colleague, Keiynan Lonsdale, but no evidence followed.

Nowadays, Violett is dating the musician Eyelid Kid; they confirmed their relationship in 2017 and continue to post cute pictures together on Instagram.

The woman is a person of many interests. She promotes a healthy lifestyle and veganism and even had a naked photoshoot for the PETA organization protecting animals’ rights. Violett is slim and beautiful; she often shares her photos in a swimsuit, too.

Fans are looking forward to the news about Beane’s marriage and children, but she prefers to focus on the career today.

In 2019, Violett participated in the sixth season of The Flash and the new series God Friended Me.

The comedy portrays an avid atheist Miles Finer who has somebody nicknamed “God” among his friends on Facebook. This user offers Miles the pages of people who need his assistance in New York, and the man helps them. The doctor who lost his patient became the first “mission”; further on, it is the journalist Cara Bloom. Cara and Miles try to find out who is behind the account “God”.

Violett Beane’s net worth is estimated at $1 million in 2019.