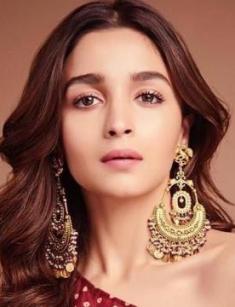 Alia Bhatt is a Bollywood rising star, a young talented actress and singer, the winner of the prestigious Filmfare Award (equivalent to the Oscars), and a charming woman. Alia Bhatt is achieving the movie stardom, and the eminent colleagues can envy the rapid development of her career.

The future Bollywood actress was born in March 1993 in Bombay. Alia spent her childhood and youth in the city on the coast of the Arabian Sea. The girl was destined to become an actress since her first days because she was lucky to be born in a family closely connected with the film industry.

Alia Bhatt and her sister Shaheen, who was five years older, grew up in a house with a creative atmosphere. The father, Mahesh Bhatt, is a director, producer, and screenwriter who is well-known in the Indian film industry. The filmography of the director has fifty movies, and his credentials include the most prestigious National Film Award in India.

Alia and Shaheen’s mother, Soni Razdan, is an actress. Alia also has half-siblings, Rahul and sister Pooja, an actress and model. They are the director’s children born in his first marriage to Lorraine Bright. Having fallen in love with actress Soni Razdan, Mahesh Bhatt converted to Islam, allowing him to marry again, without divorcing the first wife.

The Bhatt family is very famous in the country and has a lot of outstanding representatives in the film industry. Alia’s paternal uncle, Mukesh Bhatt, is a well-known producer. Actor Emraan Hashmi and director Mohit Suri are her cousins. It is not surprising that Alia Bhatt began an acting career in early childhood. At the age of 6, the girl starred in the film Sangharsh, starring Akshay Kumar and Preity Zinta. Alia played the younger version of the title character in the movie.

After graduating from the Jamnabai Narsee School in her native Mumbai, the girl did not think what to do because she was meant to work in the film industry.

In 2012, the film Student of the Year premiered in which the young actress starred with debutant actors Sidharth Malhotra and Varun Dhawan. The director of the project Karan Johar and the actors who played the starring roles became famous overnight. The comedy melodrama about friendship and love became a smash hit, grossing $ 12 million at the box office, which was a very high figure in India.

Two years later, Alia Bhatt's filmography included three projects. In the road movie Highway of the director and scriptwriter, Imtiaz Ali, the actress played a young heroine who had the Stockholm syndrome after being kidnapped. The movie was a box office flop, but film critics praised the film and the actors. Alia got two prestigious movie awards.

Bhatt cooperated with famous colleague Arjun Kapoor in the second movie 2 States, the adaptation of the novel of the same name. It is a modern story about Romeo and Juliet, whose parents oppose their romantic relationship. For the role in the melodrama, the actress had to learn the Tamil language.

The second movie was a great commercial success, grossing $ 16 million at the national box office. Critics unanimously praised Alia Bhatt’s acting, marveling at her brilliant portraying of the heroine and easy manners. The success of the third project, the romantic comedy Humpty Sharma Ki Dulhania, surpassed two previous projects. The leading role of a Punjabi girl named Kavya Pratap Singh, who fell in love with a stranger a week before the wedding, made Alia famous. The film made a lot of money at the box office.

At the end of 2014, they began filming the drama Shandaar, in which Bhatt co-starred with Shahid Kapoor. It was a box office flop. The film about the hero, suffering from insomnia, was released in the autumn of 2015.

In 2016, the girl starred in three Indian films, which also received mixed reviews from viewers and film critics. One of the projects, the thriller Udta Punjab, became a smash hit and earned the actress a prestigious national award for her brilliantly acting.

The following year was marked by working in the romantic comedy Badrinath Ki Dulhania. On the set, Alia met actor Varun Dhawan for the second time. The movie pleased viewers.

In 2018, Bhatt pleased the army of fans with the appearance of the thriller Raazi, in which she played the title character. The blockbuster earned the actress the second Filmfare Award and made her even more popular. Alia’s character, a girl named Sehmat Khan, became a spy when she married a Pakistani officer.

The actress has sung songs in many films, proving her versatile talent. They shot a bright traditional Bollywood music video for the song “Sooha Saaha.”

Alia is an active Instagram user. She has millions of subscribers who carefully follow and comment on events in the personal life and career of the star. The actress is not married yet; she says in interviews that she only plans to have a husband and children. Now Bhatt has a tight work schedule which is planned far in advance, and directors regularly offer roles in new projects. Alia does not want to refuse them when her career is developing rapidly.

The girl has a slim figure. Sources provide different information regarding her height, but judging by the photos and videos, Alia Bhatt is not higher than 5.24 ft. (160 cm), weighing 119.05 lbs. (54 kg). The actress admits that she knows the problem of excess weight, but she managed to achieve the desired measurements with the help of yoga and cardio workouts. The Bollywood star has not eaten meat since 2015, although she does not refuse fish.

On Instagram, people can find photos of Alia without makeup, but she is no less attractive than after visiting an experienced makeup artist.

Bhatt can drive a car, and there are Audi Q5 and Audi A6 in her garage. She likes sleeping well. The girl can sleep for 12 hours, which is necessary after a grueling filming process. Alia keeps a diary in which she writes down the important events of everyday life. Such a report helps her analyze her actions and prevent mistakes in the future.

The beautiful lady has been credited with a dozen love affairs with famous actors, businessmen, and politicians in India. The reporters have claimed that her boyfriends were Ramesh Dubey, Varun Dhawan, Sidharth Malhotra. In 2017, Alia Bhatt began a relationship with a Bollywood heartthrob, Ranbir Kapoor.

In 2018, the couple announced an engagement, but at the beginning of next year, the further relationship of Bhatt and Kapoor was in jeopardy. Rumors have it that Ranbir and his mother want Alia to quit her career in the film industry and become an exemplary housewife, which does not seem to be in the cards of the actress, who has a bright future. It is unknown whether the wedding of the two stars will take place.

In 2019, viewers saw the actress in the films Gully Boy and Kalank. The last one is Abhishek Varman’s romantic melodrama, starring the Bollywood stars Madhuri Dixit, Sonakshi Sinha, Alia Bhatt, and Varun Dhawan.

The premiere of the fantasy melodrama Brahmastra was announced at the end of the year. Alia starred with Amitabh Bachchan and Ranbir Kapoor in this project.

Alia Bhatt has a net worth of $10 million.