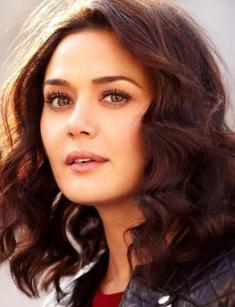 Preity Zinta is one of the leading Indian actresses who completed her career in 2016. In addition to filming, the woman has written a series of columns for BBC News Online South Asia. Moreover, Preity is a public figure and TV presenter. She founded the production company PZNZ Media and became the co-owner of the cricket team Kings XI Punjab.

The famous Indian actress, Preity Zinta, was born in the town of Rohru on January 31, 1975. The girl’s father was a military officer, and her mother was a housewife. At the age of 13, her father died in a car accident, and it also involved the mother who remained bedridden for two years. These circumstances made Preity grow up early.

Studying at a Roman Catholic school instilled in the girl love for Shakespeare's literature and work. There, Preity played basketball actively. At the age of 18, she entered college to study English and graduated from it with honors. Additionally, the girl studied criminal psychology. However, upon graduation, the beautiful and showy girl did not work in her degree field.

Zinta was more interested in a modeling career; she quickly became one of the most popular actresses in commercials. But Preity also had other dreams that soon came true, and a coincidence helped her.

In 1997, the model accompanied a friend to auditions, where the girl was noticed by the famous director, Shekhar Kapur.

He told his colleague, director Mani Ratnam, about the beautiful girl and advised him to invite Preity to the casting for the new film. The same year, Zinta made her debut in Bollywood, starring in the movie Dil Se.

It is a story about a young man, Amar Varma, who works as a radio journalist and goes to obtain an interview with the leader of the separatist group. But in Assam, he falls in love with a stranger, Meghna. The girl avoids Amar because she performs the task of the separatists. As a result, Amar makes a proposal to Meghna, but she refuses to marry him. The young man is in despair; he returns home and is going to marry charming Preeti, whom his parents have found for him. While preparing for the celebration, Meghna comes to the house of Amar, and events take an unexpected turn.

Zinta played the role of the protagonist’s bride. Shah Rukh Khan and Manisha Koirala played the leading roles of Amar and Meghna.

Then the actress began to appear in movies regularly. In 1998, she already got the title role in the action movie Soldier.

The famous Indian actor, Shah Rukh Khan, helped the aspiring actress to work on this movie. Preity thanked the Bollywood star for his patience and help on the set. She mentioned that the man shared his acting experience and was lenient towards the mistakes of the beginning actress.

The same year, Zinta played the leading role in the drama Premante Idera. Venkatesh, Sivaji Raja, Ranganath, and others became her partners on the set.

In 1999, Preity became famous thanks to the leading role in the thriller Sangharsh. The next film was released in 2000. The drama Kya Kehna was very successful. This film earned Preity the first Filmfare Award for Best Female Debut. And next year, critics praised Preity’s acting in the movie Dil Chahta Hai.

The role of a prostitute in the movie Chori Chori Chupke Chupke earned Preity the second Filmfare Award, this time for Best Supporting Actress. Critics appreciated her brilliant acting and the ability to portray various characters.

The family drama Dil Hai Tumhaara (2002) was not commercially successful but was warmly received by critics.

The actress appeared as a girl, Shalu, who grew up with her older sister in an atmosphere of love and understanding. At the same time, the beautiful lady feels that she is estranged from her mother. It becomes apparent when the sisters fall in love with the same guy. The mother takes the side of her sister and asks Shalu to retreat.

In 2003, Preety landed the leading female roles in three top-grossing Indian movies: the patriotic drama The Hero: Love Story of a Spy, the fantasy film Koi... Mil Gaya, and the melodrama Kal Ho Naa Ho. The role in the last movie earned Preity the Filmfare Award for Best Actress, which has become the only one in the celebrity’s credentials so far.

2004 was marked by the release of the war drama Lakshya and the romantic saga Veer-Zaara, which won a lot of Indian movie awards and became a box office hit. However, the 2005 movie Khullam Khulla Pyaar Karen was almost a failure. The same year, Zinta became even more famous, starring in Salaam Namaste, which was India's biggest hit in the overseas market that year.

The 2007 romantic comedy Jaan-E-Mann was also successful. But the comedy Jhoom Barabar Jhoom became a box-office flop and critical failure. However, this fiasco led Preity to the Indian Parallel Cinema. The English debut film The Last Lear was warmly welcomed both in India and abroad.

2008 was marked by roles in the road movie Heroes and the mystical drama Heaven on Earth. This work earned the actress the Silver Hugo Award at the Chicago International Film Festival. Then she had a two-year career break, after which Zinta founded her own production company. However, the debut project, the romantic comedy Ishkq in Paris (2013), was a failure and received negative reviews from critics.

In 2014, the comedy melodrama Happy Ending was released.

It is a story about a bachelor, Yudi. The words "I love you" are the scariest phrase for the young man in the world. However, at the same time, the guy has a girlfriend, Vishakha, who does not intend to let her beloved man go and wants to marry him. To get rid of the annoying girl, Yudi takes the first job he got. So, he must write a script. But in this field, the young man encounters a charming rival, Aanchal, dishonestly stealing Yudi’s contracts. Then Judi, by all means, seeks to make friends with the girl to call the bluff of the swindler.

The famous actress, model, producer, television presenter, and singer is one of the 20 best Indian actresses. The songs and music videos from Preity Zinta’s movies are popular with Internet users.

The actress hosted the TV celebrity-based chat show Up Close & Personal with PZ, which featured a lot of Indian celebrities, including Hrithik Roshan, Shah Rukh Khan, and others.

Attractive Preity Zinta has never been modest. The actress has been credited with many love affairs, Preity's relationship with the famous director, Shekhar Kapur, even gave rise to a scandal.

Zinta's relations with the captain of the cricket team, Yuvraj Singh, attracted the public attention. They started the relationship when Preity became a co-owner of the club. The actress appointed the chosen man captain of the team and announced their love affair. The paparazzi took a photo in which she hugged the athlete. He even bought a luxurious mansion near the sponsor's country house, but they soon separated.

For five years, she had a relationship with Ness Wadia, a successful businessman. It is believed that at the same time, she began to destroy Shekhar Kapur's family, although the actress called these accusations the foolish speculations of the director’s wife. Zinta even filed a complaint with the police against Wadia accusing him of harassment and threats in a public place.

An audio recording released by the media caused another scandal. According to it, Salman Khan claimed to have slept with Preity during the filming of Chori Chori Chupke Chupke. At the same time, the actor did not comment on it. He did not confirm the reliability of this information, but he did not refute the rumors either.

In 2016, Gene Goodenough, an American financial advisor, became the woman's husband. The wedding took place in a suburb of Los Angeles. Their relatives and close friends attended the wedding. After that, the actress quitted an acting career.

Preity Zinta played roles, speaking a wide variety of languages: Hindi, Punjabi, Telugu, and English. In 2003, the young actress testified against the Indian mafia. Unlike her colleagues, Preity did not hide the fact that she was threatened during the shooting of movies. After that, journalists called the woman "The only man in Bollywood."

Preity has donated blood for many years. The actress also participated in AIDS awareness drives and campaigns to clean up Mumbai. In 2010, the celebrity became the face of The Loomba Trust, which supported widows and their children.

In 2004, the life of the star was at stake twice. At first, the woman nearly died in a blast in Colombo, Sri Lanka. It happened during the concert. And then, Preity was in danger during the tsunami and earthquake in the Indian Ocean.

The recent photographs prove that Zinta has gotten lip implants. Experts are sure that this is an unsuccessful experiment on her appearance.

In March 2017, it was rumored that Preity was pregnant. Then the Indian tabloids reported that the slim celebrity (her height is 5.34 ft. (163 cm), and the weight is 123.45 lbs. (56 kg)) had a pregnant belly. They supposedly saw he woman with her husband at dinner, when Zinta made a toast twice, raising a glass of water instead of a glass of wine.

Later it turned out that it was another false report. In 2018, the actress and her husband had no children.