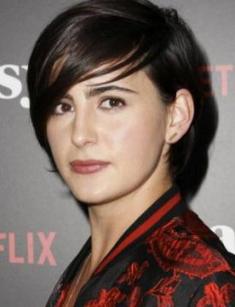 One day, the American producer Jim Kouf came to beginning actors’ classes and asked them to read a piece of a script; it was the role of Trubel. One woman astonished the movie maker by her acting; he persuaded the NBC administration to give her the main part. Thus, the new star of born: Jacqueline Toboni.

Jacqueline Toboni was born on February 18, 1992, in San Francisco, California. The fidgety girl was the youngest among five children in the family. The Italian father and the Irish mother provided them with a good education.

The eldest brother, Michael, became a doctor, and the second one, Joey, works as a contractor. The third brother plays for the popular baseball team Red Sox. Jacqueline’s sister, Gianna, is a reporter and producer of VICE news on the Canadian broadcasting company HBO; she became one of Forbes’s most influential people under 30 in the 2010s.

Speaking of her childhood, Jacqueline confesses she was a tomboy and gave a lot of trouble to her parents. She played tricks with her friends: ringing to neighbors’ doors and leaving smoke pellets at the doorway. Although it is the past history, the memories helped the actress get into her character, Trubel.

The would-be celebrity took her first steps in acting when she was a school student; she performed in the Young Conservatory at the American Conservatory Theatre. In 2010, Jacqueline graduated from St. Ignatius College Preparatory and entered the University of Michigan, School of Music, Theatre & Dance; this is where Jim Kouf noticed the young talent. Toboni finished her studies in 2014 as a Bachelor of Arts. As a student, Jacqueline played on the stages of Movement Theatre Studio (New York), the Williamstown Theatre Festival, and Royal Academy of Dramatic Art (London).

The first success came to Toboni in 2014, when Jim Kouf offered her to play Trubel in the series Grimm; Claire Coffee also starred in this project. As soon as it happened, the actress’s mother was surprised to find the book by Brothers Grimm near her daughter’s bed; it had been stored there for a long time.

Toboni’s look was perfect for the orphan Trubel. Tall (5.74 feet or 175 cm.) and dark-haired, she portrayed the shut-in who could see things other people did not understand. The actress spent three seasons in the series (2014-2017) and performed all the tricks herself – she had received a diploma in stage fighting in her youth.

2015 brought the minor part in the series Major Crimes; the comedy drama Easy followed the next year. In 2017, the woman was invited to an episode of Hell’s Kitchen that spread the information and raised awareness about cancer.

At the same time, Jacqueline works in movies. In 2014, she participated in the short movie Bad Girls; in 2017, one could enjoy her acting in Liked. The Last Room and The Bygone starring Toboni are in post-production now.

The artist keeps her private life secret from anyone; it is unknown who her boyfriend is or whom she used to date. Toboni is focused on career. There have been no pictures on Instagram that could give some romantic hints to the audience. However, one can find many photos with friends or in a swimsuit there.

In summer 2019, Jacqueline joined the cast of the TV drama The L Word: Generation Q; some photos of the actress and other artists appeared on the Internet. The premiere is scheduled for December 2019. Toboni will personify a charming young woman who cannot find the harmony between her religious beliefs and sexual identity.