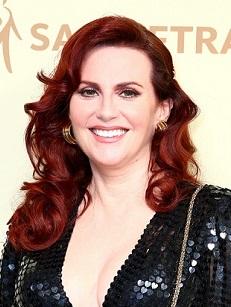 For her long and prolific career, the talented actress appeared on various sitcoms, movies, and Broadway musicals. She has a multitalented nature and proved to be a gifted comic actress. Megan has remained a demanded actress and has got an inexhaustible inspiration which she realizes in music and acting.

The actress is the only child in the family, born in California. Her mother had got a modeling career, and her father was the actor and worked as a contract player. When she was a child, Megan was interested in the arts and attended ballet school.

She continued her education in Illinois. In the university, she studied English literature. Megan had a passion for acting and appeared on several university musicals. She was a highly demanded and had eight shows per week. The appreciation and positive reviews inspired the young lady. She decided to leave the university and move to Los Angeles to pursue the career of the actress.

She dropped out of the university and moved to Los Angeles, but the beginning actress didn’t get particular success. For the first time, she appeared in commercials. Finally the actress got the leading role in the TV series, but after thirteen episodes she lost the job due to canceling the show.

During thirteen years she had been worked as a supporting actress. She appeared on TV shows and worked as a guest actress in various sitcoms and got minor roles in movies. Before the 90s, the actress hadn’t any parts, and she hadn’t money to pay for her rent.

The situation changed in 1998 when she got the successful role of Karen Walker in the popular sitcom. This work was highly appreciated, got critical reviews, and brought the actress several prestigious awards.

By 2000s, the actress got enough recognition and popularity and proved to be a bright host. In 2006-2007 she had her show, but it was canceled due to low ratings. Later she co-hosted on the “Late Show with David Letterman”. She appeared in numerous commercials.

The actress gained a significant role in 2008 when she played in the satirical comedy “Children’s Hospital.” The movie “Why Him?” brought the most prominent commercial success.

Recent years she continued guest-starring on sitcoms and TV series. Since 1994 the actress appeared on Broadway musicals. Besides, she appeared in numerous movies, one of the most successful and bright roles were in the “Everything Put Together” and “Why Him?”. She is bandmember of the musical group “Supreme Music Program.” She also formed a duo with Stephanie Hunt and released their debut album.

The actress has got a long and bright acting career, numerous roles in sitcom and movies, which helped her to gather a good fortune. Thus her salary per one episode of “Will&Grace” was $80, 000. As a result, her net worth is about $15 million.

In 2012 she married Nick Offerman. The couple hasn’t got children, in one interview, Nick confessed that having no kids helped them to save the relationship. He said that they tried for kids in the past, and now they hadn’t planned to have children.

The actress considers herself as bisexual. She confessed that she had never had a full experience of being with the other woman, but she would like to do it. She also was married to Michael Katcher. The actress is active on Instagram, where she posts photos of her life.

Mullally has got 30 nominations, besides the actress is the winner of the following awards: