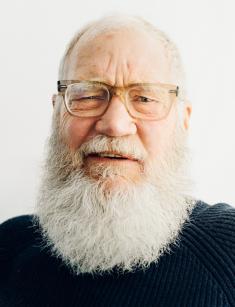 The legendary TV host was never afraid of experimenting and trying something new on television. His style was highly recognized, but the comedian was far from being for everybody. It seems that for his long-lasting career, he got through the dogs and the quicksand and always stayed true to himself.

As a child, Dave admired people with a sense of humor and entertaining skills. First of all, he watched how his father could make every party lovely; he also tried his hand at making jokes during his education years.

After graduating the university, David made his first steps on TV and radio. In 1969 he worked on radio and as a weatherman on TV. Dave chose a wisecracking style and separated from others, thanks to his unpredictable manner. Thus he once congratulated a tropical storm for being upgraded to a hurricane.

Besides at the beginning of his career, he worked on local kiddie show, hosted late and morning shows and took interviews. That time he had a dream of becoming a comedy writer and, as a result, moved to Los Angeles. David began performing as a stand-up comedian at the Comedy Store. He was spotted by Jimmie Walker who hired David to write jokes for stand-up. Thanks to this job a young comedian got acquaintance with such bright stand-up comedians like Jay Leno, Louie Anderson, and others.

Here he met Robin Williams two comedians had become close friends since that time. Later, David told very kind words about Robin Williams in his show. He recalled that William's performance was so wild, like a hurricane. The talented actor visited Letterman's show 50 times, and tv host said that people always were drawn to Robin thanks to his electricity. https://youtu.be/fpxSnw4NbVs The two friends worked together on the film "Mork and Mindy."

His career on this channel began in 1980 when the American comedian became a host of his morning show. This work brought him mixed feelings. On the one hand, it was appreciated by critics and got two Emmy Awards, on the other hand, the show had disappointing ratings which led to canceling the show.

Two years later David tried his hand at a late night show which was quite successful. His first quest was Bill Murray, who became one the most recurrent quests of Letterman's shows. David continued to keep his unpredictable and acerbic manner.

In 1992 he became a host of a show on CBS, contrary to expectations of many people. That year Johnny Carson retired, and many people believed that a young comic would become a new host of the Tonight Show. But NBC gave this job to Jay Leno.

All his life Carson and David stayed good friends. It was revealed that he even wrote jokes for David's monologues. In a tribute to his friend and the prominent TV host, the comedian used all opening monologue jokes of the prominent TV host during the first show following after Carson's death.

As a result, Letterman departed NBC. Job change was for the better for the comedian. The debut of his new show was tapped at Ed Sullivan Theater in 1993. The channel spent $8 million for renovation and signed the three-year contract with Letterman, according to which salary was doubled.

But the new show had its specific nature, and Letterman had to change his style. The biographer of Letterman said that time, "he was fascinatingly disgruntled eccentric trapped inside a more traditional talk show."

There were some competitive moments between The Tonight Show of Leno and The Late Show. First years Letterman's show gained higher ratings, but later The Late Show lost near half its audience.

In 1995 he became a host of the Oscar ceremony. Critics and publicity noted his hosting as a poor, undermining glamor and importance of this ceremony.

In 2000 he had to go under the knife for surgery after revealing that an artery of his heart was severely obstructed. While Letterman was recovering, the show was introduced by his friends.

He returned to the show after a half year recovery, the host cracked jokes about his bypass and continued to invite guest hosts. In 2002 his contract with the channel neared the end, and Letterman's life got a new turn.

ABC offered him a time slot for a new program with Ted Koppel, and David was interested in this proposal. He would be glad to get rid of rating issues and stop the compete with Leno's show. At the same time, he was reluctant to replace Koppel. As a result, Letterman stated that he would be content at CBS.

In 2006 CBS announced about signing a new contract with the popular TV host. CBS corporation displays respect and recognition of Letterman's work. At the same time, David was satisfied too, stating that a man of his age didn't want to learn a new commute. His salary was estimated at $32 million per year.

In 2015 the host announced about his retirement. His last episode was in May. The final show earned the highest ratings. Bill Murray became his last guest on the show.

Among famous Letterman's incidents in recent years are Drew Barrymore's table dance, interview with ditzy Farrah Fawcett and his appearance on "Man on the Moon." Best funny moments of his show you can see into compilation:

One of the classic bits on Late Night was throwing stuff off building. Dave's destructive power was always good for a laugh. He dropped a frozen turkey strapped to a parachute and a roof-clearing hail storm of objects, boombox, assorted melons, and a slinky.

His unpredictable style of hosting is brightly expressed through the following incident. He walks off show during his interview with Joan Rivers. Recently the queen of comedy told the CNN reporter to shut up and stormed off set. That's why David asked her about her walk out and did the same. Joan Rivers finished the show by interviewing herself.

Dave has a unique and hilarious segment, such as Top 10 lists and the Quiz Machine. For his television and producer's career, he gathered a considerable fortune whose net worth is about $400 million. In January 2018, David Letterman became a host of My Next Guest Needs No Introduction with David Letterman on Netflix. During the hour-long episodes, David conducted a long-form conversation with a single guest. There were two seasons of the show where Letterman interviewed Barack Obama, Howard Stern, Kanye West, Melinda Gates, Ellen DeGeneres, and others. Besides, tv host has his prolific production company.

Every new talk show has been influenced by Letterman's unique, irreverent, off-the-wall style. He has made a significant influence on the new generation of comics and TV hosts: Jimmy Fallon, Larry Wilmore, Ray Romano, Jimmy Kimmel, and others.

The TV host draws his inspiration from TV works of Johnny Carson, Steve Allen, Garry Moore, and others.

In 2015, Jimmy Fallon paid tribute to Letterman and his show. Meanwhile Letterman threw some shade on Jimmy Fallon, though they never had any public beef with them. Thus, Letterman said that one of the reasons for his retirement concerned Jimmy. David said that he had a problem to compete with Fallon, especially with his ability to create viral videos. He also spoke about Jimmy Fallon after his interview with Donald Trump. Letterman considered that Fallon should have tougher questions for Trump.

The TV host was married twice, first time David married his college sweetheart in 1968, the couple split in 1977. Then he had a relationship with writer and producer of Late Night. In 1986 the TV host started dating with Regina Lasko. They married in 2009 and resided in North Salem on a 108 acres estate. Letterman has one son. He and his family keep a low social profile.

Letterman is a car enthusiast and had an extensive collection: ten Ferraris, eight Porsches, two Honda motorcycles, four Austin Healeys are among it. The TV host has a warm relationship with band Foo Fighters.