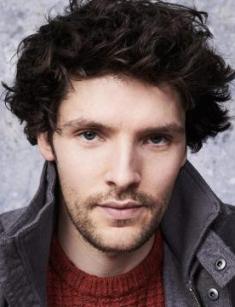 Colin Morgan is a Northern Irish actor who became the star of the fairy-tale series Merlin and the science fiction project Humans. The winner of the Breakthrough of the Year Award and the prizes for best dramatic actor earned the love of the audience, following his passion for exploring and conveying the essence of complex and contradictory characters.

Colin Morgan was born in the Northern Irish city of Armagh on January 1, 1986, and was the second child of the decorator Bernard Morgan and his wife, Bernadette. Following family traditions, parents raised children in the Roman Catholic faith and forced them to attend a parish school, located near the house.

The boy was not afraid of the stage and at the age of five debuted in the choir in amateur productions of Cinderella and Peter Pan. One of the teachers saw Colin's talent and advised him to become an actor.

Having become a student at the United College of Dungannon in 1997, Morgan was continually acting in school plays, one of his especially memorable roles were the ones in the Surgical Sensations at St. Senapods and Bad Day at Black Frog Creek productions. In high school, the young man participated in the national selection for Eurovision, held on a show called You're a Star RTE One, but did not reach the final.

Colin failed and took acting classes, and then enrolled at Belfast Institute of Further and Higher Education. Having received a diploma of higher education, Morgan continued his studies at the Royal Academy in Glasgow. In his last year, Morgan attracted the attention of the English Director Rufus Norris, who invited the talented student to the central role in the play Vernon God Little.

Soon Colin made his debut on the stage of professional theater in the West End and received praising reviews from critics. This influenced the final academic scores and led to him receiving an Award of Distinction for his contribution to the Arts, established by the Belfast Metropolitan College.

After a promising debut, Morgan remained in London and continued his stage career. The next performance of the young talent was the adaptation of Pedro Almodóvar's Todo Sobre mi Madre (All About My Mother). He was nominated for the 2007 London Newcomer of the Year in the Whatsonstage.com Theatregoers' Choice Awards

In 2008, Colin played the role of Jimmy in Thomas Babe's A Prayer for My Daughter. According to journalists, he revived the character's image by showing a mixture of a drug addict and an angel. Soon after, the young actor joined the Royal Court Theater troupe and spent a season playing diverse characters in the works of contemporary authors.

Around this time, Morgan appeared on television, in the Christmas special of the Comedy The Catherine Tate's Show and an episode of Doctor Who, and then received a significant role in the fantastic project, Merlin.

From that moment, Colin's biography changed dramatically: constant participation in filming took a lot of time and did not allow working in the theater. However, the actor liked the new image, and he gladly got into the character of a wizard in the service of the future King Arthur (Bradley James) and opposed the evil charms of Morgana, played by Cathy McGrath.

Since the premiere of Merlin on September 20, 2008, on BBC One, Morgan has won several acting awards, including the National Television Award for Best Actor in a Dramatic Role and the Caron Keating Outstanding Newcomer Award for best debut.

In 2010, Colin came to the big cinema, playing the main characters in the movies Parked and Island. Then he returned to the theater to brilliantly play the role of the air spirit of Ariel in Shakespeare's The Tempest. The play was staged at the famous Globe in 2013, and then shown in cinemas and released on DVD. Morgan was named one of the best actors to fill the character's image with "ethereal silence" and "acrobatic precision."

After enjoying live performances, in 2014 Colin reappeared on television, playing an ambitious journalist in an episode of the Irish crime drama Quirk, based on the books of John Banville.

At the end of filming, the actor was invited to the role of Detective Sergeant in the second season of the series The Fall. To prepare for work, Morgan repeatedly met and discussed the script with the main character of the show Gillian Anderson and writer Allan Cubitt, as well as studied police files and watched the actions of the servants of the law.

After that, the actor starred as the mysterious fugitive Leo in the science fiction project Humans and appeared in the movie Legend by American director Brian Helgeland. Morgan's other project was the short film The Laughing King, released in support of a charity campaign against male suicide.

In April 2016, the motion picture The Huntsman: Winter's War was added to Colin's biography. In an interview with journalists, the actor admitted that he liked to work with director Cedric Nicolas-Troyan and participate in such large-scale epic filming.

In the summer of that year, Morgan got the leading role in the fantastic mini-series The Living and the Dead. This time the actor appeared in the image of Nathan Appleby, a psychologist who tried to start a new life with his young wife Charlotte in an isolated corner of Victorian England and found himself amid supernatural events. Speaking of the project, Colin noted that it was

Colin Morgan became one of those people who were lucky enough to find a girlfriend who supports his creative endeavors and inspires Morgan to take on new projects. This girl was the actress Katie McGrath, who performed one of the leading roles in the Merlin series. Young people met on the set, and at first, their relationship was purely professional. For a year, Colin and Katie looked at each other and then began to grow closer.

This affair put an end to rumors about Morgan being gay, which appeared after the actor had been continuously seen in the company of another star of the Merlin show, Bradley James. Commenting on journalists' speculations, Colin's girlfriend said that the two guys were good friends and that there was nothing intimate going on between them.

The actor himself does not talk about his personal life, so the details of his relationship with Katie remains a secret. The colleagues admit that they have a lot of work and no time for love, so the movie, where McGrath and Morgan appeared together in the image of the characters from the 20s, does not mean that soon fans can expect news of the proposal.

Social media doesn't help us understand what's going on with Morgan's love life, either. The actor does not have an Instagram account, and only professional photos are posted on his fan account on Twitter.

Colin became a vegetarian after becoming lactose intolerant as a child. Yoga classes and a healthy lifestyle allow the actor to look great and maintain a weight not exceeding 165 pounds with a height of 6 feet at the age of 30.

Colin Morgan has a net worth of $4 million. Now Morgan continues to appear in the television series Humans and is preparing for the premiere of the next season. Besides, he will be involved in the production of All My Sons based on the play by American playwright Arthur Miller.

In January 2019, Morgan was the focus of the Irish press, which caught the actor on camera when he was buying wedding rings. Colin's agents declined to comment on the situation, and fans thought their favorite actor had decided to propose to Katie McGrath.