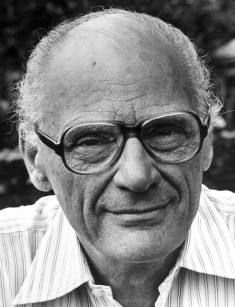 Arthur Miller is a prose writer and a playwright, who became famous around the globe thanks to the play Death of a Salesman. The track record of this talented person has so many awards that they were not for sure stored on one shelf. For example, he became the owner of the Imperial Prize, Tony, Emmy, Laurence Olivier and other prestigious awards. Arthur also wrote scripts for cinema, and his books were screened several times.

The future writer was born on October 17, 1915, in the northern part of New York's Manhattan-Harlem district, which is known as the district of African-Americans. Arthur Miller grew up and was brought up in a family of Polish-Jewish immigrants who arrived in the United States to find a good place for living. Father Isidore Miller was the owner of a factory for the production of fashionable women's clothes and had about four hundred employees at his company.

Arthur's father made a fortune and was known as a respected man in the society. The Miller family did not need money. According to rumors, Isidore had a bungalow at his disposal on the peninsula of Long Island, and the man also employed a chauffeur.

There is little information about Miller's wife and Arthur’s mother August, but it can be assumed that she was engaged in housekeeping and brought up children.

Unfortunately, the luxury of the Miller family did not last long. Isidore instantly turned from a rich man into a man who could hardly make ends meet. The thing is that during the economic crisis that is known in history as Wall Street Crash Miller Sr. invested most of his savings in shares that fell. Therefore, the family gave up a lavish lifestyle and moved to Brooklyn.

Thus, Arthur Miller learned how to work hard from his own experience. As a teenager, Miller delivered bread every morning to help his parents with money. But the misery did not prevent Arthur from graduation from the general education school.

After graduation, the young man continued to study and entered the University of Michigan. Arthur graduated in 1938, shortly before the outbreak of World War II. The young man began working in the docks of Brooklyn, but he dreamed of literary fame.

Arthur began his creative biography in his student years. Miller composed non-trivial works between studies. The debut was the play No Villain (1936), which was revised by the writer several times and, therefore, he changed its name.

When Adolf Hitler’s military operations began, Arthur Miller employed as a correspondent. He collected materials at a shipyard in Brooklyn, and also visited military posts. At that time the genius of literature also sent his manuscripts to the radio and collaborated with theaters. His early works are the plays The Great Disobedience (1938) and Listen My Children (1939).

Miller not only managed to write a number of articles, but he also described for six months the events for the semi-documentary film Story of G.I. Joe (1945) directed by Ernie Pyle. Burgess Meredith, Robert Mitchum, and Freddie Steele played in the movie.

Further, Arthur became the author of the play All My Sons, which was published in 1947. It is noteworthy that Arthur tried his abilities as a writer earlier, but all his efforts were a failure.

Therefore, the genius of literature has sworn that this work would be his last attempt to win the favor of fortune. The writer promised to find another job if that play did not have commercial success. But fortunately, Miller's thoughts failed to come true. After the release of All My Sons, he received the laurels of honor, recognition, and fame. Moreover, he became the Donaldson Award winner.

Later, in 1949, Arthur Miller pleased book lovers with the tragedy Death of a Salesman, which is rightly considered the masterpiece of the genius. It is worth mentioning that the play debuted on Broadway stage and since then it has become a favorite play among theater directors, who place it at the same level with the classic works of William Shakespeare.

The plot of the manuscript is simple and non-trivial. The main character is the traveling salesman Willy Loman, who does not know what luck is. The traveler gets a pittance for his work, besides he is swamped with numerous loans, which he cannot pay off for many years.

Willy grew up without a father, and he is not a chivalrous man, on the contrary, he instills in his children dubious values and teaches to make frauds. But eldest son Biff does not want to stand on the path of the underworld and on the contrary teaches the father to stop living in lies and deceit. This play does not have a happy ending. The traveling salesman deliberately crashes into the car to get the insurance payment to "reward" his offspring with money.

Miller’s play became so popular that the director Laszlo Benedek decided to screen the work of Arthur, shooting the film under the same name in 1951. The main roles were performed by Fredriс March, Kevin McCarthy, Don Keefer and other stars.

Four years later, Arthur Miller presented to the public the play The Crucible (1953). The fictionalized story immerses readers in the history of the Salem witch trial.

The playwright was inspired by the English legend telling about unprecedented trials that happened in the ill-fated village of Salem. From 1692 to 1693 more than two hundred people were accused of witchcraft, 19 were hanged, one man was thrown with stones, and the rest of the "criminals" were sent to prison.

Arthur Miller wrote the play The Crucible as an allegory between judges and the Political Commission of Senator McCarthy, (excesses against citizens with "anti-American sentiments") and he was included into the "blacklist" of Hollywood for this work. But the writer did not give up and continued to work on plays. There are more than 30 works on his record, many of them were staged in theaters.

In 1955 Arthur Miller pleased the sophisticated ladies and gentlemen with the play A View from the Bridge, which received rave reviews of literary critics. In 1964, after a series of manuscripts, another significant work by Miller was published. It was the play Incident at Vichy. The plot tells about a group of soldiers detained by German officers for racial inspection.

By the way, the author wrote only one novel Focus, which was published in 1945. The book tells about the Anglo-Saxon Lawrence Newman, who disliked people of a certain national identity. But fate played a cruel joke with the protagonist as Newman has to wear glasses because of the poor eyesight and he looks like a Jew. Now Lawrence has turned into an outcast of society being a successful man before.

Every American was for sure jealous of Arthur Miller. Firstly, he had an acute mind and an amazing ability to work, and secondly, the genius of literature was married to the most famous blonde of the Dream Factory Marilyn Monroe.

It is known that they met at a cocktail party in Hollywood in 1950. Their meeting happened by chance, and the modest beautiful woman was struck by the intellect of her future lover. Further, after small talks, Monroe and Miller spent together three days, in total it took about eight hours.

The lady complained to Arthur that she had no friends, and told that her interlocutors paid attention not to the soul, but to the appearance. It was Miller who advised the blonde woman to attend acting courses. But the writer and actress said goodbye, and later exchanged a few letters. Their communication ended, and in 1954 Marilyn accepted the marriage proposal from Joe DiMaggio, but the relationship of the couple ended in divorce.

The writer was also married to Mary Grace Slattery, who gave birth to two children. However, the writer began to live with Mary even before the meeting with Monroe, so the unhappy spouse had to file for a divorce. In 1955, Monroe met Miller in New York again, and on June 29, 1956, the lovers got married. This relationship lasted for five years and ended in divorce.

Arthur Miller’s third and last choice was the photographer Inge Morath, who gave birth to two children, daughter Rebecca, who became an actress, and son Daniel, who was born with Down syndrome.

The cause of death is acute heart failure.