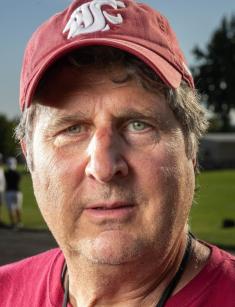 Mike Leach is an American football head coach famous for his worth with Texas Tech and Washington State. The beginning of 2020 brought the news about the man’s new contract with the Mississippi State University.

Michael was born in California on March 9, 1961, into the family of Frank and Sandra Leach. The boy grew up with four sisters and a brother. Unlike the majority of coaches, he had no football background as a school student, although he liked sports, especially baseball. Mike and his younger brother Tim could spend hours playing the game. Young Leach stood up for his accuracy, from taking notes about matches to measuring results with a stopwatch.

The family was frequently moving, and the boy did not have many opportunities to make friends. However, such a lifestyle taught him to be adaptable to new situations and places.

After graduation, Leach continued his education at Brigham Young University. In 1983, he earned his degree in American studies and entered the Pepperdine University to study law.

Leach started his career as a graduate assistant at Cal Poly-San Luis Obispo. The first years were challenging for the young man and his wife: they had to move several times while the salary and conditions left much to be desired. Leach would spend no more than two or three years in a college and then leave.

The work with the Valdosta State and the Kentucky Wildcats was beneficial: Mike was an offensive coordinator there. He preferred an active offense rather than defense and focused on passes, which proved to be useful later.

The pass-based offense became the fundamental part of the Raiders’ victories. Still, there were unpleasant moments, too: Leach accused the officials of bias in 2007 when his team lost to Texas. A new scandal erupted in 2009 when the coach allegedly mistreated one of his athletes, Adam James. Because Leach refused to apologize, the Texas Tech fired him.

There was a break in Mike’s coaching career: he worked as an analyst for CBS College Sports Network, hosted a show on SiriusXM College Sports Nation Channel 91, and created an autobiography Swing Your Sword: Leading the Charge in Football and Life with Bruce Feldman’s help.

2012 was marked with the come-back: the coach began to collaborate with Washington State. The first moments were not much favorable: new accusations of abusing players appeared, and few victories colored the dark picture. The investigation proved that the coach had caused no violence to the wide receiver Marquess Wilson, who initiated the accusations.

2015 brought a breakthrough: the Cougars’ record improved significantly, and the team participated in the Sun Bowl. All in all, they had six bowl game appearances and 55-47 combined record with Leach.

Mike was quite sentimental when he finished the work with WSU: she shared a touching good-bye note on Twitter, which was rare for coaches.

Mike met his would-be wife, Sharon, as a university student: they belonged to the same company of friends and fell in love eventually. The engagement and wedding took place in 1985. The first kid, the daughter Janeen, was born the same year; overall, the couple has four children. Besides, Mike and Sharon have three grandchildren.

The coach loves animals and has a dog. Mike has no Instagram page, but he is quite active on Twitter and regularly shares photos and makes comments there.

A documentary about Leach is being prepared now: HBO is allegedly interested in the project.

Michael is on good terms with Donald Trump; he has his autograph in his cabinet.

In January 2020, the news about Mike Leach’s new job came: he was going to coach the Bulldogs. Lane Kiffin and other Mississippi members welcomed him via Twitter.

Mike Leach’s net worth is $8 million in 2020. His salary at Mississippi State University will be $5 million annually.