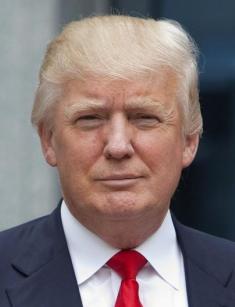 Donald Trump is an American billionaire businessman known for his outspoken communication style and extravagant lifestyle. It doesn’t spoil his image of a successful and purposeful person. In 2015, the scandalous tycoon made a loud statement, in which he expressed his intention to become the greatest President of the United States and decided to run for presidential election in 2016 self-funding his own campaign without sponsors and lobbyists.

Donald John Trump was born on June 14, 1946 in the largest borough of New York City in Queens into a millionaire family. He was not the first child Fred and Mary. Their family consisted of five children, the most difficult was Donald. He inherited pushy and assertive character from his father and it caused problems for his parents.  School teachers thought he was an unbearable child. So parents decided to pick up their son from secondary school and sent him to the Military Academy hoping the discipline of the school would channel his energy in a positive manner.

Education in the New York Military Academy eventually gave results. Donald was taught to be disciplined, learned how to survive in a competitive environment, when in order to achieve the desired result a person should be a little aggressive. After the academy before Trump became a question of higher education.

At First, he wanted to go to the cinematic university, but then entered Fordham University and decided to follow in his father's footsteps and became a businessman. In 1968, Donald Trump got bachelor's degree in economics. Trump followed his father into a career in real estate development. From the very beginning the future billionaire understood he was in his element. Since then the biography of Donald Trump was filled in this direction.

Donald Trump was "infected" with the idea to build his own empire. And being a student he became involved in business projects under his father’s patronage, for whom he was a favorite. His first deal allowed future construction magnate to earn US $ 6 million without investment. It strengthened his self-confidence and faith in bright future.

In 1974, Donald won his first tender and bought Commodore Hotel almost for a song, under the obligation to carry out its reconstruction. This allowed Trump to get very good bargaining position with the authorities in order to have loyal tax conditions for the next 40 years. It took young businessman 6 years to rebuild old hotel into a new luxury hotel «Grand Hyatt». Another Donald Trump’s ambitious project became a 58-story skyscraper with a 80-foot waterfall called Trump Tower. He became the highest and most luxurious building in New York. Within a short period, all offices in the building were sold out, and the business center has become a symbol of luxury. Trump brand became known worldwide.

The next step to wealth for Trump became Atlantic City. Trump brought in his younger brother Robert to head up the complex project. In 1982, the project was successfully completed and the $250 million complex Harra was opened. After a while Donald purchased it and renamed the facility Trump Plaza Hotel and Casino, which became known as the most expensive hotel-casino in the world.

In 1990, at the peak of wealth, Trump’s empire was on the verge of bankruptcy. His lack of administrative experience turned against the businessman, and he began to lose control of the business. Donald had a debt about $10 billion; $900 million was his personal debt, because previously he spent money on his own needs and not for business development. But cool spirit and composure allowed the businessman to improve his financial situation and overcome the crisis. It took him 3 years.

By 1997, the tycoon managed to escape the debt trap and completely covered the debt he owed to creditors. He started to create new projects and just in 4 years the Trump Company completed the construction of 262-meter Trump World Tower, which rose directly in front of the UN headquarters in Manhattan.

At the same period, the businessman continued to work on the construction of the International Hotel and Tower in Chicago, which was completed only in 2009. This project overcame difficulties including September 11 attacks and financial crisis in 2008. Trump was unable to pay creditors 40 million dollars in time, which caused him laying-off of construction works. As a result, in 2009, not wanting to cover the debt with personal funds, billionaire filed for bankruptcy and left Board of Directors of his own company, in order to prove the creditors that the crisis is a situation of force majeure, in which they had no right to demand his debt payments.

In 2015, the American billionaire expressed his intention to run for the US presidency and willingness to participate in the presidential race for the 2016 elections. During the election campaign, the businessman showed himself as a successful American. At the same time he paid his participation in the presidential election from his own pocket without help of lobbyists and sponsors. This step drew a line between him and other candidates.

Trump made loud statements that he could be the best American president and will make rich every citizen of the country. At the same time, Trump pays special attention to Russia.  According to his words, he will be able to establish good relations with Russian President Vladimir Putin, as the confrontation between the US and Russia is based solely on the mutual dislike of two leaders.

Donald Trump thought he was a leader in the presidential race. He is well-known for his extravagant actions and scandalous statements and called his opponents incompetent "idiots." He was confident that people will support him in the elections, and he will defeat his main opponent Hillary Clinton in the fight for the seat of the head of state.

Donald Trump election campaign is full of scandalous statements, which cause indignation among current US government and Trump’s opponent in the presidential race Hillary Clinton.

In November 2015 Donald Trump expressed support for Russian special operation in Syria. Then, Trump said: “If Putin wants to go and knock the hell out of ISIS, he will do it, 100 percent." He is bewildered why the West accuses Russia of "crimes" in Syria.

Donald Trump is also famous for his anti-Muslim stance. He opposes the migrants from Mexico and the Middle East, and promised in case of victory to build a "Great Wall of China" between the Mexican and US territory. if the billionaire wins in the presidential elections in the US-2016 he is also ready to change legislation that would prohibit the children of illegal immigrants born in the United States, receive US citizenship.

In regard to internal policy of the United States, Trump also follows his own policy, which is completely against the current White House policy. He opposes Barack Obama medical program because it costs the country too much. Instead, US presidential candidate has promised to come up with cheaper and more effective methods for taxpayers. Thus, health care facilities will be available to people due to loyal conditions.

For the development of the national economy Trump offered to return the US manufacturing base to the United States and to increase duty on goods produced by US companies abroad. Also politician-businessman calls for a trade war with China. Victory will allow America to take a worthy position on the trading floors around the world.

The main theses of his election campaign and plans for the revival of the country in case of his victory in the US presidential election, Donald Trump has stated in the book "Crippled America ", which was published in 2015.

On November 8, 2016 the first general elections were held in the United States. The election results in the United States stunned the entire world - Donald Trump won the race for the presidency, despite numerous predictions about the fiasco of the businessman. The politician obtained the majority (276 electoral votes, 270 votes enough to win). Hillary Clinton finished second in the presidential election (218 electoral votes).

Hillary did not speak to her staff, but found the strength to call her opponent and admit the defeat. In response to this traditional American gesture Trump admitted the strength of his opponent and wished her all the best. US Congress will approve the voting results on January 6, 2017, and Donald Trump will take up responsibilities of 45th President of the United States on 20th of January.

Currently, Donald Trump is one of the most successful businessmen in the world. In 2016 his fortune is estimated at $ 4.1 billion. He owns several million square meters of the most luxury properties in US. Many builders pay Trump in order he become "face" of their projects.

In addition to the construction Donald Trump has other successful business, namely World competition organization, such as the "Miss Universe", education, sports, tourism, perfume industry, the production of men's clothing, watches and accessories.

In 2009, billionaire Donald Trump became the creator of a new branch of marketing network, specializing in vitamins sale. Construction tycoon hopes to become a major competitor to the world-famous company Amway, and as well as in real estate business he wants to become a “face” of this industry.

Donald Trump personal life is not as perfect as his career. He was married three times and has five children and six grandchildren. Donald married his first wife in 1977. It was Czechoslovak model Ivana Zelnichkova, who gave birth to their three children. It did not save their relationship, and in 1992 their marriage broke up.

Second wife was an actress Marla Maples Anne. They married in 1993 and she also gave birth to a daughter. But it didn’t make them happy. After 6years of marriage they divorced.

In 2005 Trump married Melania Knauss . She is 24 years younger than him. Billionaire called his third wife the love of his life which filled his inner world with happiness and peace. Wedding gift for Melania was the ring with diamonds weighing 13 carats cost $ 1.5 million. Donald received it in advance from the jewelry company “Graff”.

A year after the Melania gave birth to their son Barron William Trump, who became the fifth child of a billionaire. In 2016, US presidential candidate became a grandfather for the eighth time. His daughter Ivanka Trump gave birth to her third child Theodore James.

During the election campaign, Donald Trump was involved in a scandal associated with his personal life. The press got explicit photos of his wife Melania, who had nude photo shooting for Max magazine in 1998. Billionaire reacted calmly to these images, and said that at the time his wife was a successful model and these «naked» photos have been made even before he met her.

In addition to business and family, Donald Trump is known to play golf. Billionaire regularly participates in the competition on his own playgrounds. He even wrote a book "The Best Golf Advice I Ever Received" in which he compared golf with his success in business. Donald Trump plays golf

Donald Trump also has not forgotten about his childhood dream to get on TV. Being a successful businessman, he decided to begin acting career. He was invited to play himself in a comic performance. Trump can be seen in such films as "Home Alone 2", "The little rascals", "The Time of Our Lives," "The Fresh Prince of Bel-Air." In 2003, Trump became host of his own reality show "Apprentice". He gives special tasks to the participants.

The winner is guaranteed to get position of top manager in the company of construction magnate. TV Show was very successful and brought Donald worldwide fame. This billionaire became the highest-paid American host. The fee for each issue of the TV project is $ 3 million.

Successful career on TV does not prevent Trump from being a successful businessman.  There are 22 thousand employees in his company, who consider him loyal, but stingy boss. Billions in wealth did not prevent Donald from being purposeful and hard-working. More than half a century, his business is booming, and he finds the strength to conquer new horizons.