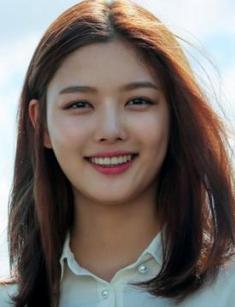 Korean actress Kim Yoo-jung started filming as a child. The charming girl with a doll face first appeared on the screen at the age of 4. Since then, she has had dozens of roles in movies, experience in the modeling business, and several tracks where she tried her hand at singing. In 2017, the 17-year-old actress took the 8th place in the list of influential celebrities of Korean Forbes, becoming the youngest person ever to be in the top ten. Kim Yoo-jung has a net worth of $6 million.

Kim Yoo-jung was born on September 22, 1999, in Seoul, the capital of South Korea. The actress has an older sister, Kim Yeon-jung, who is very similar to her.

Korea is watching Kim's growing up live. The girl has been starring in popular projects since childhood and has even been nicknamed "Korea's Little Sister." Kim Yoo-jung first appeared in the camera lens in 2003 when she starred in cookie commercials.

The girl loved to sing, dance, and play princesses. Her grandmother saw the talent of the little actress and brought her to the talent agency. Here, Kim Yoo-jung became the youngest star in history. Since then, she has been in demand as a child actress in Korean cinema. The young actress managed to work with famous actors, and she showed maturity and professionalism early on the set.

In 2017, when it was time to go to college, Kim refused to apply to university to focus on working in the movie business.

In addition to filming, the Korean woman is also involved in the production of clips. In 2013, together with Xiumin from EXO, she starred in a video for the song "Gone" by singer JIN. The actress herself likes to sing: in 2014, Yoo-jung recorded two tracks - "We're Happy" and "I Love So Much."

Kim's acting career began at the age of 4 when the future star received a small role in the military drama DMZ by Lee Gyu-hyeong. This was followed by participation in the triumphant Venice Film Festival called Sympathy for Lady Vengeance (2005). Since then, the girl has been involved in several projects every year, where she often plays episodes of the characters in their youth.

In 2008, Kim Yoo-jung won her first award in her career. The SBS Drama Awards recognized her as the Best Young Actress for her role in the melodrama Iljimae. In 2010, the girl got her first significant independent role without any reference to the youth of the main character. She starred in the fantasy dorama Grudge: The Revolt of Gumiho and again won in the category Best Young Actress.

When the young actress studied in the 5th grade, she already had 13 doramas and 15 films on her account. Gradually, Kim's roles become more complex and the time she spent on the screen increases. Having played a problematic teenager in Thread of Lies (2014), the girl received high praise from critics.

In 2015, Yoo-jung filmed in the social dorama Angry Mom, which raised issues of corruption, school bullying, and violence. The actress plays the daughter of the main character, a person with an influential and controversial character.

Since 2016, the girl has been playing adult roles, beginning with romantic heroines in melodrama. The popularity of the series Love in the Moonlight went far beyond Korea and became known as the "moon boom." For this work, the actress received five awards from various associations, and critics and journalists called it perfection.

In 2017, Kim Yoo Jong's filmography was expanded with the comedy Because I Love You.

The young actress focuses on work and self-development. The young woman has not yet had a serious relationship, and, accordingly, there is no husband or children. Kim Yoo-jung calls her favorite cat her child.

Sure, impatient fans want to find a date for their favorite actress as soon as possible. Therefore, she is enthusiastically attributed novels with colleagues on the set. Park Bo Gum, with whom the girl was filmed in the historical dorama Love in the Moonlight, is not her boyfriend but only a friend.

Lee Min-ho, a partner in the series Moon Embracing the Sun, is considered to be another beloved of Kim. Although the actor himself in public confessed to the tender feelings for Yoo-jung, she did not show any feelings back.

The demanded and popular actress by nature is a home-seat and she admits that she prefers to watch movies lying on the couch with the cat in her arms to any entertainments. The Korean girl is friendly and open, although her characters are often arrogant and pompous.

The young woman attaches great importance to friendship. Her best friend does not belong to the world of show business, but is a classmate. The girls have been friends since elementary school.

Kim Yoo-jung is often compared to actress Kim So-hyun. The girls have not only been engaged in the same profession since childhood, but they also look alike. However, they do not have much in common, and they rarely meet each other.

In February 2018, the actress announced that she had some problems with health and was diagnosed with dysfunctions of the thyroid gland, and she temporarily stopped to take part in the shooting. The girl paid much attention to recovery: played sports, a proper diet, including fresh vegetables and fiber.

An unexpected passion for Korean women is fishing. Yoo-jung said that the biggest fish she managed to catch was more than a meter long. The tiny girl is 5'4'' (162 cm) tall and weighs about 103 lbs (47 kg).

In September 2018, the actress began shooting in the dorama Clean with Passion for Now. She got the lead role in the series about a cleaning company. Kim Yoo-jung's character is not the neatest one, but a guy obsessed with cleanliness falls in love with her. The comedy melodrama has managed to get an army of fans and high ratings. On January 15, 2019, the final episode of season 1 was aired.

The actress shares her personal life news and latest cute photos in her official Instagram account. Here you can also find out what kind of music the Korean woman listens to and what kind of movies she watches.

The actress often gives interviews to popular publications and admits that she regrets the end of the teenage period. However, Kim is pleased to be growing up and becoming a source of strength for herself. The girl is a frequent guest on Korean TV shows.