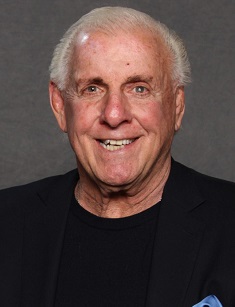 The American wrestler became a real legend thanks to his long-lasted and prolific career. He is well-known for his rebellious behavior and passion for wrestling. During his long career, he formed several groups that used power against the rivals and hold the majority of titles. His signature signs became a scream "woohoo!" decorated robes and bad ass reputation. His career was near to the end in the very beginning when Ric was involved in the severe air accident and broke his back in three places, but he managed to recover and to prove his prominent athletic abilities. As a result, there are numerous titles and awards to his credit and international recognition.

The doctor and the journalist adopted Ric at an early age. After his adoption, the boy and his new family settled in Minnesota. Here he spent all his childhood. Ric attended the preparatory boarding school in Wisconsin, where he tried himself in sports. Ric told that since early ages he knew what he wanted to do in the future, moreover he was an athlete from nature. He entered the college but dropped out, that's why he worked as a bouncer for some period.

In 1971 he attended the camp where he honed his skills and finally made his debut on the ring. He adopted the shortened form of his name and entered the national association of wrestling.

In 1973 he got his first working agreement between his promoter and International Wrestling Enterprise. Then he left the association and began to work tours for All Japan Pro Wrestling. He continued to tour Japan with events in the 90s, that time he changed the wrestling association again. He continued periodically to visit Japan before 2013. His last match was scheduled on the 26th of January in 2013, but in the final minutes before the fight, the promotion announced that the wrestler couldn't take part in the contest and would be substituted due to health issues. As it turned out, he had a severely swollen leg.

In 1975 he captured his first single title when he participated in the Mid Atlantic TV Championship and beat Paul Jones. But then his career suddenly broke when he was involved in the airplane crash. The severe accident took the life of the pilot, paralyzed the professional wrestler Johnny Valentine. Ric was 26 years old, and his back was broken in three places. The doctors said that he could never return to professional wrestling. But thanks to rigorous physical therapy, Ric managed to return on the ring eight months later. This crash forced Ric to change his fighting style, which he would use all his career. He won the title in 1977 and then held five reigns as a champion. Officially, Flair won the title more than eight times. Flair lost the title to Race and won it back in three days in New Zealand and Singapore in March 1984.

In 1985 two wrestlers began helping Ric in attacks. The Andersons, Blanchard, and Ric allied and called themselves "The Four Horsemen." The four rule-breakers proved to be the evilest alliance that ever existed. The wrestlers used their strength in numbers and controlled the majority of the titles. In 1987 Ric lost his main title as a heavyweight champion to Gravin. Two months later, he returned his title. In 1988 he participated in the Clash of Champions and feuded with Sting and Ricky Steamboat. In the 90s, the wrestler remained to be a top draw but was fired from World Championship Wrestling due to contract dispute.

In 1991 he signed the contract and began to appear on TV. In 1992 he won the title in the match against Rumble. Then he fought with Randy Savage, who defeated Ric for the title, he made his last appearance in the federation.

He hosted a talk show in WCW 1993. Arn Anderson often appeared on the show. He briefly held the title but defeated Windham. He participated in five-match series in which he won the series, with two wins, one loss, and two draws.

In 1995 he wrestled against Antonio Inoki in North Korea in front of 190,000 spectators. In 1995 he performed as a part of the "Four Horsemen." In the fight against Savage, his manager became Ric's valet.

The wrestler was a highly demanded and well-known fighter. He had a bright style, often broke the rules, was incredibly popular thanks to his pathos, and scream, "Woohoo!". Since the 70s, Ric wore fur decorated robes. He describes himself as "limousine-riding', jet-flyin', kiss stealin', wheelin' dealin', son-of-a-gun (who kissed all the girls worldwide and made em cry." In 2004 he released his autobiography. The wrestler is also famous for his quotes and catchphrases:

"To be the man, you gotta beat the man!"

In the 2000s, he won his last title when WWF purchased WCW. He was the leader of the evil group, the "Magnificent Seven." He said that he was happy when WCW was finally closed down.

In 2001 he took hiatus and returned with the new role – co-owner of WWF. In 2002 he defeated McMahon. Till 2009 he continued to appear in fights. In one interview, he stated that he would never retire. Since 2009 he announced his part-time appearances. He delivered his farewell address, and many current and retired wrestlers thanked him for his contribution.

In 2012 he was inducted into the WWE Hall of Fame for the second time. He returned to WWE as a non-wrestling personality on the Slammy Awards show. But his return was interrupted by two other wrestlers escalating into a confrontation that ended with him locking Heyman in the figure-four leglock. After clearing the ring, Flair was assaulted by The Shield, until Ryback and Team Hell No (Kane and Daniel Bryan) helped Flair fend off the group.

His seventieth birthday was celebrated in a special episode of Raw. He appeared on TV shows and made his feature movie debut in "Magic Mike XXL."

Ric was married five times and has got four children. His first marriage lasted for twelve years and brought him, two children. He married again in 1983. This marriage gifted him two more children. His wife and kids appeared in WCW. After 23 years of marriage, the wrestler divorced. In 20086, Ric married the fitness competitor, but they divorced in 2008. In 2009 the wrestler married again but soon filed for divorce. Now he is married to Wendy Barlow.

The wrestler had some problems with health. He was diagnosed with alcoholic cardiomyopathy. In 2017 he had surgery to remove an obstructive piece of his bowel. The wrestler's net worth is estimated at $6,5 million.

He was arrested after the road incident when Ric went out of his car and grabbed the motorist by the neck and kicked the door off the motorist's sport utility vehicle. In 2007 his financial business failed, and Ric filed for bankruptcy.

Highsports Inc. stated that Ric gave his belt as collateral for the loan. But someone paid Ric's debts, and the problem was solved. The wrestler announced that he was going to run for governor of North Carolina. But Ric didn't fill the papers.