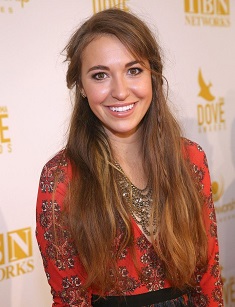 Lauren Ashley Daigle is an American representative of contemporary Christian music. She gained wide recognition after the release of her debut album How Can It Be in 2015. Lauren is the owner of various awards, including Grammys and American Music Awards.

Lauren Daigle was born in Louisiana in 1991. In childhood, she was inspired by blues, zydeco, and Cajun music. Lauren’s mother called their house “the music box” because Lauren was always singing at home. Firstly, Daigle did not take her interest in music seriously.

However, after she was diagnosed with cytomegalovirus, everything changed. For almost two years, Lauren has not attended school due to the immune deficiency, and while recovering at home, she learned singing. Her mother considered these lessons a kind of rescue from her daughter's depression. Then, Lauren came back to school education, completed it earlier, and after graduation, she had a gap year which she spent in Brazil doing mission work. A year later, Daigle entered Louisiana State University, where she majored in Child and Family Studies.

Lauren’s singing career started when she was a member of the choir. In 2010 and 2012, she participated in the singing competition series called American Idol. It was Daigle’s family that encouraged her to take part in this competition. Lauren made her debut while recording Close and You Alone at North Point Community Church for the band North Point InsideOut. In 2015, she appeared in this band’s album North Point Beginnings.

Daigle also worked with the band The Assemblie on their EP. After its release, the contemporary Christian music label called Centricity Music offered her to attend their workshop. Eventually, the singer who was supposed to perform at the main event got ill, and Lauren replaced him. In 2013, she signed a contract with the Centricity Music. That year, Daigle created her first single Light of the World, which was included in the album Christmas: Joy To The World that was released together with other artists of Centricity. This song was Lauren’s introduction to Christian music, so she gained a lot of attention. Also, in 2013, she was offered to perform at the Morning Rises Fall Tour together with Aaron Shust and Mikeschair.

In 2015, Daigle released her first album How Can It Be. It got the first position on the Billboard Christian Albums Chart, and it also was certified platinum. This project can be considered as the singer’s breakthrough. For the single How Can It Be, Lauren got her first award, Worship Song of the Year.

In 2016, the singer released How Can It Be: Deluxe Edition, which included not only the original tracks but also two new songs, First and Come Alive. Also that year, Daigle’s next album Behold: A Christmas Collection was released, and some of its singles appeared on Christian radio. In 2017, Lauren sang Almost Human that was used for the Blade Runner 2049: Original Motion Picture Soundtrack. That year, the song Back to God was performed by Reba McEntire and Daigle.

In 2018, Daigle released You Say that was the lead song of her third album Look Up Child. After its success on the Christian radio, the single was translated on the mainstream radio, and its video was uploaded to YouTube. For You Say, Lauren received the Grammy Award in 2019. The single has been at the top of Hot Christian Songs chart for 54 weeks, and it was the second great result after the song Oceans (Where Feet May Fail) by Hillsong United.

After the release of You Say, the singer was often compared to Adele, another female singer with a strong voice, and she also appeared on The Ellen DeGeneres show. In order to promote her new album, Daigle went on tour, and she visited Morrison (Red Rocks Amphitheatre) and Los Angeles (Baton Rouge), and she plans to perform at the State Farm Arena in Atlanta.

For now, Lauren is focused only on her career, not on the love life. As a member of the Christian community, she has no judgment for homosexuals who, by the way, depict a controversial topic for Christians. Due to the lack of heterosexual relationships (at least, which are known publicly), Daigle is surrounded by rumors about her sexual orientation.

Daigle was nominated for 29 awards, and she won 16 of them, including Billboard Music Awards for her albums, How Can It Be and Look Up Child and Grammy Award for the song You Say.