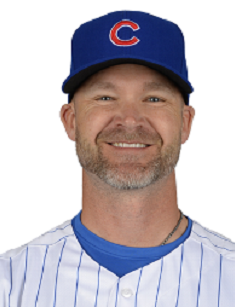 He is the skilled athlete who displayed a good game and strong leadership for more than twenty years of his career. His experience and flawless reputation allowed him to continue post-playing career and reach new heights.

All his childhood, he spent in Florida where he played various sports and attended the high school. His parents are both professional athletes, as well as his uncles. That's why his future was defined for the very beginning. The boy inherited an athletic body type and was good at various games. It is not surprising that the young man managed to gain a scholarship and continued to play baseball in college.

During his college years, the athlete succeeded and led his team to the final in the region. He played for two teams and then was drafted in 1995.

In 1998 he began playing for the LA Dodgers, and four years later, he made his debut on MLB. Then he briefly played for the Cincinnati Reds and the San Diego Padres. The 2013 year was a special one for the player as he won his first championship. This year he appeared on Saturday Night Live with Bill Murray to celebrate this victory. Later, in 2016, he won it the second time as a member of the Cubs. Through his more than a 20-year-old career, he played for seven professional teams. He demonstrated exceptional features of a leader and managed to inspire the team for the victories.

After the retirement, the experienced player hadn't stayed without offers and job. The team offered him to continue work as a special assistant. In 2017 he also became a color analyst for a channel.

On the 24th of October, Ross gained a significant promotion. The team named him its manager and signed the contract for three years. As it reports, the club considered four more active candidates, but after the thorough interview, the club realized that Davis is a perfect candidate. One of the demands for the candidate was flawless interaction with the Media. They asked to give mock press conferences as well as speeches to the team. This test showed that Ross is the best.

This is not a big surprise, as he has a bright personality and charisma. But there is one crucial nuance that shames many people. David hasn't ever do managerial work, and whether he manage it is a big question. The president of the team said that it is the perfect decision to hire the champion of the 2016 year to move the team to new success.

He became the first baseball player who agreed to compete in the popular dancing TV show. In 2017 he released the book telling his path to success. His net worth is estimated at $2 million. He tied the knot with his wife in 2015, who is his long-term girlfriend. This marriage gifted him two daughters and a son. He is a Christian. In his free time, he collaborates with charitable organizations. As a famous athlete with flawless reputation Ross sometimes appeared on commercials.