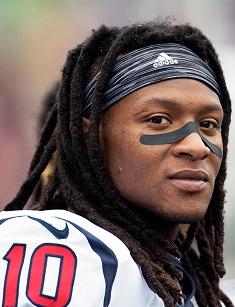 The Central native, DeAndre Hopkins, started a football career in NFL in 2013 as a rookie of Houston Texas. He became the 27th number of 2013 Draft. He plays at a wide receiver position. Hopkins was 2015, 2017, 2018 Pro Bowl participant. His net worth is roughly estimated at $10 million, including all of his properties and earnings.

The birthplace of DeAndre was Central. He was born to his dad, Steve, and mom, Sabrina, on June 6, 1992. He became the fourth baby in the family. Steve was something of a drug kingpin in South Carolina. He was imprisoned when his son appeared. Five months later, Steve died in a car accident. He was out on bail, facing the prospect of spending several decades in prison for trafficking. DeAndre and his mom were in the car too, fortunately, they avoided serious injuries unlike Steve. The boy learned about the incident when he was six.

DeAndre studied at the local high school and was interested in various sports. He was involved in football, basketball, track and field, and became the state champion in basketball and was highly ranked in the nation as a wide receiver, writing his name in school’s record book as the best ever player in number of receiving yards, touchdowns, and in 100-yard receiving games. He reached 12.

In 2002 Sabrina Greenlee, the boy’s mother had short romantic relationship. In three months of dating, she was blinded in a violent attack, when a girlfriend of Sabrina’s guy threw a mixture of bleach and lye on her. Sabrina had no idea the man was in another relationship. Though Sabrina’s vision came back in spurts thanks to various surgeries and procedures, the reality was she could hardly see her four children. Soon her vision went away completely, but she heroically fought to stay alive and continue to raise her family.

Received a Clemson University’s scholarship, DeAndre immediately joined the Clemson Tigers and continued playing football on high level. He was a Tiger for three years. In his debut game, DeAndre scored two catches for 23 yards, adding his first touchdown in Week 2. The rising star improved his skills every game.

DeAndre began his sophomore year from eight catches for 183 yards and one touchdown. That year he led the Tigers to the victory in the Atlantic Coast Conference, scoring seven catches for 92 yards in a victorious finale. Moreover, the Tigers reached the 2012 Discover Orange Bowl at Sun Life Stadium. However, they were beaten by Virginia.

After heavy preseason preparation for his junior year, Hopkins showed his best collegiate stats. He led the Tigers and the Conference in the key numbers. He made 82 catches for 1405 receiving yards, adding 18 touchdowns, the best result in Clemson’s history. As a result, the heads of ACC named him to the First Team of the 2012 collegiate season. In January 2013, Hopkins declared for upcoming NFL Draft. Going through Combine tests, DeAndre got injured his calf muscle and couldn’t finish it.

The reporters and analysts predicted Tigers leader’s draft in the first round, as he was a highly ranked wide receiver. As a result he got the 27th overall pick and joined the Houston Texas in 2013. Soon the sides signed a four-year $7.68 million contract. During the preseason camp, Texas’ head coach named their rookie as a starting player for the season’s beginning. In Week 1he made five catches for 55 yards.

DeAndre started all 16 games in his rookie season. After reaching 52 catches for 802 yards and two touchdowns, he was included in the list of the best year’s rookies. Texas’s fans loved the player from the first days. By the beginning of the 2015 season, DeAndre had established his role in the team as the leading wide receiver.

The same year, Hopkins was named to Pro Bowl as the19th best player of the league. In summer 2016, he signed an endorsements deal with Adidas. In September he was involved in the curious case. The league fined him $6076 uniform violation for improper cleats in his shoes in a game against Chicago Bears. After that, the player stated he wouldn’t wear his Kanye West’s designed shoes once more.

Making 16 starts in 16 games, the third season in a row, the Central native showed the lowest stats since his rookie season. He finished it with only four touchdowns and 78 catches for 954 yards. Despite that, Houston offered Hopkins to extend his contract in August 2017, and the sides found an agreement in a five-year $81 million deal, that paid off very quickly.

In December 2017, wide receiver became the member of Pro Bowl roster, leading NFL in number of touchdowns. Adding to the list quarterback, Deshaun Watson, Texans created the most prospective duo in the league. Hopkins and Watson connected for 11 touchdowns as the duo played together for all 16 regular-season games. Gone through a short injury in 2018, Texans’ wide receiver completed that season as the top-3 in number of catches and top-2 in number of receiving yards. He earned his second first-team All-PRO and third Pro Bowl selection in 2018.

As of 2019, DeAndre didn’t have a wife. In 2018 he announced his relationship with his new girlfriend, Iggy Azalea. That statement had stunned millions of fans when something went wrong. In a day, Iggy denied the relationship with DeAndre. Over the years, he dated Jennifer Lemmons, Colleen Crowley, and Amina Blue.