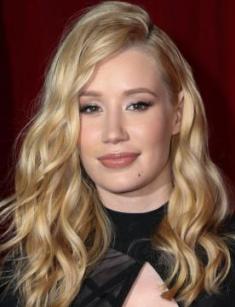 Amethyst Amelia Kelly, known as Iggy Azalea, was born in Sydney on June 7, 1990. Soon, the family moved to Mullumbimby, a small town in New South Wales. They owned a 12-acres territory; the girl’s father built a brick house with his own hands.

The man was a painter in training and created comics; the mother worked as a maid in hotels and holiday houses. According to Azalea, the father instilled the love for art in his daughter and gave her the unique “teenage” view on it. Gradually, it became the young woman’s philosophy.

Iggy felt attracted to music early. She dreamed of becoming a celebrity one day and took the first step at 14 when she started rapping.

At that period, the young talent created a small group with two other girls. Azalea loved to perform and rap, but she left the band soon: the colleagues did not take her intentions seriously.

Moving to the USA

Living in American was Amethyst’s cherished dream since her childhood: the beginning musician felt like a loser in her native country, and the country of hip-hop origin seemed to bring something different. The girl did not have pipe dreams, though: she was always determined about her wishes.

Soon after the failure with the group, Amethyst quitted school and began to help her mother clean hotel rooms.

When 16-year-old Iggy collected enough money, she moved to the United States. The parents would not approve of that, and Azalea had to trick them: she presumably went there to for a holiday with her friend and then informed them about her plans to stay in America.

Sometimes, young people’s dreams collide with the harsh reality, but the artist was lucky: she felt comfortable in the new place and knew it was the right choice for her. Amethyst did not even worry about money and the long distance to her home: she took odd jobs, enjoyed her daily life, and traveled across the US.

Initially, the young woman lived in Miami, Florida and then moved to Houston, Texas, to change it for Atlanta, Georgia. Eventually, Iggy Azalea settled in the most starring region, California, and chose Los Angeles; she lives there today.

Right after the would-be celebrity moved to the USA, she got her stage name: according to the woman, her old dog’s name was Iggy, and she often wore a necklace with its name. Those who did not know the story behind it believed it was Amethyst’s name. Little by little, the artist got used to being called that name and added “Azalea” that made the present-day pseudonym.

In 2010, Iggy Azalea began her career. As the 21st century young artist, she was not going to frequent recording studios and try to catch producers’ attention: instead, she posted her songs on YouTube. Soon, Iggy’s peculiar rap style and abilities brought many followers to her channel. In 2011, then the first official video “Pu$$y” was released, people started talking about her as the brightest young talent.

The mixtape Ignorant Art strengthened the singer’s positions and showed her individuality: provocative, bold, close to being vulgar lyrics could be called too frivolous, but hip-hop fans of the 21st century like such eccentricity.

Naturally, music companies took an interest in the new star. In 2012, Iggy signed the first studio album contract with Grand Hustle Records. Glory included “Murda Bizness” and five more tracks. They were freely available to the audience and downloaded more than 100 000 times.

In fall 2012, the artist presented the second mixtape TrapGold; soon, she started working on the new album The New Classic and its singles. The rapper had the chance to collaborate with Rita Ora who had the Radioactive Tour in Great Britain at the beginning of 2013 and invited Azalea to open her shows.

Further on, the first single from the new album, “Work” came out. The woman signed an agreement with Mercury Records, shot in a music video “Work”, and received an invitation from famous Nas to participate in his tour in Europe. June 2013 was marked with a charity concert Chime for Change in London; many stars including Jennifer Lopez and Beyoncé appeared there.

The next year brought the breakthrough: the single “Fancy” turned into an international hit. It topped music charts and became number one in Billboard Hot Rap Songs. Iggy was the first white girl rapper who achieved this result. More than four million copies of “Fancy” were sold in America.

The collaboration with Ariana Grande was fruitful: they performed the song “Problem” that also proved to be a success in Billboard. In fall 2014, Rita Ora remembered about the talented artist; the singers performed “Black Widow” together.

In 2016, the musician was going to present a new album, Digital Destruction, but it was postponed.

Iggy Azalea is famous for her non-classic body sizes: her hips and butt cheeks are pretty opulent, and the artist is proud of that; she often wears revealing clothes.

Rumors had it Iggy had implants, but no evidence followed. By the way, one can see her cellulite on the singer’s hips in some pictures. Some media reported the rapper also had breast surgery and posted pictures comparing Azalea’s before-and-after photos.

Not only Azalea’s lyrics but also her outfits shock people. In 2013, the singer appeared at the 2013 MTV EMA ceremony in Amsterdam wearing a “naked” dress.

The hip-hop world’s attitude toward Iggy Azalea is ambiguous. For example, the rapper Snoop Dogg, who is normally kind to other artists, initiated a massive scandal on his Instagram page; he claimed that Iggy did not deserve to be called a rapper, unlike Nicki Minaj.

Fans are interested in the details of Azalea’s personal life. The rapper A$AP Rocky used to be the musician’s boyfriend. Later on, Iggy began to date the basketball player Nick Young; the athlete even proposed to the woman, but she broke off the engagement when she learned about Nick’s cheating. Besides, Azalea was seen with the rapper French Montana.

In 2017, the rapper had an affair with the producer Ljay Currie; they had a vacation in Cabo San Lucas.

2019 will bring the second studio album In My Defense; fans are looking forward to it.