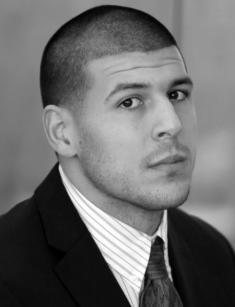 Aaron Hernandez was an American football player and member of the New England Patriots for three seasons. His successful story stopped in 2013 when he was accused of murder and imprisoned; the man committed suicide in 2017.

The future tight end was born on November 6, 1989, in Connecticut. The boy’s dad was Puerto Rican, and the mother had Italian roots. Their family life was stormy, full of conflicts, separations, and reunions. Although the father was sometimes abusive to Aaron and his brother, Dennis Jonathan Jr., he loved him, and the man’s death in 2006 was a severe blow for 16-year-old Hernandez.

The would-be sportsman went to Bristol Central High School and joined its football team. The young man’s achievements were impressive; he even tied the state record in this period.

Aaron played for the University of Florida; his relationship with the coach Urban Meyer was good. He helped Hernandez graduate early, even though he was not actually prepared for that, and focus on the college team. It was difficult for Aaron to combine academic tasks and training.

The athlete’s stats were excellent, but he frequently used marihuana. He finished his collegiate-level career with 111 receptions for 1382 yds and 12 touchdowns.

The New England Patriots drafted the young talent in 2010, the next day after Rob Gronkowski, also known as Gronk, from Arizona State joined the team. Despite his abilities, many teams were reluctant to select Aaron due to his controversial reputation.

The rookie year was advantageous; Hernandez helped the Patriots celebrate their 14-2 record and AFC championship. In 2011, the athlete made an invisible offensive machine along with Gronkowski; they had 24 touchdowns.

In 2012, the tight end signed a $39 million agreement with the team. He had an injury and missed some games; the match against the Baltimore Ravens was his last field appearance.

Aaron began to date his friend Shayanna Jenkins in 2007 when they both were high-school students. The couple continued their relationship after graduation and had a child together in 2012, getting engaged the same month.

The athlete purchased a huge mansion for his future family, yet his actions were not spotless. When Shayanna learned Hernandez had cheated on her, she left; the lovers reunited in summer 2012. There were also reports on his aggressive behavior.

After the sportsman’s death, his former classmate revealed their same-sex relationship; the family also confirmed Aaron had come out as gay to them. Sexuality became a painful issue for him: raised in a homophobic culture, he could not accept this fact.

In January 2020, a new Netflix release took place: the documentary Killer Inside: The Mind Of Aaron Hernandez. One can learn how the NFL star devolved to being a criminal and eventually took his own life.

The first legal troubles began when 17-year-old Hernandez had a conflict in a bar and used violence against a manager after refusing to pay for his drink. Another unpleasant story happened the same year when the athlete was said to be involved in a double shooting in Gainesville.

New issues followed in 2011-2013: the Plainville fight, Boston double homicide, and drunk driving. On June 26, 2013, Hernandez was charged with the murder of his friend Odin Lloyd, whose body had been found not far from his house in a park.

The Patriots immediately released him from the team; although some team members, including Tom Brady, had tried to have him following the right path, their endeavor went in vain.

Although the reason for the crime remains unclear, some articles report it that Lloyd probably discovered Hernandez was gay and intended to make it public.

The man committed suicide in his cell on April 19, 2017; autopsy proved he had taken drugs before. Later, a brain scan showed he had chronic traumatic encephalopathy resulting from previous head traumas; CTE was the primary cause of his violent behavior. The private funeral ceremony was held on April 24.