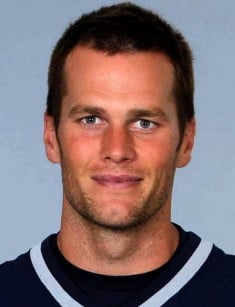 Tom Brady is an American football quarterback for the New England Patriots of the National Football League. Brady is one of two players who won five Super Bowls (along with Charles Haley), and the only one to have won them all with a single franchise. Thanks to Tom’s achievements, analysts consider him one of the best quarterbacks in the NFL’s history.

Thomas Edward Patrick Brady, Jr. was born on August 3, 1977, in San Mateo, California. The boy was the youngest child. Tom has three older sisters. The player's father, Thomas Brady, Sr., is of Irish descent. His ancestors fled to the USA in the 18th century during the Great Famine. The mother, Galynn Patricia Brady (née Johnson), had German, Norwegian, Polish and Swedish ancestry. Thomas is Catholic.

In the 1980s, the boy regularly attended San Francisco 49ers games with the participation of legendary quarterback, Joe Montana. He became a big fan of the team and saw the famous event when Montana threw The Catch to Dwight Clark at the 1982 game against the Dallas Cowboys.

In 1995, Brady graduated from Junípero Serra High School in San Mateo. In the 9th grade, he began playing football as a linebacker and quarterback and even tried his hand at baseball. He didn't achieve much success in school sports, but in the senior class, he created highlight tapes with information about himself and sent them out to schools with football programs which led to strong interest from these institutions.

Brady initially chose the Michigan Wolverines, a team at the University of Michigan. The young man was a backup quarterback for first two years. During this period, he even hired a sports psychologist because Thomas was unsure of his abilities. However, in 1998, Brady began to play in the first team and achieved success.

In his second season, Brady took over as the starting quarterback after Drew Bledsoe was injured. He led the Patriots to first place in the AFC East and the victory in the Super Bowl XXXVI. Brady also won his first Super Bowl MVP award.

Although the New England Patriots missed the playoffs following season, Tom helped the team win the World Championships in 2003 and 2004. Along the way, the team won an NFL-record 21 consecutive games (including the playoffs) between the 2003 and 2004 seasons. In 2005, Brady threw for 4,000 yards and led the NFL in passing. Then, the athlete won his 10th consecutive playoff game, another NFL postseason record.

Later, although the Patriots continued to win often, they did not return to the Super Bowl until the 2007 season. That year, Brady not only set an NFL record with 50 touchdown passes but he would also lead the Patriots to a 16–0 finish, which broke the record of the Miami Dolphins who finished 14-0 in 1972.

The Associated Press called him Male Athlete of the Year, the first such award given to an NFL player since Tom’s idol, Joe Montana, won it in 1989 and 1990. However, Brady missed almost the entire following season due to a knee injury. In 2009, he began to play again and was named the league's Comeback Player of the Year.

On September 10, 2010, Tom signed a four-year, $72 million contract extension with the Patriots, becoming the highest-paid NFL player. That year, the player led the team to a 14-2 finish. Brady was named the NFL MVP the second time in his career, and the decision was taken unanimously. However, the season ended prematurely in the first playoff game when the New England Patriots lost to the New York Jets, and Tom underwent an operation after the game due to a broken leg.

In 2015, Tom was involved in the scandal regarding the deflation of footballs. The player categorically denied his guilt. After a series of hearings and repeated appeals, Brady could return to the game in September 2015.

On February 29, 2016, the athlete extended the contract with the New England Patriots for two years, and three days later appealed the court’s decision to suspend him for four games due to the charge of deflation of balls. Despite the appeals, Tom was eventually found guilty, and the player posted on his Facebook page that he would miss the first four games of the 2016 season.

After returning to the team, Brady helped the Patriots win 11 of the 12 remaining regular season games, as well as two playoff games. Besides, Tom was named Super Bowl MPV for the fourth time. In the 2017 Super Bowl, the 40-year-old athlete threw for 505 yards, but the team lost to the Philadelphia Eagles.

It is noteworthy that Tom willingly shook hands with the quarterbacks of the rival team after the Super Bowl victories, but he did not do that after a loss. In total, during his sports career Brady was named the Most Valuable Player four times, won 5 Super Bowls, and also threw more touchdown passes than any other quarterback in the NFL playoff history.

From 2004 to 2006, Tom dated American actress Bridget Moynahan. Their son John Edward Thomas Moynahan was born on August 22, 2007, after the couple’s separation.

In December 2006, Brady began dating the Brazilian supermodel, Gisele Bündchen. In 2009, the footballer said in an interview that they met on a blind date, which was organized by the couple’s mutual friend.

On February 26, 2009, Tom and Gisele got married. The ceremony was held in the Catholic Church in Santa Monica, and only close friends were invited. The couple has two children. On December 8, 2009, a son, Benjamin Rein, was born, and on December 5, 2012, his wife gave birth to a daughter, Vivian Lake. The family lives in Brooklyn.

Tom repeatedly appeared as a guest on television shows and voiced himself in the animated series The Simpsons and Family Guy. Besides, the football player has filmed in advertising. In 2007, Brady became a model for the Stetson cologne and later endorsed Uggs, Under Armor sportswear and Glaceau Smartwater.

It is known that the footballer has been friends with US President Donald Trump for more than 16 years and supported his candidacy in the elections. However, when people asked Gisele Bündchen on Instagram whether she had voted for Trump or not, she answered categorically “NO!” Later, Brady said that the wife advised not to speak out on political issues, and he considered it to be the right decision.

Nowadays the football player continues to play for the New England Patriots as a quarterback and keeps fitness which is necessary for the games. Brady weighs 102 kg with a height of 193 cm.

In October 2018, Tom became the first quarterback in the history of American football to reach 200 regular season wins. Besides, Brady threw a 500th career touchdown pass in win. Besides him, only Peyton Manning and Brett Favre could reach such heights.

In 2016, the football player launched the site tb12sports.com, dedicated to sports and healthy diet. The online store sells sportswear, equipment, as well as food additives and products for vegetarians, vegans, and raw food enthusiasts.

Fans can find out about Brady’s life on the official blog of the athlete on Instagram, where he regularly posts photos of his sports achievements and personal life. 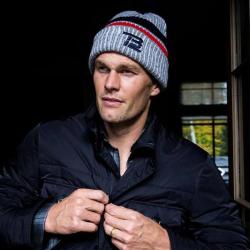