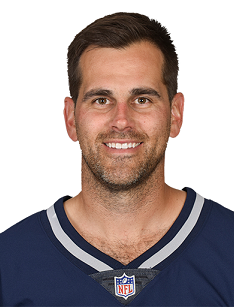 Stephen Gostkowski is a famous American football player. He performs for the New England Patriots of the National Football League. The sportsman was drafted by the Patriots in the fourth round of the 2006 NFL Draft. From early childhood, Stephen demonstrated good results in sports. A strong desire and hard work has led the athlete to huge success in football.

The football star was born in Baton Rouge, Louisiana, USA. He has an older brother, Jeremy, who always supports him. Jeremy has an opinion that Stephen could have been the best at whatever sport he chose because he has always been very a firm and purposeful guy.

In 2002, Stephen finished the Madison Central High School. During his school years, he became a winner of four varsity letters each in football and soccer, and three in baseball. The young player excelled in these three sports and had a fantastic baseball stats.

Stephen had a nickname "Beaver" when he was at the start of his career. Why "Beaver"? The association with this animal was not accidental: Stephen lost two front teeth playing hockey. After that he had replacements with fake teeth, but they were larger than his own teeth, so they stood out from other teeth. The player has one more nickname: "Gotti". It was given to him by Tigers' head coach Tommy West because it was not easy for the team to pronounce his surname correctly.

Stephen studied at the University of Memphis. He performed for the Memphis Tigers football team. He finished his college career setting a school record. The talented player earned first-team All-Conference USA honors in both his junior and senior years and was named Conference USA's Special Teams Player of the Year in 2005.

Stephen was drafted by the New England Patriots in the fourth round of the 2006 NFL Draft. During the 2006 preseason, the player was perfect on field goals and extra points. He made the longest regular-season kick of his young career. In the Wild Card Round of the 2006 postseason against the New York Jets, Gostkowski was perfect on all his kick attempts.

In the AFC Divisional Playoffs against the San Diego Chargers, the sportsman made three of three field goals, including a 50-yard kick that was the longest successful kick in Patriots postseason history.

In the AFC Championship, Stephen again converted all of his kicks, and recorded two touchbacks on kickoffs against the Indianapolis Colts. Gostkowski performed admirably, making all eight of his field goal kicks. In a game against the New York Jets, Stephen broke former Miami Dolphins kicker Uwe von Schamann's record for most extra points converted in a season. Gostkowski went 21 for 24, the third-highest total of any player that year.

In the AFC Championship victory over the San Diego Chargers, he produced high results as well as in Super Bowl XLII against the New York Giants. The player greatly contributed to the Patriots' 19–10 win over the New York Jets, the game that marked Matt Cassel's debut as a starter after a season-ending injury to Tom Brady. In October, Gostkowski was named AFC Special Teams Player of the Month for the first time in his career; he had the highest-scoring game of his NFL career.

In December 2008, the athlete was selected for his first Pro Bowl appearance as the AFC kicker. Next year, in the Patriots' victory over the Buffalo Bills, Tom Brady gave a new nickname to the player; he called him "Meat," referring to Bull Durham.

Gostkowski's contract expired after the 2009 season, and he became a restricted free agent. In 2010, the Patriots signed Gostkowski to a four-year extension, which added four years to his one-year tender contract.

In 2010, Stephen faced some difficulties after getting several injuries. He started the 2010 season, missing three of his first four field-goal attempts over two games. In a game against the Cleveland Browns after suffering a thigh injury, he had to leave the field. When Stephen recovered from his injury, he returned to the team for the first time since his rookie season in 2011.

In the 2014 season, Stephen was among the leaders. He was honored with his third Pro Bowl selection and was selected as a Second-Team All-Pro. He won his first Super Bowl ring when the Patriots defeated the Seattle Seahawks.

In the 2017 regular season, Gostkowski earned 156 points, and it was the second highest total of any player in the NFL, behind only the Los Angeles Rams' Greg Zuerlein. During the 2018 season Gostkowski set a record for most Super Bowl appearances by a kicker.

In April, 2019, the player re-signed with the Patriots on a two-year, $8.5 million contract. According to ESPN on October 2, 2019, as a result of a left hip injury he sustained, the player was placed on injured reserve for the second time in his 14-year career.

The sportsman is a married man. He and his wife Hallie met each other when they both studied in College at the University of Memphis. The couple officially became husband and wife in 2008. Hallie is a nurse at a Boston hospital. The duo lives in Wrentham, Massachusetts. They have three children: two sons (Slayden and Gannon) and a daughter.

Being a notorious sportsman, Stephen draws a lot of attention to his persona. Recently, on Twitter, there was a big discussion of his resemblance with Phil Dunphy (an actor Ty Burrell) from the television mockumentary family sitcom Modern Family. Many people admitted that he is the twin of the actor because they really look pretty much alike.

The net worth of the player is estimated at around $15 million. His salary and career earnings come from his professional career. He also takes part in endorsements of different products. The sportsman appeared in a Pepsi commercial during the 2017 playoffs, joining the ranks of wide receivers Odell Beckham Jr. and Antonio Brown.