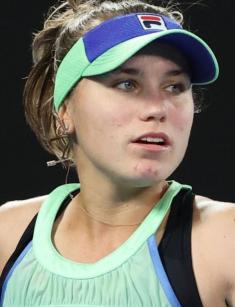 She is a tennis player. Her multiple titles and vivid talent made her one of the most promising players of the time.

Even though Sofia was born in Russia, her parents took her to America right after her birth.

When Sofia was five, she found her passion in tennis. He took her father’s racket and began playing tennis every day. It was hard not to notice her fantastic progress on the court with the local coach. Watching her unique skills and abilities, they had found a possibility of more advanced training. The professional tennis coach recognized her enormous talent and let her focus on tennis more seriously. When she was seven, Sonia began playing professionally. Soon she became the first player in the state. Her nationality is American. As to education, her impressive carrer stats allowed her to get an athletic scholarship.

By the beginning of 2020, she was the 15th in the world ranking. Through the years, the tennis player was lucky to work with several legendary coaches. Her opportunity to play well helped her interact with numerous legendary tennis players. During her junior career, she achieved several titles and represented the States on such occasions as Youth Olympics and Fed Cup Team. As a successful junior tennis player, she attracted much attention and appeared on many covers of magazines.

From 2013 Sofia started her professional career from participating in some low tournaments.

In 2015 she lost her opening match at the big tournament. With her wild card, Sofia appeared at the US Open but lost her first match. Since 2017 she was gradually rising in rankings. In 2018 she was included in Top 50 when she reached the third round on the US Open. The 2019 year was the most prolific for the player. She took three WTA titles. In 2020 she is taking part in the US Open. The rising star made a headline when she defended the first racket in the world, Ashleigh Barty. The victory made her the first player who would play in the final round.

Several athletes made headlines at the beginning of the year. Thus Andy Roddick tweeted the throwback clip following Kenin’s semi-final win at the Australian Open. Ashleigh Barty made a touchy speech at the press conference.

She is a right-hander who plays an aggressive style. Sonya assimilates a diversity of shots during one game. She can hit with her forehand as well as backhand. Moreover, in strategical aims, she adds a slice to her backhand.

The player is active on Instagram. She shares moments of her life. She currently resides in Florida. Even though she is thoroughly focused on her sports career, Sofia is a 21-year-old young lady, who enjoys watching movies, spend time with friends, and listen to music.

As a prominent athlete, Sonya has impressive earnings from endorsements. The rising star signed the contract with a considerable company FILA in 2018. Her idol in professional sport is Serena Williams. Her net worth is estimated at $5 million.