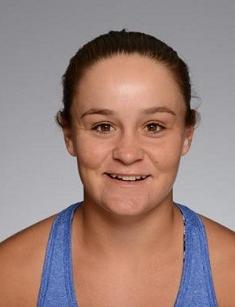 Ashleigh Barty is a top-ranked Australian professional tennis player. During the break from tennis, she tried her hand in cricket. In two years, she felt a strong desire to return and continued her career as a tennis player. Barty became the second highest ranked female tennis player in the world, by winning the title in France Open 2019.

Ashleigh Barty was born in Springfield (a suburb in the City of Ipswich) Queensland, Australia. Her father, Robert Barty, is a government employee. Her mother, Josie Barty, is a radiographer by profession. Ashleigh has two older sisters whose names are Sara and Ali.

Barty is very proud of her background. She identifies as an Indigenous Australian.

She got an education at Woodcrest State College. From an early age, she became interested in tennis. Netball was another game she was passionate about. Her older sisters adored this game and invited Ashleigh to play with them. However, Barty later admitted that they played better than her, so she made up her mind to concentrate on playing tennis. She also was of the opinion that netball was a girls' game.

At the age of four, Barty exercised at the West Brisbane Tennis Centre with the coach Jim Joyce. He remarked that firstly he doubted in training Barty, thinking that Barty was too young for serious work. But Joyce was so impressed by her coordination and good focus, that he ceased hesitating. They both remembered their first training when he threw the first ball to her, and her reaction was so fast that she hit it back immediately. After that moment, Joyce was one hundred percent certain in a huge potential of a young player.

Being nine years old, a girl competed with players who were much older than her.

Barty showed her first results in tennis in a career-high International Tennis Federation (ITF) world junior ranking of No.2. In 2009, at the age of 13, Ashleigh began playing on the ITF Junior Circuit. She took her first title at the Grade 4 Australian International.

In 2011, Barty competed in her first junior Grand Slam event at the Australian Open, but she lost the match. However, she returned from the defeat by winning both the singles and doubles events at two Grade 1 events. The first was the Sarawak Chief Minister's Cup in Malaysia and the second was the Belgian International Junior Championships.

After a second round loss at the 2011 French Open, at the age of fifteen, Barty took her only Grand Slam title at Wimbledon. She was the second Australian player to win the girls' singles event after Debbie Freeman in 1980. And she was the first Australian girl to win any junior Grand Slam singles title since Jelena Dokic at the 1998 US Open.

In the last Grand Slam tournament of the year 2011, Barty showed another strong singles result, when she lost to top player Caroline Garcia in the semifinals of the US Open.

Barty was the winner of two Grade 1 titles in doubles. She owned the first title at Roehampton and the the other at the Canadian Open. Ashleigh finished the season by winning the Junior Fed Cup for Australia with teammate Belinda Woolcock. She only played in one junior tournament the following year. She was second in both singles and doubles at the Torneo International in Italy.

The professional career of a young girl started in April, 2010, when Ashleigh was 14 years old. She demonstrated her singles and doubles draw debuts during the Women's Tennis Association Tour in early 2012. She became the youngest Grand Slam finalist since Tatiana Golovin after she reached Australian Open finals in doubles.

Ashleigh and her partner Casey Dellacqua, an Australian tennis player, were the first duo to reach an Australian Open women's doubles final since Evonne Goolagong and Helen Gourlay in 1977.

Barty finished the 2013 season as the World No. 12 in the doubles rankings.

She and her regular partner Dellacqua became the winners of their second title together at the Internationaux de Strasbourg during the clay season.

In 2014, Ashleigh decided to take a break from tennis. She declared about her wish to experience life “as a normal teenager.” Her relatives and coaches supported her decision to take a pause and refresh mentally. But despite the break in tennis, the Ashleigh did not abandon sports in general: she became interested in cricket.

Barty showed good results in this game with her skill to react very quickly, according to Andy Richards' words, the coach of the Queensland Fire. Barty began training with the Queensland Fire, and also started playing for the Western Suburbs District Cricket Club. She played in 13 matches for Western Suburbs, and they eventually won the leagues' grand final. Barty also signed with the Brisbane Heat for the inaugural Women's Big Bash League (WBBL) Twenty season.

In February, 2016, the player returned to tennis, having realized that she missed the game. She began training with the coach Craig Tyzzer. Barty was back to the WTA Tour qualifying for the Nottingham Open. During that time, she got injured and had to stop trainings to recover.

In 2017, Barty reunited with Dellacqua as her regular doubles partner and finished the year inside the top 20 in both rankings.

She and Dellacqua were the first Australian women's doubles team to reach all four Grand Slam finals. They became the winners of second Birmingham Classic title.

Later in September, Barty produced her best result of the season by reaching a Premier 5 final at the Wuhan Open. During the tournament, she defeated three top ten players: Johanna Konta, Karolína Plíšková, and Jeļena Ostapenko. Barty moved forward by winning both of her matches: the first against Anastasia Pavlyuchenkova and the second against Angelique Kerber. She was eliminated from the tournament by CoCo Vandeweghe, an American tennis player.

In 2018, Ashleigh won the Nottingham Open on the grass. It was her second career WTA title.

By the end of the 2018 season, Barty attempted to defend her previous year's finals appearance at the Wuhan Open. Although she was the only seeded player to make the semifinals, she fell one match short against Aryna Sabalenka.

The biggest title of her career was 2018 WTA Elite Trophy after defeating Wang Qiang in the final. At the end of the season she was ranking No. 15 in the world.

She and her partner Dellacqua reached the third round at the Australian Open, and that was their last match played together.

In the union with Coco Vandeweghe, Ashleigh went on to win the 2018 Miami Open.

She then partnered with Demi Schuurs and won 2018 Italian Open and 2018 Canadian Open.

The sportswoman began the 2019 season at the Sydney International in a head to head competition with Petra Kvitova and was eliminated by her. At the Australian Open, she turned to be the first Australian to reach that stage of the tournament for over a decade after she defeated Maria Sharapova in the fourth round. Barty next competed at the Indian Wells Open, defeating Tatjana Maria and Jennifer Brady.

Barty then traveled to compete at the Miami Open. She advanced to her first Premier Mandatory quarter final after winning world No. 8 Kiki Bertens. She took her first career Premier 5 title defeating Karolina Pliskova and entering the top 10 list.

The player was pretty successful at the start of the clay court season. She reached the quarterfinals in Madrid and the third round in Rome, partnering Victoria Azarenka, the Belarusian-American professional tennis player.

In a post-match interview, Ashleigh Barty expressed her feelings after the victory. She was thankful for her team and everybody who contributed to her success and becoming the first Australian woman to win the French Open in 46 years. Her victory at the tournament ranked her to female tennis player number two in the world rankings.

Ashleigh Barty is a right-handed player. Barty is an old-school tennis player, who uses an equal mix of offense and defense. The force of her hits is not so hard as her competitors', but she prefers to use variations in pace and spin. She says it helps to unhinge her opponents.

Barty often comes to the net. One of her tactics is to use the backhand slice, keeping the ball low off that wing. Thus, she can detect faults from her opposers.

Her biggest strength is the court sense. She knows how to outguess her opponents, using a perfect strategy.

Ashleigh Barty's height is 5 feet 5 inch, but her small stature was never a barrier to big wins. She is confident in her technique and is sure that she can trust it. Her main goal was to become stronger and more professional.

At present, Ashleigh Barty is unmarried. But she is known to be in a relationship with golfer Gary Kissick.

During the two year break from her tennis career, Ashleigh enjoyed fishing and reading. Having more free time, she built a new house close to her family.

The tennis player is interested in football and supports several sports teams including the Richmond Football Club in the Australian Football League, and some others.

Barty is very proud of her background, so she became the National Indigenous Tennis Ambassador for Tennis Australia, the organization that contributes in the game of tennis and holds many tournaments in Australia. The sportswoman enjoys being an ambassador and is excited to be engaged in the promotion of indigenous people participation in tennis.

All her earnings go from her professional tennis career. The net worth of Ashleigh is estimated at $4 million.