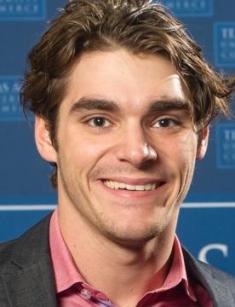 Roy Frank Mitte III, professionally known as RJ Mite, is an American actor who earned his fame thanks to the role of the main character’s disabled son in the TV series Breaking Bad.

Roy was born in Jackson, Mississippi, on August 21, 1992. There were some problems during childbirth, and doctors had to have urgent surgery; the baby’s brain was damaged due to the shortage of oxygen. As a result, the boy’s musculoskeletal system was hurt; he was diagnosed with cerebral palsy.

When the biological parents learned the news, they gave him up for adoption. Roy Frank Mitte Jr. and Dyna Mitte adopted him but divorced later; only the mother brought up her son. She taught him to forget the words “I can’t” or “I won’t”. Little by little, the boy began to walk – doctors had put casts on his legs to have them straightened. Initially, little Roy used crutches; he does not need them today, for exercises helped him get rid of them. Only some uncontrolled movements of an arm remained; they are not much notable for those who do not know the young man’s story.

Later, the mother married again and gave birth to Roy’s sister, Lacianne Carriere; she is eleven years younger. Two years later, a new misfortune followed: Dyna had a car crash and stayed paralyzed for six years. The 13-year-old boy had to take responsibility for his family and earn: he did everything that could bring money.

Cinematography was one of the options. When Lacianne was offered to participate in several commercial campaigns, the family moved to Los Angeles. RJ followed his sister’s example and took up acting classes as well.

The young actor appeared in an episode of the sitcom Hannah Montana on Disney; his name was not credited, though. Further on, Mitte auditioned for a new drama series Breaking Bad.

The project creators wanted a teenager who could move on crutches naturally. Interestingly, they did not even realize at first that Roy used to be actually disabled and spent years learning how to walk without crutches. RJ showed the physical problems and speech difficulties that people with cerebral palsy had and received the role of Walter White, Jr. By the way, this character’s disease was more severe than that of the actor’s; the young man had to be courageous to return to the past he wanted to forget.

The drama Breaking Bad was aired for five years and gained many nominations for prestigious awards. The project became iconic all over the world.

RJ Mitte expressed his hope that this part would change the attitude to the diseased – and their own vision, too. The actor got numerous letters from gracious young people who told him their stories; girls showed their fondness of the artist as well.

Following the success, Mitte participated in the western Vegas, the short horror Stump, and the teen series Switched at Birth. The thriller House of Last Things was starry for him. In 2015-2016, one could see the artist in the crime movie Dixieland and the social drama Who’s Driving Doug. The latter brought the part of a student hiring a driver; he can hardly imagine how his life is going to change.

Roy is equally fond of producing; he worked on the documentary Vanished: The Tara Calico Story about the mysterious disappearance of a young woman in the late 1980s.

The young man is not married; he mentioned in his interviews that steady relationships were not his priority. RJ Mitte financially supports his mother and sister but says his earnings are far from those people usually think about when it comes to Hollywood stars.

Similar to many of his colleagues, the artist does not like to share the details about his personal life. In October 2017, the paparazzi noticed him in a jewelry store – he was buying a ring with a diamond, which was probably intended for the engagement. Mitte gave no comments and made it clear: things would be revealed at the right time.

Fans expected to see the artist’s girlfriend on Instagram, but it did not happen. Today, he posts pictures from vacation, museums, and festivals; the content is intended to be mused upon.

RJ is a popular model. In 2014, the young man was chosen as a spokesperson for Gap and even appeared on the runway to present its new collection. He seems to be more than suitable for this job: bright brown eyes, thick dark hair, and a radiant, sincere smile. Mitte’s height is 5.97 feet (182 cm.); his weight is about 176 lbs. (80 kg.).

In 2015, Neurology Now magazine published the artist’s picture on its cover. One could read about his life and the ways to minimize the inborn disorder outcomes.

RJ Mitte has first-hand experience about how difficult it was for a non-standard actor to star in a movie. He works to improve the situation in this sphere and presents the United Cerebral Palsy non-profit organization.

Besides, fans can see his favorite in music videos of Hollywood Undead, Steel Panther, Nothing But Thieves, and 3 Doors Down.

In 2017, the horror The Recall was premiered; RJ Mitte and Wesley Snipes starred in the project. As the story runs, five friends decide to spend their weekend in a house near a lake; this is when aliens attack our planet. Fortunately, the company meets a hunter who is not going to give up.

The same year, Mitte appeared in The Celebrity Island with Bear Grylls. The famous TV personality left the participants in a distanced island in the Pacific Ocean; they had only video cameras, clothes, and simple tools. The show was immensely popular and broke many records.

2018 was marked with a secondary part in the series This Close and the lead role in Sebastián Hofmann’s drama Time Share. All the Little Things We Kill and Triumph starring the actor will be presented to the audience soon.