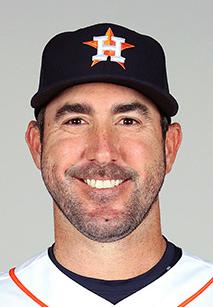 Justin Verlander is a popular American professional baseball player, who performs for the Houston Astros of Major League Baseball. He has also played in MLB for the Detroit Tigers. The sportsman is regarded as an ace player among the pitching leaders, who has achieved many distinguished rankings throughout his career. Let's see how the talented athlete managed to do it.

Justin was born in Manakin-Sabot, Virginia, USA. He received a decent upbringing. He is very thankful to his parents for raising him and his younger brother, Ben Verlander, who also did well in sports.

Justin got an education at the Old Dominion University. He played college baseball for the Monarchs. The player was praised by many coaches for his skills in sports. During his youth, he was distinguished by his talents in baseball among the other players. For example, in 2003, he contributed to the United States national team win at the Pan American Games.

When the player was young, his father decided to send him to The Richmond Baseball Academy. He wanted the son to get education there. The sportsman dashingly reached high results playing baseball. He finished his career as the all-time strikeout leader in Old Dominion, the CAA.

The professional career of the sportsman started in 2004. Justin signed a contract with the Detroit Tigers in the MLB Draft. The talented player debuted in in July, 2005. Firstly, he played for the Lakeland Flying Tigers and the Erie SeaWolves, and then he joined the SeaWolves team.

In summer, 2005, Verlander appeared in a game against the Cleveland Indians. However, he was placed on the disabled list after getting an injury. But the player earned respect and glory for his incredible performances in the field, and was recognized as a Florida State League all–star and was Detroit's highest-rated athlete.

In 2006, the sportsman became the first rookie pitcher in the history of the game: he was the winner of ten games.

Verlander's success continued in 2007. During the year 2007, he was a first no-hitter and All-Star Game player. However, he had some losses in 2008, so this year turned out to be not so successful for him.

Justin had high scores in the 2009 season: his 19 wins led the majors that season. Later, the sportsman confirmed a five-year contract extension with the Tigers.

In April, 2011, Justin amazingly performed in the match against the White Sox. In summer, he was in his fourth All-Star team, but he didn't take part in the game due to his schedule. A victory against the Cleveland Indians made him the first Tiger since Bill Gullickson in 1991.

Before the 2013 season, Justin signed an agreement on a seven-year contract, which made him the highest-paid pitcher in MLB history. Surprisingly, the baseball player had lower results in 2013, in comparison with previous years.

In 2014, Justin had core muscle surgery. Tiger manager Brad Ausmus said that the player would make his seventh consecutive opening-day start on March 31. Verlander got the first two hits of his major league career during the win over the San Diego Padres. However, This year, Justin was not named to the AL All-Star team for the first time since 2008, snapping a streak of five straight appearances.

At the beginning of the 2015 season, he was put on the disabled list due to a right triceps strain. So he ended his streak of seven consecutive Opening Day starts for the Tigers. He managed to improve his results in 2016, when he finished the season, leading the American League for the fourth time in his career.

After the Houston Astros trade for the pitcher in 2017, Justin made his Astros debut against the Seattle Mariners. He also won the AL West division-clinching game for the Astros. The team chose to skip Verlander's final scheduled start and offered him to start the first game of the ALDS.

After a couple of seasons full of injuries, many believed Verlander would not return to his condition. However, the athlete quickly got in shape and surprised everyone with high results.

In March, 2018, the player was named the opening day starter for the Astros. Unlike in previous seasons, he began masterfully in 2018, leading an Astros rotation that began the season as the most dominant in the major leagues. He was named the AL Player of the Week on April 17. In August, Justin appeared in a crucial victory over the Oakland Athletics. It was Verlander's 200th career win.

In the 2018 AL Cy Young Award voting, Verlander finished second to Blake Snell of the Tampa Bay Rays by 15 points. He received 13 first-place votes to Snell's 17. This was Verlander's third Cy Young runner-up finish, and sixth time finishing in the top five.

In March, 2019, the player signed a two-year contract extension. In September 28, the player had his final start of the 2019 regular season.

With all his career records, Justin had all chances to be included in the Hall of Fame. But, as for now, he is not yet there.

Justin is a non-conflict guy; he never had problems with his teammates. However, he had some collisions with a Detroit Free Press beat reporter Anthony Fenech. Justin wrote in his Twitter that he didn't want to speak to Fenech because of a history of "unethical behavior." In a column published by sports editor Chris Thomas, the Free Press called for MLB to punish the Astros as it demonstrated on how Fenech and Justin's relationship began to worsen.

After concluding an interview with the sportsman in August 2017, Fenech, Verlander and Al Kaline had a "casual" conversation. Fenech tweeted two pieces from their talk. The next day, Justin felt unhappy with Fenech publicizing the conversation, and expressed his displeasure, complaining of such ridiculous behavior.

Justin Verlander is a married man. His wife, Kate Upton, is model-actress. They started dating in early 2014, and in 2016 the couple got engaged. In November, 2017, the two married in a medieval church in Tuscany, Italy. In summer, 2018, the couple announced that Kate was pregnant with their first baby. Justin and Kate have a daughter, Genevieve. The parents admitted that it wasn't easy for them to choose the baby name and they spent a lot of time debating.

Genevieve was given “Upton” as her middle name and “Verlander” as her last name, representing both her parents. During her pregnancy, Kate shared her secrets of being in good shape, in the interviews, she spoke a lot about her diet, physical activities and the support of her husband. During the off-season, Verlander's family lives in Lakeland, Florida.

The net worth of the sportsman is estimated at $80 million. His career earnings mainly come from sports. He’s been fortunate in signing some of the biggest contracts in the history of the league. He also has had many bonuses and endorsements as well.

The sportsman does charity work. In 2016, he started the foundation for veterans of the United States military. The earnings helped Houston recover from Hurricane Harvey in 2017. The player also supports local charities and the Red Cross.