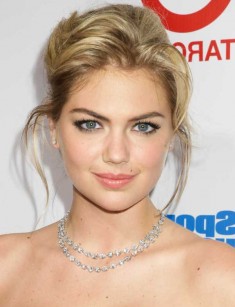 Kate Upton is a popular American model and actress. Kate presented herself in contrast to other models and competed with top models of "heroin chic" era. The girl has womanly, even curvy shapes and she is especially demanded at underwear displays and in advertising.

The blond girl called Kate Upton was born on the 10th of June 1992 in the city of St. Joseph, Michigan. Her full name is Katherine Elizabeth Upton.

Though, the actress spent her childhood in the sunny city of Melbourne in Florida. The girl's father Jeff Upton works as the director of sports school, and her mother Shelley Upton was the champion in tennis of Texas. The girl grew up with her three brothers. Katherine’s uncle, Fred Upton, holds a post of the congressman of Michigan Republican Party.

Kate Upton studied at Holy Trinity Episcopal Academy. Already at teenage age, the girl was fond of equestrian sport. She participated in horse riding championships of the national level and received several titles. Kate was a member of the well-known American Paint Horse Association.

Since early years the blond blue-eyed girl was designated to have a model career.

The young beauty, unlike the majority of the models, didn’t have to haunt the threshold of the model agencies. Good luck had smiled at her from the first try. Kate Upton had got her first casting when she was 16 years. The model agency "Elite Model Management" which is situated in Miami concluded the contract with the girl.

A little bit later the girl signed the contract with the prestigious "IMG Models" agency. Such supermodels as Heidi Klum, Cindy Crawford, Kate Moss and Tyra Banks had been cooperating with this model agency.

In such a way impetuous and exciting model career of Kate Upton had begun. Soon the beautiful model began to cooperate with the most eminent and popular brands. In 2010 she became the face of the advertising campaign of Guess brand clothes. In a year Kate was called the breakthrough of the year in the model world. Soon she began to appear topless on the pages of "Esquire" and "Comple" magazines, the last one even called her "The Woman of Summer".

But to be fair it's necessary to say that beauty of the American model hadn’t enchanted all and everybody. Some people get squeamish and scrunch up their faces, looking at her too curved forms. It’s true that Kate Upton’s waist is far from being thin. But she isn’t a "fat pig" at all as she was called by some skinny models which are accepted to be called "hangers".

Her trainer David Kirsch, who is entrusted to help many Hollywood stars to keep in shape, stood up for his mentee. He said that he decided not to exhaust the model with diets because she was the quintessence of femininity, health, and freshness. Moreover, Kirsch told that his mentee practiced boxing and kickboxing during 2-2,5 hours 4 times a week.

In 2011 the model became truly famous, the girl came to be one of the angels of Victoria's Secret brand. Now, Kate’s figure and her breast can be seen publicly. The well-known brand advertises magnificent lingerie.

The same year "Esquire" glossy magazine entitled Upton as "The Woman of Summer".

Kate Upton’s breast size is the 4th and it’s natural. The gorgeous model is 178 centimeters high, at the same time her parameters are really tempting: 87-63-90 with the weight of 63 kilos.

But the joy of this successful contract with the legendary brand was soon overshadowed: in 2011 the provocative video with Kate's participation where the girl was fooling around and dancing hip-hop of "Dougie" at the match of Los Angeles Clippers appeared on the web. The amateur video is called - "The Dougie". During the first day, this video in which the model dances in a funny way on the tribune during the basketball match collected more than seven hundred thousand viewings, having made the girl the star of the world wide web.

Upton decided that the best way out from this situation would be to accept the incident not as an annoying fact, but as an amusing adventure. The girl not only pretended that she had enjoyed the video which had been posted on the web but also uploaded her new video of the dance in a bikini on the web. The second video had beaten the results of the previous video and gained 750 thousand viewings per day.

Kate Upton becomes more and more popular, participates in fashion displays, takes part in advertising, appears on the covers of fashion magazines. Natural beauty and charm of the girl attract both fashion designers and photographers.

In 2012 the beauty concluded the contract with the Beach Bunny brand and appeared in advertising of bikini and wedding dresses with her womanly figure.

In spite of the fact that Kate is usually invited to take part in advertising of swimsuits and bikini or to participate in the photoshoots of "Playboy" and "Esquire" magazines, in her further plans, the girl wants to conquer Hollywood as an actress.

The girl got used to the attention of video cameras: Kate Upton is a regular guest at popular programs of the late-night-show and talk show format. The model participated in the broadcasts "Good Morning America", "Saturday Night Live", "Entertainment Tonight" and other cult American shows which were started in 70-80-s of the previous century and since then continue to draw the attention of the audience. Moreover, the model became the guest of the author's shows "Late Show with David Letterman", "Jimmy Kimmel Live!", "Ellen: The Ellen DeGeneres Show" and in a dozen other author’s shows.

The cinematic biography of Kate Upton had begun in 2011. For today the actress managed to appear on the big screen in six movies.

In 2011 Kate acted in the picture "Tower Heist" where she had played the role of Mr. Hightower's mistress, in 2012 she appeared in the movie "The Three Stooges" as Sister Bernice.

The year 2014 became a breakthrough for Kate in cinematography. This year there was premiered the picture "The Other Woman" where Kate Upton played the major role of Amber.

The same year the model took part in the music video of "Lady Antebellum" group on the composition of "Bartender" and also she performed the role of Athena in advertising of the popular strategic mobile game "Game of War".

In August 2014 Kate Upton became the participant of the terrible scandal. The hackers cracked girl’s iCloud Apple therefore 25 intimate photos of Kate and her boyfriend which appeared publicly on the web.

In the photos, the couple was completely naked and photographed from different angles. They hadn’t managed to find out, who had leaked this photos on the web and who had stolen them from the home archive.

Hackers didn't direct the attack personally against Upton. Along with this breaking the hackers posted on the web the photos of other naked actresses, singers, and models.

This scandal only increased Kate's popularity. This year the "FHM" magazine placed the model on the 18th place in the list of the sexiest women of the world, and "People" magazine called Upton the sexiest woman of the year.

In her life, Kate Upton had a short love affair with the Ukrainian dancer Maksim Chmerkovskiy. This popular couple had been together for six months. But the most sexual body of Victoria's Secret doesn't guarantee happiness in personal life. Chmerkovskiy left the model, and as it turned out the dancer was the initiator of their parting.

But ex-lovers had broken up peacefully. They talk well about each other. They explain their separation with the difference of working schedules and impossibility to spend much time together. The representatives of the model officially announced a parting of the couple in December 2013.

And at the beginning of 2014, a new sexual photo shoot with Kate Upton where the girl was demonstrating her seductive figure appeared in "V Magazine". The famous duet of the photographers Inez van Lamsweerde and Vinoodh Matadin became the authors of this photoshoot. Kate Upton's admirers are sure that the dancer, having seen the new photos of the beauty, will be regretting his reckless action.

The angel of Victoria's Secret likes to have a rest with her family at home. Kate Upton loves Japanese cuisine and quite often visits her favorite "Nobu" restaurant to eat some sushi.

People talk about the love affair of the model with the rapper Kanye West and the football player Mark Sanchez. But nothing is known about Kate’s present relations. Buxom beauty doesn't like to discuss such private subjects. But the model openly and regularly covers her everyday life on her own verified page on Instagram where Upton has 4,8 million subscribers.

In 2016 the model became the guest of the talk show of Chelsea Handler under the title "Chelsea".

In March 2017 Kate appeared in the tragicomedy "The Disaster Artist". The picture told about the creation of another real-life movie "The Room" which the critics called the standard of dull cinema right after its release in 2003.

Also in March Upton played the role of Talia in the comedy "Wild Man".

The actress isn't going to be satisfied with her achievements and she dreams to firm her positions as a model in Hollywood. 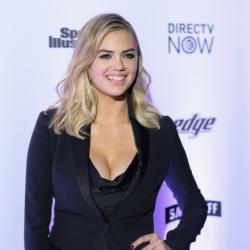