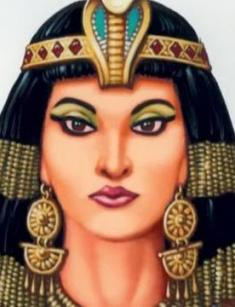 Cleopatra VII Philopato is an Egyptian ruler whose life awakens much interest today. Although the woman could not be called pretty, she earned the love of two Roman military leaders: Julius Caesar and Mark Antony. This love triangle is popular in the modern culture: directors create movies, and writers reflect on the femme fatal’s story in their books.

Cleopatra was born on November 2, 69 BC. The exact birthplace is unknown, but researchers believe it was Alexandria, the cultural center of the ancient world. Unlike most people think, the pharaoh had no Egyptian roots: she came from the Ptolemaic dynasty founded by one of Alexander the Great’s Diadochi, Ptolemy I. Thus, the woman’s origin was Greek.

There is no information about Cleopatra’s childhood and youth. Perhaps, she spent much time reading books in the Alexandrian library – later, many sources emphasized her talent to talk about philosophy, give reasonable arguments, and play various musical instruments. Besides, the leader spoke eight foreign languages.

It is a surprising fact: the ancient Greeks did not care much about children’s education, especially if they were girls. For example, Cleopatra’s sister, Berenice, was her polar opposite: she was quite lazy and silly and liked entertainments.

In 58-55 BC, Cleopatra had to see her father, Ptolemy XII Auletes, expelled from the country; his daughter Berenice grabbed the power. According to the ancient Greek historian Strabo, she was the only legitimate child of Ptolemy; this information gives some reason to believe that Cleopatra’s mother was a concubine.

Later, the exiled ruler returned to the throne thanks to the Romans and Aulus Gabinius. Ptolemy XII lacked leadership skills, though: repression, delinquent behavior of citizens, and cold-blood murders were routine. These events burned in Cleopatra’s memory: she often remembered her father’s reckless actions; he was the person whose mistakes served as a valuable lesson for the woman.

The ruler of Egypt

When Ptolemy XII Auletes got back his rightful throne, Berenice was decapitated. The tradition required to keep the sacred blood of the royal family, and 17 or 18-year-old Cleopatra married her nine or ten-year-old brother, Ptolemy XIII, beginning to rule the country after her father’s death. Still, it was only a formality: her power was cyclic, and women could play only secondary roles at that period. Cleopatra was known as Thea Philopator, meaning “the goddess who loved her father”.

Romans were eager to take Egypt. Although 96% of its territory was deserted, its fertile valleys originated the big civilization. The Roman Empire was one of the most significant forces in the world; some exterior lands of Ta-Kemet belonged to it, but Egypt was not conquered fully. The country was dependent; its debts worsened the hapless condition.

The first years were challenging for Cleopatra: the Nile’s flooding was weak, and two years of bad harvest followed. The situation was even more complicated when the brother and the sister began their feud. The pharaoh removed her husband from the state affairs for a while, but when Ptolemy XIII grew up, he could not accept it. With the assistance of his mentor and the regent Pothinus, the young man organized a mutiny; people were told that Cleopatra stopped listening to the reigning trio and wanted to dethrone her younger brother.

The woman fled to Syria; this decision saved her life. As an outcast, she was dreaming of having her power back. At his period, the dictator and military general Gaius Julius Caesar went to Alexandria to find his archenemy Pompey, who escaped to Egypt after the unsuccessful Battle of Pharsalus. Caesar could not get even with him – when the emperor arrived in the Nile Valley, Pompey had already been killed.

The general had to stay in Alexandria for a while – the weather conditions were unfavorable for a long journey back. The Roman leader used this time for collecting Ptolemy XII Auletes’s debts from his successor (10 million of denarius) and participated in the conflict between Ptolemy’s and Cleopatra’s supporters; he hoped to get some benefit for himself and his people.

In her turn, Cleopatra needed to earn Caesar’s trust. According to the legend, she entered the palace secretly: a slave took her there as a present; she was covered in a carpet. Julius was charmed by the young queen’s beauty and took her side.

However, Caesar’s army was small: 3200 foot soldiers and 800 cavaliers. Ptolemy XIII took the chance, and people supported him; the Roman leader had to hide. He entered Egypt again in winter and destroyed Ptolemy’s army; the enemy drowned in the Nile. Thus, Cleopatra became the pharaoh again and ruled with infant Ptolemy IV.

Legends are told about Cleopatra’s personal life. Many famous actresses, such as Elizabeth Taylor (Cleopatra, 1963) and Monica Bellucci (Asterix & Obelix: Mission Cleopatra, 2002) personified this great woman. Many people imagine her as an incredible beauty capable of winning any man’s heart from the first sight. In fact, there was nothing special in the Egyptian ruler’s appearance.

Nobody knows how the woman looked, but some statues, coins, and the bust from Cherchell, Algeria, give some hints: a big nose and narrow chin. However, some researchers believe the bust portrait Cleopatra’s daughter, Selene II. Anyway, the pharaoh was intelligent and charming; she could make men adore her.

Cleopatra was not always noble – she could be cruel sometimes. For instance, she often tested poisons on prisoners and watched them die to understand how dangerous substances influenced them.

Cleopatra was said to be an amorous person. Indeed, men and women in Egypt and Rome could have many affairs; kings and queens had several lovers. According to legends, some crazy people could give up their lives for a night with the Nile siren: their heads would be put outside in the morning as trophies.

There are many beautiful love stories about Cleopatra and Julius Caesar. It was the love from the first sight; the Roman general forgot his lover Servilia for the 21-year-old beauty from Egypt.

When Ptolemy XIII was destroyed, Cleopatra and Caesar had an amusement journey across the Nile; 400 ships accompanied them. The couple’s son Ptolemy Caesar (Caesarion) was born on June 23, 47 BC.

The relationship with Cleopatra brought much trouble to the Roman leader. The Egyptian queen, her brother, and son arrived in the capital of the empire with a prominent escort, but everybody disliked Cleopatra because of her haughtiness; they did not mention her name. For example, Cicero wrote in his manuscript: “I hate that queen!”.

Those who were close to Caesar were sure: the dictator was going to become a new pharaoh and make Alexandria the capital of the empire. The Romans did not like this scenario; it was one of the reasons that caused the plot against Julius. Caesar was murdered on March 15, 44 BC. A civil war began; Cleopatra did not interfere. Finally, Mark Antony became the leader of the East Rome.

He was going to accuse Cleopatra of plotting against Caesar, but the woman knew about his amorous nature and vanity. She acted skillfully and organized the luxurious first meeting on a gold ship, wearing a costume of Aphrodite. The new romance lasted for ten years; the twins Alexander Helios and Cleopatra Selene II were born in 40 BC. The third child, the son Ptolemy Philadelphus was born in fall 36 BC.

There have been many theories and fantasies about Cleopatra’s death; it is hardly possible to restore the events as they happened. Plutarch’s version is common; many writers created their romantic books based on this interpretation.

The legal successor of the Roman throne Augustus came to Rome in spring; the locals welcomed him enthusiastically, but the army and Caesar’s supporters stood for Mark Antony. The Final War of the Roman Republic escalated; Augustus won it and headed to Alexandria. Mark received the fake news about Cleopatra’s death; he could not bear the pain and pierced himself with a sword. At that moment, Cleopatra and her servants locked themselves in a tomb; this is where dying Mark was delivered.

The man died in his lover’s arms. Cleopatra wanted to kill herself with a dagger publicly but pulled herself together and started negotiating with Augustus’s representatives. She was going to charm Octavian to restore the country, but all the attempts were futile.

The death of Antony was a severe blow for Cleopatra. She was depressed and refused to eat, spending all the time in the bed. Cornelius Dolabella informed the widow she would be sent to Rome for Augustus’s triumph.

August was going to follow the ancient Roman tradition to celebrate the victory over Egypt and make Cleopatra walk in chains, like a slave. However, the woman escaped the shame: she was bitten by a snake from a pot with figs. It was a peaceful, painless death.

The location of Cleopatra’s mummy is unknown. The pharaoh and her dear Mark Antony are probably buried near Taposiris Magna (Abusir, Egypt).

In the modern culture