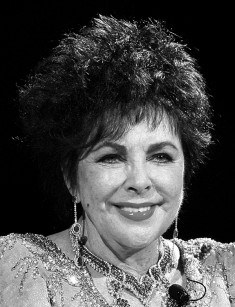 Elizabeth Rosemond Taylor was born on February 27, 1932, in London. Her parents were the American actors who worked in Great Britain. In 1939, when the war in Europe began, they came back home to Los Angeles where their daughter had many opportunities.

In 1942, Universal offered 10-year-old Liz to play in the movie There’s One Born Every Minute; the girl played Gloria Twine. This project became the first work in the great actress’s filmography. The next two years, she collaborated with the companies which are the main Hollywood studios today: MGM (Lassie Come Home) and 20th Century Fox (Jane Eyre with Orson Welles).

In 1950, Taylor got her first “adult” role in the movie Father of the Bride; in 1951, her work in A Place in the Sun made critics talk about her.

At that time, Elizabeth showed her difficult character: she did not like many movies where she starred, and the company’s overwhelming control irritated her. Taylor even wanted to cancel the agreement with MGM and finish her career which had hardly begun. Fortunately, the situation improved soon. In the mid-1950s, Elizabeth Taylor started gaining lead roles in significant movies.

The movies based on Tennessee Williams’s plays Cat on a Hot Tin Roof (1958) and Suddenly, Last Summer (1959) brought the woman the broad recognition. The scene with Maggie "the Cat" Pollitt where she was lying in a silk nightgown was compared with the moment in the iconic movie The Seven Year Itch where Marilyn Monroe’s character’s skirt was flying because of the air in the New York subway ventilation. Besides, Elizabeth Taylor won her first significant prize: the Golden Globe Award for Best Actress.

The next year was also successful: Elizabeth won her first Academy Award for her role in BUtterfield, 8; it was the last time she collaborated with MGM. Taylor was going to be globally famous.

1963 was rich in events in the world of cinematography. The comedy It's a Mad, Mad, Mad, Mad World came out; Alfred Hitchcock presented The Birds; Ingmar Bergman had the movie The Silence released. The same year, Cleopatra with Elizabeth Taylor came out. Her earnings were unprecedented: she received $1 million. The movie turned out to be so expensive that its production paid off only four years later when TV companies got the screening rights. This work turned over a new leaf in the actress’s career. She became a star and conquered millions of viewers by her rare beauty and bright, talented acting.

The role of Martha in Who’s Afraid of Virginia Woolf? brought the actress her second Academy Award. She had to make a sacrifice and put on much weight; later, it was difficult for her to become fit again. This project was the last significant role of the actress. She continued to appear in other projects, but no prominent success followed. CIS citizens would probably remember the movie The Blue Bird (1976) based on Maurice Maeterlinck’s play created by Lenfilm and 20th Century Fox; Taylor played several characters at the same time.

In the 1980s, Elizabeth Taylor appeared in the movies and series known to few people; she took up social work and business. For instance, she was the first Hollywood star who presented the perfume line under her name. Taylor paid much attention to fighting HIV and founded the American Foundation for AIDS Research and the Elizabeth Taylor AIDS Foundation. She spent much time doing charity work; in 2001, she received the Presidential Citizens Medal.

For the very last time, Elizabeth Taylor appeared on the big screen in 1994 in The Flintstones which was not popular. Besides, the only world that Maggie Simpson ever pronounced was voiced by Elizabeth Taylor.

In 1997, the actress won the Screen Actors' Guild Lifetime Achievement Award for Humanitarian service. In 2007, she went out for the last time: it was the Paramount Pictures event about HIV/AIDS problems.

Elizabeth Taylor’s personal life has attracted much attention – perhaps, even more than her works. It is not surprising: the woman with such a unique appearance and career achievements could not live a boring life of an ordinary person.

The actress had a rare genetic mutation: distichiasis; in other words, she had two lines of lashes which gave her eyes and look the particular beauty and expressiveness. Moreover, many people believe her eye color was purple; it was the exceptional case.

When the actress was 23, 18-year-old Nicky Hilton married her. The successor to the large empire, Hilton was a passionate lover but a worthless husband: he could drink too much, carouse, and even hit his pregnant wife. The marriage ended tragically: Elizabeth miscarried.

Michael Wilding was old enough to be Taylor’s father; Elizabeth took him from his family. That marriage should have been perfect. The woman gave birth to two children, yet the couple split up.

Liz was not depressed for a long time. Three days later, she married the producer Michael Todd who was 24 years older than she. The actress remembered that marriage as the happiest one; she loved Michael genuinely. She could have been with him on board the place on March 22, 1958 (the plane crashed), but she felt sick that day.

Michael’s friend Eddie Fisher showed up in the right place at the right time: he supported the grieving widow and later became her husband for five years.

The work on Cleopatra changed everything. Richard Burton who played Mark Antony became the fatal man in Elizabeth Taylor’s life. As soon as he confirmed the affair publicly and added he was not going to divorce his wife, Elizabeth had a suicide attempt. Many people believed Burton just wanted some of Taylor’s glory. However, the man fell in love with Taylor and showered her with presents throughout their marriage.

High emotions and passion were present in the family for almost ten years, but it all stopped eventually. Burton began to drink, and the box office of the couple’s movies left much to be desired. The divorce followed. The next year, Taylor and Burton tried to revive their relationship and remarried, but the attempts were futile.

The US Senator from Virginia John Warner became Liz’s next husband. His wife’s contribution to his pre-electoral campaign was substantial: the woman was actively supporting Warner in 1978. It was the only thing that mattered to the man: he was not Taylor’s fan and did not appreciate her beauty which began to age at that period because the actress was consuming alcohol.

From the outside, the last official marriage looks like a fake: an ordinary worker Larry Fortensky could hardly be the star’s husband. The wedding ceremony took place in Michael Jackson’s Neverland, and the singer was the best man that day. However, it did not make the actress’s last union happy.

After the divorce, the woman said she got tired of weddings and devoted the rest of her life to charity work.

The pop king Michael Jackson was one of Elizabeth’s closest friends. There were many speculations about their affair and upcoming marriage, yet these were just rumors. Most likely, it was the great friendship between two lonely people loved by everyone but unhappy in their personal lives.

On March 23, 2011, the world learned the sad news: Elizabeth Taylor passed away. The actress conquered generations of movie lovers; her name was the synonym of the 20th-century cinematography. This woman got millions of men’s hearts and demonstrated her brilliant talent; many were interested in her private life more than in their own. After the actress’s death, her son Michael Wilding Jr. said:

“My mother was an extraordinary woman who lived life to the fullest, with great passion, humor, and love… Her legacy will never fade, her spirit will always be with us, and her love will live forever in our hearts.”

On March 23, 2011, Elizabeth Taylor passed away with her relatives around at the Cedars-Sinai Medical Center in Los Angeles. The woman was 79. Congestive heart failure was the cause of death. In accordance with the Jewish tradition, the funeral took place the next day. There was a curious incident: the beginning of the ceremony should have started 15 minutes earlier, and the rabbi Jerome Cutler said:

“She even wanted to be late for her own funeral.”

The actress had the right – because she was Elizabeth Taylor.

“I've only slept with men I've been married to. How many women can make that claim?”

“I am a very committed wife. And I should be committed too - for being married so many times.”

“The conscience of the majority of people is no more than a fear of the opinions of others.” 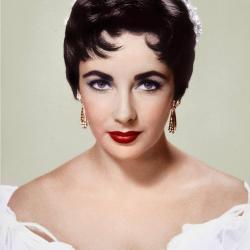