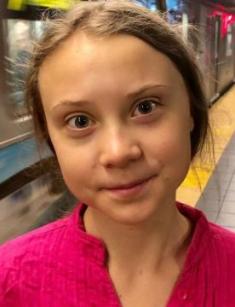 Greta Thunberg started thinking about the environmental issues from her childhood. At the age of 16, the Swedish activist has ensured the support of millions of like-minded people and began to fight against climate change.

Greta Thunberg was born on January 3, 2003, in Stockholm, Sweden. She grew up in a creative family. Her father is an actor, her mother is an Opera singer, and her paternal grandfather was a director. Her younger sister, Beata, also likes to sing.

At the age of 8, the girl started taking an interest in ecological problems. In school, she heard about animal deaths, deforestation, and climate change and wondered why no one was trying to fix it.

Later, Greta showed signs of clinical depression. After lengthy examinations, she was diagnosed with Asperger's syndrome. It is a mental disorder that is accompanied by a tendency to obsessive rituals and a lack of social skills. But Thunberg did not despair because of the illness but found positive moments in it.

At 15, Greta wrote her first article on climate change. She won a competition organized by the newspaper Svenska Dagbladet, which published the notes of a young eco-activist. Gradually, other climate-change activists started being inspired by the girl's talks. She was repeatedly invited to conferences and meetings where she spoke about the role of the younger generation in changing the future. She called for a boycott of lessons as a sign of dissatisfaction with the actions of the authorities. She was inspired by the teenage protests after a series of terrorist attacks in Florida.

However, the idea remained without support, so the girl started a single picket. Instead of studying, she came to the Swedish Parliament building, where she stood with a poster notifying of a "school strike." She also handed out leaflets in which she noted that she was doing this because adults did not care about her future. The pictures, published on Instagram, gathered a lot of like-minded people. The activist drew the attention of the Swedish media.

After the elections to the Swedish Parliament, the activist went back to school but continued to strike on Fridays. She was supported by teenagers around the world who started the Fridays For Future movement.

In early 2019, she received an invitation to the World Economic Forum, which is held annually in Switzerland. To get there, Greta took advantage of the train because airplanes emit carbon, which is harmful to the environment. The activist's parents support her views. They switched to a vegan diet, and the girl's mother refused performances involving air travel.

Thunberg's inspirational speeches were later heard from the stands in Germany, France, and the UK. She blamed the leaders of the countries for the deterioration of the environment and said that the situation could affect the younger generation. Also, the girl urged everyone to listen to the opinion of scientists who give disappointing predictions about our planet.

The editors of Time magazine noted Greta's services. She entered the rankings of the most influential people and the most influential teenagers in the world. Thunberg was named Sweden's woman of the year and was also nominated for the Nobel peace prize. In September 2019, a photo of the girl was placed on the cover of a special issue of British Vogue, edited by Meghan Markle.

The activist's words were repeatedly criticized on social networks. Many users expressed doubt about the truth of the words of a teenager with a mental disorder. Nevertheless, Greta received the support of political leaders and stars of show business.

Thunberg loves to read and writes books. Together with her family, she created the collection Scenes from the Heart, in which she included events from her biography. The girl has almost no time for personal life because she is busy with social activities.

In September 2019, the activist made a speech at the UN summit. She had to cross the Atlantic to get to New York. The girl went on the trip on a yacht accompanied by her father and a film crew. She gave an emotional speech in which she criticized existing policies to improve the environmental situation.

Greta and 15 other teenagers later filed a complaint accusing France, Argentina, Turkey, Germany, and Brazil of human rights violations because of their inaction on climate change.

Now the activist continues to fight for the environment. She maintains pages on Twitter and Instagram, which unite millions of like-minded people.