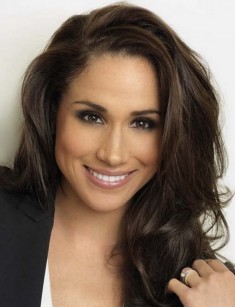 Meghan Rachel Markle, who as a stage name left only one of her names and a real surname, today is known not only for her successful career in the cinema and modeling business. The general attention was drawn to the fact that the actress Meghan Markle and Harry, the Prince of Wales, have relations.

Rachel Meghan was born in the heart of California, in Los Angeles. Looking at Meghan Markle's photo, it's not so easy to notice that she's a mulatto. Parents of Megan Markle belong to different races.

The girl's father, Tom Markle is of Irish origin. He is a well-known American cameraman, winner of the Emmy Award. And her mother Doria is African-American, who received a master's degree in sociology and clinical psychology. However, later the woman worked as a yoga instructor. Early biography of Meghan Markle was written behind the scenes of the set, surrounded by celebrities. As a child, she loved to draw stars and watch how the series were shot. When Megan was only 11 years old, she showed courage and wrote a letter to US First Lady Hillary Clinton.

In this letter, the child expressed disagreement with the attitude to the women of the creators of advertising, which is demonstrated in the breaks of daily shows of soap operas. Little Markle was sure that such advertising creates the wrong stereotype, that a woman can be only in the kitchen and all her interests are related only to cooking and cleaning. Surprisingly, the girl's letter was noticed, and advertising producers were forced to change its content.

After school, Markle entered the Northwestern University of California, where she received two specialties –Theater Arts and International Relations. While studying, she worked as a photo model, and after graduation she chose not the career of an actress, but her second specialty. The professional growth of Meghan Markle was formed in the US Embassy in Buenos Aires, where she became an employee of the Department of Public Relations. The acting biography of Markle began by accident: one of her friends invited the girl to go with him to audition of a television series, and soon there was an actress's debut on the screen.

The actress appeared on the screen for the first time in 2002 in one of the episodes of the popular medical series "General Hospital", after which for many years she combined small roles and career of a photo model. The audience drew attention to her in the film "90210 ", as well as in full-length films the thriller "Deceit", the criminal drama "The Apostles" and the comedy "Good behavior."

The actress succeeded in the legal comedy "Suits", in which has played for almost five years, as well as in such films as the American love story "When Sparks fly", the British criminal drama "Anti-Social" and the Canadian romantic comedy "Dater’s handbook. "

In 2004 the actress began relations with film producer Trevor Engelson. Later they began to live together, and seven years after their first meeting Meghan's family status changed: she married her lover and for a while became Mrs. Engelson. But after the wedding the couple lived together for only two years, and then filed for divorce. Later in 2014 the girl had relations with the Irish professional golf player Rory McIlroy.

And in 2016 there was a sensation: Meghan Markle is a new girlfriend of Prince Harry. The young people didn’t tell about their relationship for a long time, but in November Prince Harry and Meghan visited Kensington Palace, where they met with the parents of a high-ranking groom - the Duke and Duchess of Cambridge. It shows that the couple is very serious and quite possible there will be a wedding of Meghan Markle and Prince Harry. Queen Elizabeth II of Great Britain, the ruling grandmother of Harry, gave approval to this union.

It is known that Megan Markle is fond of cooking, reading and playing the game "Skrabl". Also in 2016 the actress became a designer and released her own collection of clothes under the logo of the brand "Reitmans". The young woman tells about all her hobbies on her own life style blog "The Tig.

Markle is known for participating in many charity projects. She is an official ambassador of the Canadian branch of the organization "World Vision International", which provide humanitarian aid. She also traveled to Rwanda , Africa and supported the movement for the equality of the sexes "HeforShe". In addition, Meghan is an active protector of animals. She recommends not to buy expensive elite puppies, but to take dogs and cats from shelters for homeless animals. The actress has two pets from such shelters.

Recently it became obvious, that in March, 2019, 37-year Meghan Markle and 34-year Prince Harry will become parents. Also, there appeared information that they will move to their own residence in Frogmore House in Windsor. Moreover, they will cease sharing the office in Kensington Palace with 37-year Kate Middleton and 36-year Prince William.

On the 6th of May, it became known, that Meghan gave birth to her son, but the couple prefers to keep the boy's name in a secret. Prince Harry told, that his wife felt good and was grateful for the public support. All the members of the Royal family have already been informed about the birth of the heir. 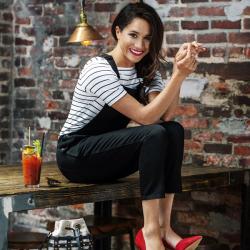