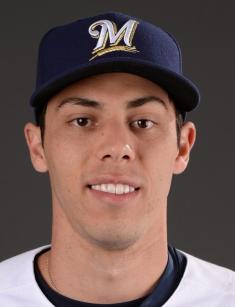 Christian Stephen Yelich is an American professional baseball player performing for the Milwaukee Brewers Major League Baseball (MLB) on an outfielder position under a number 22 on his jersey. One of his distinguishing features is that he bats left-handed and throws right-handed. But how did Yelich come to sport? Which results has he managed to achieve while working? In the article, there are answers to all your questions!

Yelich was born in Thousand Oaks, California on December 5, 1991, as Christian Stephen Yelich. His mother is Alecia Yelich. Besides him, there were two kids-boys in the family. Yelich's brother's names are Collin and Cameron. Yelich’s uncle developed an interest in the world of baseball since his childhood years.

Christian is of mixed nationality. His descendants have different roots: paternal grandfather is from the Republic of Serbia, maternal grandfather has Japan background. Among his relatives, there are also Croatian, Bulgarian, German, English, Danish, Scottish, and German people.

Also, his maternal grandfather Fred Gehrke who died in 2002, was a renowned sportsperson. Gehrke played football for the Los Angeles Rams and was inducted into the Pro Football Hall of Fame for an-off pitch contribution to his team. Yelich’s uncle designed the team’s distinctive logo with a yellow horn on a dark blue background. During his time at the University of Utah, he majored in arts.

Out of his father and mother, Yelich appears to be particularly fond of his mom Alecia Yelich who has been supportive of his career from day one. 50-year-old Alecia was born Alecia Dionne on September 20, 1968. Alecia Yelich attracted much attention in March 2017 during the World Baseball Classic game between the USA and Canada. Cameras spotted her watching from the stands and fans immediately noted her youthful appearance.

Yelich often posts photos of his mom across his social media pages. His mother was with him in 2014 when he received a Golden Glove award.

Talking about his education, Yelich attended Westlake High School. There Yelich joined its students' team. As a freshman, the player batted .373 with 25 hits and 16 strikeouts in 67 at bats. The next year, Christian batted .341 with 31 hits and 24 strikeouts in 91 at bats. In his freshman year, the sportsman batted .489 with 46 hits and struck out 6 times. Being a senior, Yelich also showed perfect stats: he batted .451 with 37 hits, nine strikeouts, and nine home runs in 82 at-bats. Due to brilliant playing, Christian Yelich got the 34th place in the list of top 100 players in the nation in college.

When it came to entering a University, Christian was offered a scholarship to perform for the Miami Hurricanes baseball team. However, that time he applied for participation in the 2010 Major League Baseball draft. There he was selected by the Miami Marlins. They signed a $1,7 million contract. Yelich played for the Gulf Coast League Marlins for six games, got nine hits and seven strikeouts, batted on average .375. As a rookie, he was noted by professional experts and advanced to Class-A. The same year, Christian performed for the Greensboro Grasshoppers with a batting average of .348. The next year, the player batted .261 with 43 hits, six strikeouts, and four home runs. He was named the Marlins' Minor League Player of the Year two times – in 2011 and 2012.

In 2013 Christian Yelich got to the major leagues from the Double-A Jacksonville Suns. The season 2014 was literally perfect for him – he batted .284 with 21 steals out of the leadoff spot for the Miami Marlins. Besides, Christian was the youngest Marlins’ player to get a Gold Glove Award. The same year, Yelich set a franchise record in terms of fielding percentage in left field, at .996.

In 2015 the sportsman signed a 7-year $50 million contract extension with the Miami Marlins. At the beginning of the season, he showed impressing stats, but in April he injured his back and had to miss half a month of games. His season's batting record is .178 – he made it on May, 22. In August the player had health problems again - he suffered a right knee injury and was included in the disabled list. Before the trauma, Christian hit .275/.343/.376 with six home runs, 29 RBIs and 14 stolen bases. Having returned to matches, Yelich still suffered pain but was still one of the best players. During his absence, he was substituted by an outfielder Marcell Ozuna. The season 2015 was closed with a .300 average. Besides, Yelich had the highest percentage (62.5%), and the lowest percentage (15.0%), of all major league hitters.

In the next season, Yelich showed remarkable improvements. On April 23, his team faced the San Francisco Giants. In the game, Christian hit three doubles - a club’s record. That time he played alongside Ozuna and Giancarlo Stanton. At the end of May, Christian didn’t take part in matches because of back spasms.

On January 25, 2015, Christian Yelich was traded to the Milwaukee Brewers in exchange for Lewis Brinson, Isan Díaz, Monte Harrison, and Jordan Yamamoto. Performing for the franchise, he batted .285 with 11 home runs, 36 RBIs, and 11 stolen bases. Yelich, who was also a reserve for the National League, replaced Matt Kemp in left field.

On August 29, his team played against the Cincinnati Reds. Then he hit for the cycle and scored six hits in the game. On September 2, fighting against the Washington Nationals, the sportsman made a grand slam - the first in his career. On September 17, 19 days after their first meeting, the Milwaukee faced the Cincinnati Reds again. Christian hit for the cycle one more time and became the fifth player in MLB history to hit two cycles in the same season and the first player in MLB history to do so against the same team.

On March 31, 2019, Yelich became the sixth player in MLB history to hit a home run in each of his team's first four games.

On September 10, 2018, he was selected to play with the MLB All-Stars at the 2018 MLB Japan All-Star Series, but he later withdrew from the event.

Christian Yelich is very secretive about his personal life and girlfriends. There are lots of gossips about his probable wife; but there is no precise information about whom he might possibly be in a relationship with. The only thing we know for sure is what Yelich has never been married.

However, in July 2016, an NSFW video implicating Yelich was posted on Twitter by an account named @RealMarlinsFan. The account user claimed that the man in the video who appeared to be engaging in an oral sexual activity with an unidentified woman was Yelich. In an interview, he said the video was 100% false and defamatory.

Yelich and Ryan Braun have a couple of things in common (besides being on the Brewers, of course). Both were born and raised in California and received scholarship offers to play at Miami. While Braun did join the Hurricanes, Yelich, who accepted the offer after spurning another from UCLA, decided to sign with the Marlins instead after he was drafted. In addition, both Yelich and Braun signed hefty contract extensions early in their careers. Yelich signed the second-largest deal ($49.75 million) for a player who had two or fewer service years in MLB; Braun has the No. 3 contract ($45 million). Andrelton Simmons, who also was dealt after signing his extension, is No. 1 ($58 million).

Yelich’s net worth is evaluated at $20 million. He gets a $7 million salary.

Due to Yelich's high career stats, Christian has been honored by the following awards: