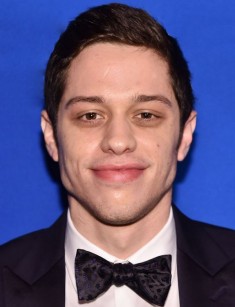 Pete Davidson is a successful American stand-up comedian, the first participant in the cult television show Saturday Night Live, a comedian by profession and vocation. He was born in the 1990s of the 20th century.

Peter Michael Davidson (the full name of the actor) was born on November 16, 1993, in Staten Island. This borough of New York City differs from the others due to its lower population density and slow paced life. His parents are Amy (née Waters) and Scott Matthew Davidson, and he has a younger sister, Casey. His father of Jewish heritage and his mother is of Irish ancestry. Davidson was raised Catholic. His father worked as a fireman and died in service during the September 11 attacks.

The boy was profoundly affected by the loss, so he quarreled, act out in school, ripped his hair, until he was bald. Later, Pete said in an interview that he struggled with suicidal thoughts as a teenager and that the music, in particular, the songs of rapper Kid Cudi, helped him. Pete has a fire badge number, 8418, tattooed on his left arm in memory of his father.

The biography of the artist has several high schools. He attended St. Joseph by-the-Sea High School, where actress Sheena Colette and baseball player Matthew Festa also studied. Then he was in then Tottenville High School, where singer Bebe Rexha and wrestler Ricco Rodriguez studied. The last on the list was Xaverian High School, where the artist finally graduated in 2011. His mother Amy worked there as a school nurse. Following high school, he enrolled at St. Francis College, a private institution, in Brooklyn Heights, but soon dropped out.

Pete made his stage debut at a bowling club in Staten Island at the age of 16. He performed as a stand-up comedian when his friends dared him to take to the stage. The artist admitted that he did it after smoking marijuana. In subsequent years, Pete also used this drug medically as an anesthetic because he had Crohn's disease, an inflammatory bowel disease.

He made his screen debut in 2013, playing in the MTV comedy series Failosophy. The same year, he appeared in PDA and Moms, participated in several episodes of the MTV2 reality TV comedy series Guy Code. At the same time, he recorded a stand-up performance in the program Gotham Comedy Live, airing on the pay-per-view channel Comedy Central.

When the comedian returned to MTV2, he performed in Nick Cannon's sketch show Nick Cannon Presents: Wild 'N Out. He continued his collaboration with Comedy Central playing in the comedy series Adam House DeVine's House and Comedy Underground with Dave Attel, participated in the ABC Jimmy Kimmel Live!, a late-night talk show. He starred in the Fox police sitcom Brooklyn Nine-Nine, which won the Golden Globe Award.

In 2014, he joined the cast of the cult show Saturday Night Live (SNL). The late-night musical humor series has been broadcast since 1975 and is a brand of the NBC channel and American television in general. Pete is the first SNL member to be born in the 1990s, as well as the youngest comedian invited to the project in its history. Davidson was 20 years old at the beginning of cooperation.

The audition was organized by comedian Bill Hader, who received four Emmy nominations for SNL. Pete met the actor on the set of Judd Apatow’s film Trainwreck, where Davidson played a bit role. Hader talked producer Lorne Michaels about the talented young man. His acting in the show received positive reviews from critics.

In 2015, he participated in the project Comedy Central Roasts, a humorous series in which celebrities were mocked. His "roastee" was the famous singer, Justin Bieber. In 2016, he was on the Forbes 30 under 30 list.

Thanks to the ups and downs of his personal life, the artist became no less famous. A comedian's love affair with renowned singer Ariana Grande has become one of the most hotly debated topics in show business.

Pete first met singer on SNL in 2016. At that time both had relationships. Davidson dated little-known actress Cazzie David, and Grande dated rapper Malcolm James McCormick, best known by his stage name Mac Miller. The singer and rapper’s relationship lasted about two years. Besides, the couple recorded a song and shot a music video.

The couple broke up in May 2018, a few months before the rapper’s death of an overdose because the singer was addicted to drugs. He devoted the last album to Grande. Many people have blamed Ariana for the death of the artist, who had a tough time after the breakup, but the singer snapped nose off the haters on Twitter, saying that

“How absurd that someone should stay in a toxic relationship because he wrote an album about them."

Davidson broke up with Cazzie at the same time as Grande separated with her partner, and after a few days, the paparazzi took photos of the new couple. It was a torrid love affair. Within a few months, they started with the pictures on Instagram and ended in a marriage proposal.

The lovers also had matching tattoos, and the comedian had four symbols dedicated to Ariana tattooed on the body. In June, the couple announced their engagement and began preparations for the wedding. Fans of the world-famous star were wary of the news, which did not prevent the couple from getting along like a house on fire. Davidson moved to Grande’s apartment in New York City, where he lived until October when the young people reported that the engagement was called off.

Now their separation is actively discussed in the media. The reason for it is unknown.

On the one hand, there is a version that the young people took a break in relationships that developed too rapidly. On the other hand, the reason was Grande’s feelings for ex-lover Mac Miller.

Pete Davidson has a net worth of $2 Million. 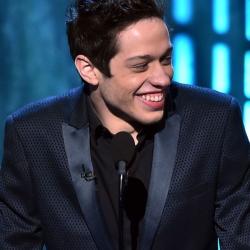