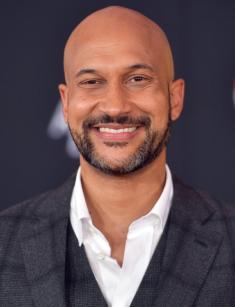 Key, 48-year-old successful actor and philanthropist, started his career, as it is usually the case, being a student. After appearing in several short commercials, he began getting more serious roles in such pictures as Key & Peele and Mad TV which brought him an enormous popularity. What else does Key have in his filmography? There is a full biography of the celebrity in the article. Read right now!

Key's birthplace is Michigan. He was born in the family of Leroy and his wife, Carrie. Speaking about Key's nationality, he was of a mixed race – his dad was black and mom, in her turn, was white. The two sent the kid to an orphanage where he spent only several months. The spouses Michael and Patricia adopted Key when he was an infant. Remarkably, he had two siblings through his real parents. However, Key had never known about brothers before their death.

As for Keegan-Michael's college education, he has a degree in Fine Arts. Being a student, Key already started building his acting career – he began starring in various commercials which supplied him with a reputation of a rising star. So, movies’ directors noticed his potential and invited to act in their projects.

One of the most significant projects Key appeared in was Mad TV - the actor joined the show during season 10. Interestingly, the celebrity took part in an audition for a role in the series alongside Jordan Peele. The judges had to pick up one actor and made a choice in favor of Key because of his excellent acting skills. Remarkably, the star didn't have a certain character to play on the program – he was seen appearing in various roles.

Fans especially liked him acting as Trainer Hines – a sports instructor working at a high school who is often mixed up with scandals with students and colleagues. In one of the episodes, Key is said his ancestors are owners of the Heinz Ketchup company. Besides, Key is known for portraying Dr. Funkenstein. Moreover, the actor parodied various celebrities of today – singers, producers, actors, dancers, and politicians.

Later Keegan-Michael was cast of the series entitled Key & Peele – the show premiered at the beginning of 2012 and consisted of 5 seasons canceling in September 2015. For his starring as Barack Obama's assistant on the show, the celebrity was invited to a dinner at White House by then-president in 2015.

Shortly after fans could see the celebrity among actors playing in the comedy named Friends from College – he acted as Ethan Turner. Series' plot is about friends who know each other since school years.

In his screen career, Key has worked as a host of the show entitled The Planet's Funniest Animals broadcasted on Animal Planet channel and of the program Brain Games.

In the 2000s Key took part in the shooting of the video named White & Nerdy. 2009 brought him a position of a host of Big Saturday Night.

Key and one of his colleagues were seen on pages of The New York Times Magazine. Around that time he acted in the horror picture entitled Hell Baby.

2014 was marked by Key's role in the series named Playing House and in the drama movie Fargo. Besides, the same year he added Horrible Bosses 2 and The Lego Movie to the list of the projects he has appeared in.

He was also seen taking part in the program Hunt the Truth aimed to discover secret details of the Master Chief's life.

The celebrity gave his voice to a character of The Star. 2017 brought the actor his first Broadway role – he appeared in Meteor Shower.

As of Key’s recent works, he voiced Kamari, a character of The Lion King premiered in 2019.

Keegan-Michael Key’s net worth is evaluated at $8 million.

The actor had a wife – Cynthia Blaise. The two tied the knot in 1998 and annulled their marriage in 2017. One year later, Key and his new partner Elisa Pugliese began dating and shared vows. Their wedding ceremony took place in New York.

Keegan-Michael is a very religious person since his childhood. He has tried out various faiths but nowadays supports Christianity.

The celebrity has contributed to the Youth Storytellers Organization.

Besides acting, Keegan-Michael Key contributed to the world's culture. So, he co-opened Planet Ant Theatre located in Michigan. Additionally, he helped in elaborating of the Detroit Creativity Project – the program aimed to show young students that improvisation is a key to improving their interaction abilities. Its creators, including Key, arrange specialized pieces of training for the youth. This program receives majorly positive acclaim.