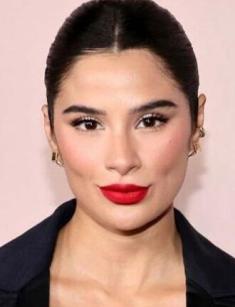 Diane Guerrero, who is a popular voice and movie actress, was born on the 21st of July in 1986. Diane is better known for starring in such projects as Doom Patrol, Jane the Virgin, and Netflix's Orange Is The New Black. Diane also gained a lot of fame after she voiced Isabela Madrigal, a character from Disney's Encanto movie. She is of American nationality and Colombian ethnicity.

Raised in Boston, Massachusetts, actress Diane Guerrero was born into an ordinary Colombian family. Her birthplace was the city of Passaic, which is located in New Jersey. Diane has a strong belief in God and regularly does political activism.

Interestingly, even though Diana is a legal citizen of the US, her other family members are not. Her parents relocated to the US, but, when Diane was 14, they were all deported back to Colombia. She lived in various neighborhoods in Boston, and other Colombians took care of her. She went to Boston Arts Academy. Her school activities were singing and playing jazz. Then she completed her high school education and enrolled in a college where she studied political science and communication.

In 2010, Diane decided to focus on her acting career. She once appeared in a music video for Louie Bello's song. Next year she met her future manager, Josh Taylor, at the acting studio. Her debut was an appearance in the short movie, Detour, in 2011. Throughout her career, Diane starred in over 29 projects, some of them were voice acting projects (Elena of Avalor, Encanto).

She got famous and popular after starring in such projects as The Orange Is The New Black (produced by Netflix), Doom Patrol, and Killerman, and after voice acting in the Disney movie Encanto.

Not much is known about her personal life. Many sources say that she is not dating anyone now.

Diane is a political activist who stands for immigrant reform. Moreover, she is an ambassador for the Immigration Legal Resource Center. She stands for immigrants' rights and equality because her parents were deported from the US when the actress was only 14.

Except for her acting career, Diane is also a musician. Here is her full discography: