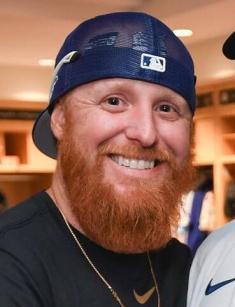 The future celebrity was born on November 23, 1984, in Long Beach, California — and not Austin TX, as some sources might state.

Justin's mom's name is Betsy. His dad's name is John. The sportsman has one younger sister whose name seems to be Jillian.

Justin is rumored to be a brother or cousin of Courtney Turner, a prominent ice hockey player, but it's not true.

At school, this guy collected several awards for his outstanding baseball skills. In the university, he majored in kinesiology.

Justin's stats are always impressive. He often competes against such powerful opponents as the Houston Astros or Boston Red Sox. Corey Seager and Albert Pujols used to be his teammates.

Thousands of fans would be eager to purchase Justin's jersey. He has released a bobblehead of himself and recorded a compelling commercial for it.

Justin joined this team in 2006. The sum of his signing bonus reached $50,000. Alternatively, he could have become a member of the New York Yankees the year before but rejected this opportunity.

In 2008, Justin's previous team decided to trade him to the Orioles. The next year, he debuted in the major league.

The Mets onboarded him in 2010. In three years, Turner became a free agent.

In 2014, Justin joined the Dodgers. First, they accepted him to their minor league roster. The next year, the sportsman was promoted to the major league.

In 2020, this celebrity hit the news in a scandalous way. His COVID-19 test was positive and he couldn't take part in the game. However, he badly wanted to be present in a celebratory picture with the team. That was a reckless move. The media criticized Justin for putting his colleague's health at risk. The sportsman had to apologize publicly.

The next year, he re-signed with the Dodgers for two more years in exchange for $34 million.

The star met his future wife Kourtney Pogue in 2012, at an event in Los Angeles. They enjoyed a long conversation and then, Justin had to leave for New York to play there. Soon, he called Kourtney and invited her to spend time with him at his parents' house in LA.

They tied the knot in five years, in Mexico. Now, the couple lives in LA.

Kourtney studied psychology at the university. Then, she worked as an actress.

The sportsman and his wife established a charity organization. It supports young baseball talents, kids diagnosed with severe diseases and homeless veterans.