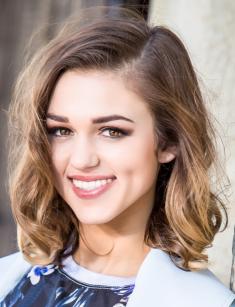 Sadie Robertson is a charming actress and reality television star on the A&E show Duck Dynasty. Sadie is the author of several books that brought her fame and recognition. She also is a happy woman who is grateful for her present relationship with her husband Christian Huff.

Sadie Robertson was born in Monroe, Louisiana, U.S. Her grandfather's name is Phil Robertson, he is a founder of the company Duck Commander, the brand of a duck call and the name of the company in West Monroe, Louisiana, United States. Her parents are the company's CEO. Sadie is not the only child in the family, she has five siblings. She is proud to have such a big family, in which every family member supports each other.

She got an education at the Ouachita Christian High School and started a career as a singer.

At the beginning of her career, Sadie had performed a song named Away in a Manger with a popular American bluegrass-country singer and musician, Alison Krauss. The song was included in the family's bestselling album, Duck the Halls: A Robertson Family Christmas.

Sadie has always been dreaming about the acting career. Her attempts were successful, and she appeared in two movies: God's Not Dead 2 and I'm Not Ashamed. After that, she decided to go on tour. In 2016, she made her dream come true and went on "Live Original Tour". Next year she performed in 45 cities!

In 2014, Sadie became popular as an author of the book, which received excellent reviews. It was a book about faith and Christian values with the name Live Original. Sadie later published her second fiction book, Life Just Got Real: A Live Original Novel. She was named one of the greatest young writers because her books were warmly received all over the world. In 2018, she continued writing and issued a sequel to her first book, with a name Live Fearless, which also was a big success for her.

The famous singer and writer describes herself as a happy woman. In June, 2019, she had an engagement with her boyfriend, Christian Huff. The two married in November, 2019 at her family's farm in Louisiana. At the wedding, Sadie looked elegant as she made the most of her trim figure. The bride had two dresses: a 'very classic, all-white' ceremony gown from Kleinfeld's with matching veil and gloves, and the second was a 'fairytale'-like Sherri Hill design for the reception. The ceremony took place outdoors with small lights everywhere. It was officiated by Pastor Louie Giglio. Sadie and her fiance were dancing on a black-and-white floor in images shared by some of their 600 guests on social media.

Speaking of her happy relationship now, Sadie told the story in her "Live Original" blog about a painful mistake from previous relations with ex-boyfriend Blake Coward. The celebrity revealed to the public that it started well, but eventually, they had a lot of problems. Sadie wants women to understand and see the true love and be patient. She thinks that passion and emotions are not the basis of a true relationship. From her point of view, the partners have to be friends and support each other.

In 2016, Sadie supported Donald Trump during the 2016 United States presidential election, as did her father.

The singer is well known for her engaging smile and energetic personality. She was chosen to be an ambassador of apparel. The brand Wild Blue was proud to offer her to be a part of a clothing line with the message of female empowerment, confidence, and authenticity.

Sadie is popular on Instagram over 3,5 million fans and people who have similar views.

The net worth of the famous writer is estimated at $500 thousand.

Dancing with the stars

Sadie took part in the show Dancing with the Stars Season 19. The professional dancer Mark Ballas was her dance partner. She demonstrated great results, and the duo finished the competition in second place.