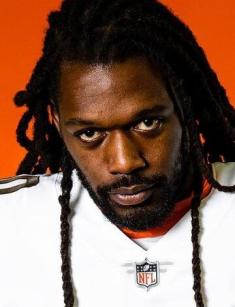 Jadeveon Clowney who was born on February 14, 1993 is an American professional football player. He is a defensive end for the Cleveland Browns of the NFL. Before entering his current team, Clowney spent 4 years with the Houston Texans, and also had short stints with Seattle Seahawks and Tennessee Titans.

The defensive end hails from Rock Hill, South Carolina. His parents' names are David and Josenna. Jadeveon's father was absent from his life because he was serving a 12-year sentence for robbery and caught an attempted murder charge soon after his release. Clowney doesn't have any brothers or sisters, but his cousin, Demon, is a football player as well.

In high school, Jadeveon initially played as a running back, but then became a defensive end. He was considered one of the most talented players in his class. Jadeveon committed to the University of South Carolina and its football team, the Gamecocks. He played in SC for three seasons, starting 23 of 36 games.

The defensive end, who made a name for himself by delivering big hits, was considered one of the most promising players in the 2014 NFL Draft. Clowney became the 1st overall pick by the Houston Texans. On June 6, the defensive end and the team agreed to a 4-year rookie contract. He made his professional debut in a game against the Arizona Cardinals. Clowney spent five seasons with the team.

In August 2019, the player was traded to the Seahawks, where he played for a season.

In September 2020, Jadeveon signed a short-term contract with the Titans. The player wanted to go to the Baltimore Ravens, but the team didn't express enough interest in signing him. He was placed on reserve two months later after sustaining a knee injury.

The defensive end signed a one-year contract with the Browns in April 2021. After proving himself during his first season with the team, Clowney's contract was extended by another year. In September 2022, the defensive end sustained an ankle injury.

On January 6, 2023, he was not allowed to attend practice after making critical statements about the team. The player also gave an interview, in which he mentioned that he will not be re-signing with the Browns because they favor Myles Garrett over him.

Clowney's total NFL career stats are 310 tackles, 43.0 sacks, one interception and four defensive touchdowns. According to the Sportrac website, the defensive end has made over fifty million dollars in salary as a professional player.

The player is in a long-term relationship with makeup artist Najah Re. The couple has a son named Jahlil.

In 2020, Clowney made news after he injured Eagles quarterback Carson Wentz. The video of the incident angered football fans, but the hit was ruled to be accidental.

The defensive end was named to the Pro Bowl for three consecutive years. In 2012, he became the SEC Defensive Player of the Year. Four years later, Clowney earned a second-team All-Pro.