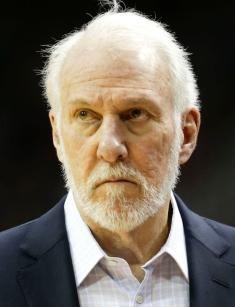 He is a widely recognized coach and manager.

He was born in East Chicago. His ethnic background is mixed, his father was Serbian and mother was Croatian.

During his college years, the young man played basketball for the university team. He displayed a leader's skills and was called the team's captain. In 1970 he graduated from the university, after graduation he served in the American army for five years. During his service, he didn't stop playing basketball. As a skilled athlete, he was selected to the force team. Then he worked in the Olympic committee, as well as at a prep school. Then Gregg graduated from the Force Academy with a master's degree in physical education.

After receiving the master's degree in physical education, he began working as a coach. His first team was Pomona-Pitzer. He coached the team and lived in Claremont for eight years. He successfully trained the team leading it to the conference championship. In 1988 the coach joined the Spurs. On that position he established himself as a top assistant coach. However, in 1992 the whole coaching staff was fired. Then Popovich worked with the Warriors.

In autumn 2019, the team was involved in the incident when the general manager of the team Daryl Morey, expressed support to the pro-democracy movement in China via tweeter. Chinese media partners responded with the refusal of broadcasting of NBA games in Shangai and Shenzen. Despite that statement that could negatively reflect on the team, Popovich supported Daryl’s statement.

The seventy-years-old coach signed the three-year contract. In the interview, Popovich hinted about his possible retirement, but no one knew precisely he would retire in 2020 or continue working.

The coach gained not only full recognition but also the athlete's respect and love. In 2018 Draymond Green made a heart left message after the game "Much love, Pop" during the press conference. The coach also allowed himself to send messages to the athletes in the interview too. Thus his statement about Tim Duncan titled the headlines in 2019. He said, "Tim Duncan doesn't know a lick about coaching. I don't even know why I hired him. He's given me a paycheck for 19 years, so I was kind of obliged to pay him back". The other comment was rather outspoken when the coach named Leonard Kawhi, "not a leader of anything." Later he made a reference to him and his "group," telling that the journalists should ask some questions directly to him. Besides, he regretted his words.

In January 2020 the coach credited Erik Spoelstra for his unpredictable breakthrough in the latest season. Once he said, “He is a fundamentalist. He's a task master. He has high standards and he makes people accountable. They execute on both ends of the floor and they play hard. That's something in the water here. That's what they do.”

He was married to a woman named Erin. She died in 2018. The coach is known as an outspoken figure. He widely criticized the current American president Donald Trump. His quotes are widely discussed on the Internet. He said, "I just wish he was more … had the ability to be mature enough to do something that really is inclusive, rather than just talking and saying, 'I'm going to include everyone."

He also supported the Women March in 2017.

His net worth is estimated at $30 million. His annual salary was $11 million, which made him the highest-paid coach.

The professional coach's impressive fortune allowed him to make significant contributions to charity. He actively collaborates with charities as a volunteer and as a donor. In one interview, the coach gave a brief answer to the question of why he did it. He said, "Because we're rich as hell and we don't need it all, and other people need it. Then, you're an a-- if you don't give it. Pretty simple."

His record made him one of the most successful coaches in history. He overheld 1262 victories, and 597 loses. He is also named the longest coach who held this position from 1996 till 2019.