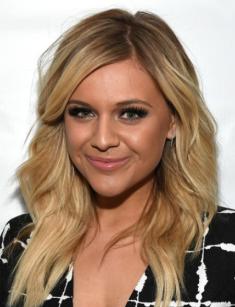 She is a talented singer and songwriter. At the age of twelve, Kelsea discovered her talent and decided to pursue a music career. At the age of 19 she signed her first contract with the independent record label and got early success. Later her fame spread around the country. The growing fan base had made her highly demanded singer. Besides her career, she has a family and looks forward to kids.

Though she was more inclined toward dance in her early years, as a teenager, she became obsessed with music. At the age of 12, accidentally she discovered a talent for songwriting. She wrote a song for her mother that proved to be very touchy and beautiful. This was a turning point in her life as she realized her calling.

She was born on the 12th of October in 1993. The singer is the only child in her family. Her father and mother raised her in Knoxville. At the age of three, she began dancing. Kelsea had attended the dance school until she was thirteen. As a result, she was proficient in various dance forms and was a graceful dancer. But then she got bored and stopped dancing when she was 13.

She entered the university in her hometown but the singer dropped out two years later.

Her career began when she was 19. Kelsea began singing country music and brought fresh blood in the traditional music style. Her talent was so vivid that she immediately reached her first success. The singer signed the contract with the recording label and gained early experience as a professional singer. In 2015 the singer released her first album. She collaborated with several artists. Her single was included in the top country songs.

In one interview she confessed that was very naïve in the beginning of her career. However she thought that her special gift, which helped het not to think how to get success and simply believe that everything would be ok:

"There were so women in country music at that point that I just thought, 'Of course I can do this'. I didn’t know at the time, really, that there was a gap of women that weren’t on country radio. But I was naïve to it. I didn’t think that that was going to be a conversation.”

In 2017 she became a highly demanded artist as a result of the highly successful debut album. That year she released her second studio album. She launched her tour around the country and promoted her music to a broader audience. Her net worth is estimated at $6 million.

In 2019 it reported that the singer finished work on her third album. This information was confirmed by the singer. he released her first single from the new album in autumn. The new son was positively accepted both by critics and the general public.

The country singer confessed that she was influenced by country artists as well as pop music. She was raised on pop music and hadn't any idea of what country music was. The singer told that the most considerable influence she gained by Shania Twain.

In 2016 she began a relationship with the Australian country singer – Morgan Evans. That year the couple engaged. A year later, they married. She is a dog lover. In 2019 the couple gave an interview and confessed that they looked forward to kids.

2015 and 2017 were successful years for the young singer as she won her first awards – as a rising star and favorite country singer.