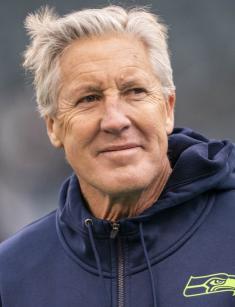 Pete Carroll has had a long, difficult and winding way to success. Originally, because of lack of experience and knowledge, he couldn’t find a permanent job, often changed sport to work for. 2000 is thought to be a real breakthrough in Carroll’s career – he was hired by USC Trojans and eventually got a reputation of a prominent trainer. Read below more facts of Pete Carroll’s life and career!

Pete Carroll’s birthplace is California. He was raised in the family of James Carroll and his wife, Rita. As for Pete’s nationality, he is of mixed race – he has a fusion of Irish and Croatian blood.

From the very infancy, he was inclined to sports. However, initially, he suffered a lack of physical growth and couldn’t take up any kind of sport professionally. Eventually, he referred to a doctor’s help and began playing football on various positions.

Having completed his school education, he entered a college where he continued his sports career. Interestingly, Scott Boras was his classmate. After university, the sportsman joined the Honolulu Hawaiians squad to visit a training camp. However, he didn’t remain with the team because of an injury and other health issues. To earn a living, he became a seller but failed to make much money and left the position.

Shortly after he began working as an assistant of his former head coach named Chester Caddas. While working, the sportsman also was studying at a university to get his Master’s.

Having received his diploma, Carroll began officially working at the Arkansas University. His salary was estimated at $190 a month.

In 1979 he got the position of a coach of the college located at Iowa. The following year, he worked alongside Monte Kiffin at the university in North Carolina.

1984 was marked by Pete Carroll’s joining the NFL being a coach working for the Buffalo Bills. One year later, he began training members of the Minnesota Vikings. Around that time, he took part in a competition for the place of the head coach of Stanford University team but lost. Continuing working with the Vikings, he was noticed by the New York Jets managers who offered him better conditions. As a result, he changed the place of working and spent there four years.

1994 brought Pete Carroll a position of the head coach of the Jets. In their first game, the franchise made a 6-5 score due to his help. However, in Week 13 the Jets were fully beaten, and Carroll was eventually fired.

The following year, he began working as defensive coordinator for the San Francisco 49ers, later transmitted to the New England Patriots as a replacement for their former head coach Bill Belichick who had left the franchise because of some disagreements with its managers. Under Pete’s guidance, the team conquered the AFC East division title in 1997. However, the following two years they failed to advance to the playoffs. As a result, Carroll left his position. According to the team’s managers, it was difficult for them to farewell the coach.

2000 is the beginning of Carroll’s career with USC Trojans. They signed a 4-year deal with the franchise. He was hired as a substitution of their former coach.

Carroll got through a real competition to work with the team. When he, at last, was chosen to train Trojans players, it evoked lots of scandals and controversies. It was because by the moment Carroll had not worked with college teams for more than ten years – he lacked the experience to work with a squad of that format. Also, many students themselves didn’t support the idea of training with him. However, one year later, they changed their mind, having witnessed Carroll’s professionality and desire to reach high results. So, under his guidance, the Trojans succeeded to become winners of several tournaments.

In 2010 Carroll left his position to work with the Seattle Seahawks. While serving for the team, Carroll has evoked several controversies. So, when its player Earl Thomas suffered a serious injury and John Schneider (squad’s manager) and Carroll denied to sign a contract extension with him, the sportsman gave them middle finger in front of the crowd. As a result, Thomas became a free agent.

Pete Carroll’s net worth is evaluated at $30 million. As for his salary, it is increasing every year. In 2018 the coach has earned $7 million.

When it comes to measures he takes to train players, they are often named ‘aggressive’ ones. Once journalists interviewed athletes, who have ever trained under Carroll’s guidance. They shared the coach liked to tell jokes and funny stories, arrange pranks and various surprises to make training atmosphere more interesting.

Pete Carroll opines coaching is not only occupation for him, but the style of living. According to him, it is precisely what he wants to do in his life.

Speaking about Pete Carroll’s private life, he has a wife named Glena. The two met while being teenagers. The spouses have three kids – 2 sons and a daughter. Besides, they have a grandchild.

Several years ago, Carroll became aware of murders happening in the district he lived. He succeeded to arrange a meeting with politicians and social activists (including David Goggins and Michael Gervais) to discuss this issue, to pay attention to all the crimes of that place. They came up with launching an organization named A Better LA aimed to reduce the level of criminals around Los Angeles.