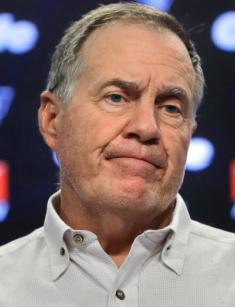 William Stephen Belichick (mostly known as Bill Belichick) is an American football coach currently serving as the head coach of the New England Patriots of the National Football League (NFL). In his career, he led the team to six Super Bowl titles (2002, 2004, 2005, 2015, 2017, and 2019), the most for an NFL head coach.

He moved on to assistant-coaching positions with the Detroit Lions and the Denver Broncos before joining the coaching staff of the New York Giants in 1979. Before Patriots, the coach has worked for many other teams.

Bill Belichick’s way to success is interesting and worth reading!

Bill Belichick’s birthplace is Nashville, Tennessee – he was born there on April 16, 1952, to the family of Jeannette (Munn) and Steve Belichick (born Stephen Biličić). Bill was named in honor of his godfather College Football Hall of Fame Bill Edwards. Bill has Croatian roots. His paternal grandparents moved from the Croatian village of Draganić, Karlovac, in 1897, to Monessen, Pennsylvania.

Bill Belichick passed his childhood in Annapolis, Maryland – there his dad worked as an assistant football coach at the United States Naval Academy. In his future admissions in a post-game interview, Bill Belichick named his father one of his most important football mentors.

As a baby, Bill became interested in sport and tried to combine playing with studying.

He studied at Annapolis High School from which he graduated in 1970. His classmate was Sally Brice-O'Hara. Studying there, the future famous coach was an outstanding football and lacrosse player. Later he entered Phillips Academy in Andover, Massachusetts, for a postgraduate year, to improve his grades and test scores to be admitted into a quality college. The school awarded him 40 years later by inducting him into its Athletics Hall of Honor in 2011.

Later Bill became Wesleyan University’s student. There he joined its students’ football team, played lacrosse and squash. In 1975 Belichick graduated with a bachelor's degree in economics.

Having graduated, Bill Belichick began his coaching career. So, in 1975 he was hired as an assistant to head coach, Ted Marchibroda. The next year, he started working as assistant special coach of the Detroit Lions. He worked with the franchise till 1979.

That year the coach moved to the New York Giants as a defensive assistant and spent there 12 years of his career. While working there, his colleague was head coach Ray Perkins. Belichick advanced the team to victories of Super Bowl XXI and Super Bowl XXV.

In 1991 Bill Belichick changed the team he worked for. So, he began serving as a head coach of the Cleveland Browns. Totally, Belichick compiled a 36–44 record and led the team to the playoffs in 1994, his only winning year with the team. In 1995 Browns president Art Modell announced he would move his franchise to Baltimore after the season. He said Bill Belichick would train a new team. However, despite the promises, Bill was hired the next year.

So, he moved to the New England Patriots for the 1996 season.

In 1997 Bill was hired as an interim head coach of the New York Jets.

In 2000 Belichick joined the New England Patriots. He got near-complete control over the team's football operations. In his first year, Bill’s team failed to get to the playoff. Remarkably, as of today, it is the only Belichick’s unsuccessful season.

Since then, he has led the Patriots to 16 AFC East division titles, 13 appearances in the AFC Championship Game, and nine Super Bowl appearances, with a record six wins. Belichick has won eight Super Bowl titles in total from his combined time as an assistant and head coach.

In comparison to the franchise’s former coaches, Bill Belichick is named the best one.

In his career, Bill Belichick has had some arguments with Lawrence Taylor. He is also often compared to another famous coach – Andy Reid, working for the Kansas City Chiefs.

Belichick’s net worth is evaluated at $35 million.

Bill Belichick has been married for only one time in his life. His ex-wife is Debby Clarke Belichick, who is the mother of his three children.

The woman was his high school sweetheart. Nowadays she runs an interior design firm in Massachusetts.

Having divorced with Bill, Debby, along with a female friend, opened The Art of Tile & Stone, a new tile store in Wellesley which offers everything from design to installation of new stone.

Their three kids have built a successful career on their own. The two Belichick’s sons work for the Patriots. Amanda, Stephen, and Brian – all ended up playing lacrosse in college. Amanda and Stephen “played lacrosse at UMass and Rutgers respectively,” and Brian played at Trinity College in Connecticut.

Stephen Belichick is currently working as the Patriots’ safeties coach. Debby and Bill’s youngest son, Brian, who studied at Trinity College where he also played lacrosse, was hired as a scouting assistant for the Patriots and is now a coaching assistant as well. Amanda Belichick is a college lacrosse coach.

After the divorce, Bill Belichick started a relationship with Linda Holliday.

Belichick and Holliday have been together for so long and have made so many appearances together – it made many people think about their marriage. However, Belichick has never answered the question about their probable tying the knot (as far as the public knows).

Holliday is a mother to twin daughters, Ashley and Katie Hess. The girls graduated from Trinity College in May 2015. They currently run a fashion blog (that is undergoing some sort of facelift) and have been spotted at many Patriots games over the years.

Besides sports career, Bill Belichick has been involved in show-business. In September 2011, a two-hour documentary following Belichick through the entire 2009 season was aired as the first two episodes of the documentary series A Football Life. The picture was the most famous documentary in the history of the NFL Network.

Later, Bill Belichick got the role of a mourner at a funeral in an episode of the drama Rescue Me.

In the video game series, Belichick’s name is not used because he is not included in the NFL Coaches Association, which licenses the game. Remarkably, Belichick is the only NFL head coach who has chosen not to join the association.

The Belichick Plaza at Wesleyan University (formerly Warren Street lobby) was dedicated in recognition of the leadership and generosity of Bill Belichick.

Belichick is well known as a huge fan of the rock band Bon Jovi, who visited Patriots training camp on August 14, 2006. Their track "Bounce" is dedicated to Belichick.

Belichick's "We're on to Cincinnati" press conference during the 2014 season is spoofed by comedian Frank Caliendo.

A glowering Belichick is shown in the 3rd episode of the 28th season of The Simpsons entitled The Town (2016).

Belichick is the NFL's longest-tenured active head coach, as well as the first all-time in playoff coaching wins with 31 and third, in regular season coaching wins in the NFL with 261. He is one of only three head coaches who have won six NFL titles. He was named the AP NFL Coach of the Year for 2003, 2007, and 2010 seasons.