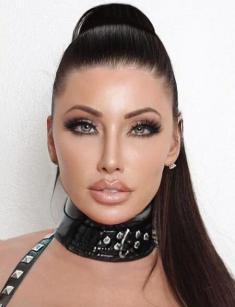 The future celebrity was born on March 3, 1987, in Marysville, Ohio, as Holly Niederkohr. Now, she lives in Los Angeles.

Her dad's name is Dan, he's a doctor. Her mom's name is Sandy, she's a golf champion. She has one brother but has never publicly revealed any information about him.

In 2009, this lady got a college degree in journalism. First, she had to report on homicides and tornados. She tried to switch to a sports channel and managed to do it on the second attempt. In 2011, she joined N.B.C.'s Golf Channel and left it in four years to Fox.

In 2019, after leaving Fox, Holly launched her hollysonders.com website where she sells hot pictures. She's active in the Cameo service where users can pay her to record custom-made videos for them.

This gorgeous-looking lady earns a lot of money on OnlyFans. In 2023, she offered Clay Travis to make a collaboration with her on that platform.

Holly's mom introduced her to golf. At school, she was also good at basketball and baseball.

Sonders had to finish her impressive sports career because of a knee injury. She was unable to walk for months.

Now, Holly devotes a lot of time to fitness and sticks to a diet to maintain her fabulous looks. In 2020, she launched the TeamUp Fitness app. However, the star isn't too strict with herself. She drinks spirits from time to time and can smoke a cigar.

Blair O’Neal is the fellow golfer model with whom Holly is most frequently compared.

In 2012, Holly walked down the aisle with Erik Kuselias, a fellow TV personality who's notorious for his love adventures. They divorced in four years. Holly found out that her spouse had another wife and three kids, so he wasn't legally allowed to get married to someone else.

Her next partner was Kliff Kingsbury, a football coach. They had a brief affair in 2019.

The same year, Holly got a new boyfriend, Vegas Dave, whose real name is Dave Oancea. He's a sports gambling and crypto enthusiast. They first met each other when partying at a strip club and got engaged soon. They got quarantined together in Mexico during the pandemic but suddenly decided to break up. Dave explained it was due to the fact that his girlfriend wouldn't accept his business principles. Club Pro Guy publicly criticized Sonders for falling in love with such a dubious personality and encouraged her to change her perception of him.

Currently, Holly is dating Oscar De La Hoya, a boxer. They got to know each other when the former interviewed the latter in 2021. Holly made a back tattoo of Oscar and he tattooed her on his shoulder.

Holly has never had kids with any of her partners.